The 48-day standoff between the MSG Network and Time Warner Cable ended Friday, according to two people aware of the resolution who were not authorized to speak publicly. 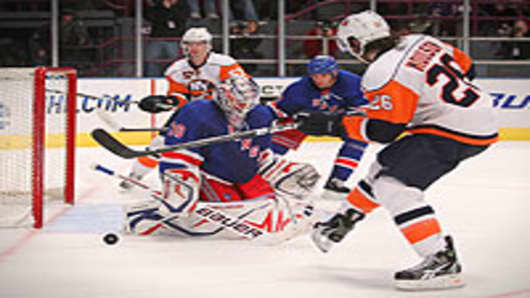 The end of the impasse will be announced Friday afternoon by Gov. Andrew M. Cuomo and executives of both companies.

A settlement had been urged by Eric T. Schneiderman, the state’s attorney general, who was working with both sides.

"We are pleased that both parties have reached an agreement that will finally allow Knicks, Rangers and Sabres fans to enjoy the rest of this season's games," he said in a statement.

The governor’s intervention in the past 24 hours with James L. Dolan, executive chairman of Madison Square Garden , and Glenn Britt, chief executive of Time Warner Cable , accelerated the agreement.

The blackout deprived many Knicks basketball fans around the state of seeing much of the rapid rise to stardom of point guard Jeremy Lin— as well as the continued success of the New York Rangers hockey team, both owned by MSG.

The impasse began Jan. 1 with the companies disagreeing over what Time Warner Cable would pay to continue carrying MSG . Time Warner Cable, which serves more than two million customers, insisted that MSG reneged on a proposal for a 6.5 percent increase late last year and then demanded a 54 percent hike. MSG has never discussed figures publicly but said Time Warner’s were not accurate.