If you're looking for a market that is up almost three times the Dow in 2012, look to Brazil.

Brazil's Bovespa has advanced some 17 percent this year, after slumping 17 percent in 2011. 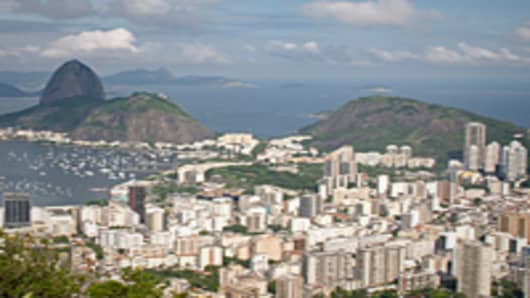 "Latin America was held back by Europe, and as the LTRO [ECB lending] program took the pressure off funding needs in Europe, Brazil was a beneficiary," says Will Landers, who manages more than $6 billion in BlackRock's Latin American funds.

A better overall global economic environment—renewed optimism in Europe and the U.S.—and lower rates in Brazil are helping its markets. And it's not just Brazilian stocks investors are chasing, but also fixed income. Some $18.6 billion moved into Brazilian corporate and sovereign debt in the first six weeks of 2012, says Flavia Cattan-Naslausky, an analyst at RBS who specializes in Latin America.

“There's been a shift to risk sentiment,” she says. “Liquidity is out there and needs to be put to work to regions that have high economic growth and are providing attractive yields.”

Brazilian-denominated bonds, for instance, offer more than 10 percent annualized yield within a 2-3 year period, while the U.S. 5-Year yields less than 1 percent.

So how can you tap Brazilian markets?

"If you're a retail investor you want to have someone with institutional and specialist knowledge investing on your behalf," says Lupin Rahman, executive vice president of PIMCO’s emerging markets portfolio management team.

While U.S. Treasuries are largely viewed as "safe," Brazilian bonds come with a trio of risks linked to the country's credit, rates and currency—though due to Brazil's strong balance sheets and growth, it remains favorable to investors, she says.

"We continue to be relatively positive on the whole Brazil story," she says. "Out of most of the emerging markets out there, Brazil is positioned to outperform in the current global environment."

Still, investors who are worried about Brazil's currency may opt for emerging-market bond funds denominated in U.S. dollars, she went on to say.

Meanwhile more sophisticated investors may work directly with a Brazilian broker to play a broader range of equities or a local trend:

"There's still a huge housing deficit in Brazil," says Landers. "With wages going up and interest rates coming down, housing should do well— [PDG Realty] is our favorite."

Still, some market pros warn that Brazil's 2012 surge won't last—and that it reflects a tendency for funds which underperform one year to win back interest—albeit fleeting—early the following year.

"Last year, Russia went off like gangbusters in the beginning of the year after having a dull 2010," says Cameron Brandt, of EPFR Global, which tracks 38,000 funds worldwide. "It didn’t hold up."