No Aggressive Easing by China, Inflation Still a Threat 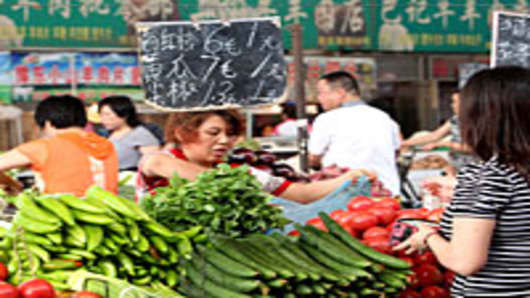 Kelvin Lau, Senior Economist, Global Research at Standard Chartered Bank, tells CNBC there are two major reasons why Chinese authorities will continue to take a cautious, rather than bold, approach to monetary easing.

“Any massive loosening of monetary policy could add upward pressure on property prices, which are still not fully deflated,” Lau said on Friday.

He adds that the government also needs to boost wages and improve living standards. “So long as there’s some wage inflation… that will continue to feed through to (overall) inflation.”

According to a StanChart survey conducted after the Chinese New Year, wages in China’s densely urbanized Pearl River Delta region are expected to rise on average 10 percent in 2012.

“What we are seeing is that income levels are growing in China, maybe not 20-30 percent this year, but more like in the teens,” Xue said.

While economic data out on Friday point to cooling — inflation slowed sharply to 3.2 percent, below market expectations of 3.4 percent and retail sales over January-February rose 14.7 percent against a forecast of 17.5 percent — Alistair Thornton, China Economist at consulting firm IHS Global Insight, says there are still inflationtriggering factors like high oil prices.

“Price gains are not totally off the radar, given structural pressure from demographic shifts and high international commodity prices,” Thornton said in a note after China’s CPI data was released.

The Chinese government has to maintain a “tricky balance” between growth and inflation going forward, he added.

“The government craves the growth effects of further monetary easing, but does not want to stomach the inflationary implications,” he said.