Richard Watts|Author, "Fables of Fortune: What Rich People Have That You Don't Want"
Published 11:15 AM ET Wed, 21 March 2012 CNBC.com

GUEST AUTHOR BLOG "Where is the American Dream Today?" by Richard Watts, author of "Fables of Fortune: What Rich People Have That You Don't Want." 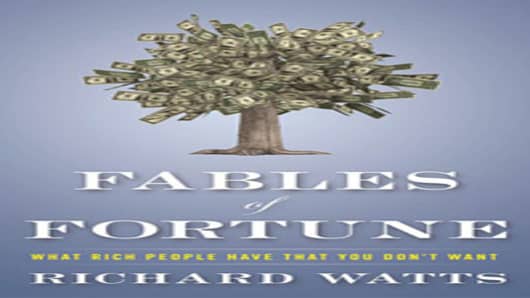 At the age of fourteen, Quirino “Jerry” Moretti completed the last leg of his seventeen day trip traveling from Italy to New York and on to Los Angeles by train in 1950.

Jerry spoke no English, but carried a hand written note announcing his parent’s intention for him to immigrate to the United States and begin a new life in California. A member of his distant family, Aunt Amelia, would provide him food and a place to live.

The wooden framed picture of his family on the farm in Potenza, Italy would be the only memory of his family during the teenager’s next ten years. Mama and Papa Moretti hoped to give Jerry the freedom to grow beyond the small farm in Italy his family had worked for generations.

Jerry had known three things on the farm; hard work, meals with laughter, and respect for his parents.

His script for success was still hard work, meals with laughter, and respect for his parents, but Jerry forged a fourth ingredient; sacrifice. He took sack lunches to work his entire life. His wife Barbara raised their three boys on a strict budget. They lived in a two bedroom house long after they could afford a bigger one. They drove one used car. Their children went to public schools. He purchased things only when he could pay cash. Credit, he remembered vividly, nearly took the family farm in Italy. He took no money from his investments until the mortgage was paid in full.

Today, at the age of seventy-six, Jerry and Barbara still live in the small home in Whittier, California he bought forty-four years ago. Yes, they have a cottage on a nearby lake, and a cabin in the local mountains, but both are modest and speak little of material success. Their children are grown, have families, and are financially independent.

“So,” you might ask, “What good is his money?” “He could have had anything he wanted!” “He missed out on so many things money could buy!” It would only take meeting him once, as this slight silver haired man puts his hand gently on your shoulder, smiling with a tear of joy and speaking in an Italian accent, “But I did get everything I wanted . . . I got the American dream; the freedom to choose my passion and work toward it my whole life.”

"Perhaps the keystone is who is determining what you really want? . . . Is it your parents, your boss, magazines, reality shows, or the lure that more is better?”" -Author, "Fables of Fortune", Richard Watts

The American dream is the story about a journey toward prosperity, which has morphed into a story about reaching a destination.

The dream was about having the freedom to choose, as opposed to having others choose for you. We in the United States are participants in a culture where it is suggested that success and happiness result from having things. We are bombarded with symbolism, which conveys that the one who hits the financial jackpot gets the dream and can have everything he or she wants.

Perhaps the keystone is who is determining what you really want? . . . Is it your parents, your boss, magazines, reality shows, or the lure that more is better? The question you might answer is, “If money was no object, what would I do with the rest of my life?” You might discover the richest person is not who has the most, but the one who needs the least.

The American dream is still attainable but it starts with your dream and realization the journey may be more fulfilling than the arrival.

Richard Watts, the founder and President of Family Business Office ® (“FBO”), was admitted to the California State Bar to practice law in 1982 and is an alumnus of the Harvard Business School with an undergraduate degree from UC San Diego School of Economics. FBO is a legal and consulting firm that manages the country’s wealthiest families and their family office enterprises. Richard’s families rely on him to oversee family operations and make decisions with them on a daily basis. Richard's new book, "Fables of Fortune: What Rich People Have That You Don't Want."