Greece’s Tsipras: We Want Euro, but Not Austerity

The head of Greece's Radical Left Coalition, Alexis Tsipras, told CNBC Thursday that he will “go as far as I can” to keep Greece in the euro zone, despite declaring earlier this week that the Greek bailout agreement is “null and void” and should be abandoned. 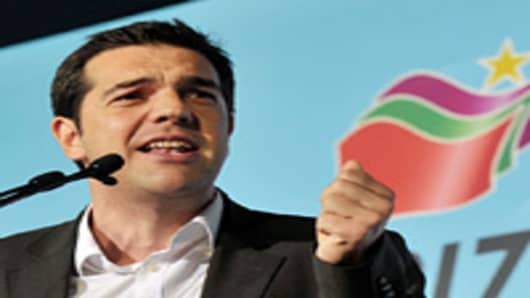 Tsipras (pronounced SEE-Pras), who was unable to form a coalition government this week after his party came second in Sunday's election, said a Greek exit from the euro zone would be “disastrous.”

Tsipras said he is willing to negotiate with the so-called troika — the International Monetary Fund, the European Union, and the European Central Bank — to keep Greece in the euro zone.

But his opposition to the austerity measures — known in Greece as “the memorandum” — that are required for Greece to get further bailout money puts him in direct conflict with the troika.

“I fully disagree with what is at heart of the memorandum,” Tsipras said, adding that “further austerity will make us a third world country in the EU.”

Tsipras's views are significant because a new poll on Thursday put him in first place to win snap elections if they are held in June. The elections may be necessary if none of the winners of Sunday's elections are able to form a government so far.

In a letter Thursday sent to top European officials, Tsipras urged them to re-examine the country’s strict austerity program.

His argument stresses that the strong anti-austerity vote in Sunday’s election, which produced a hung parliament, stripped Greece’s bailout commitments of “political legitimacy.”

Tsipras says the punishing cutbacks have failed to address the country’s problems, are destroying the recession-bound economy and threatening to create a Greek “humanitarian crisis.”

He urged top EU officials to “re-examine the entire framework of the current strategy.”

—Reported by Michelle Caruso-Cabrera and written by Jennifer Parker. The Associated Press also contributed to this report.