The stock market appears to be at a critical inflection point. That’s the takeaway from widely followed economist Marc Faber, author of the Boom, Gloom & Doom newsletter. 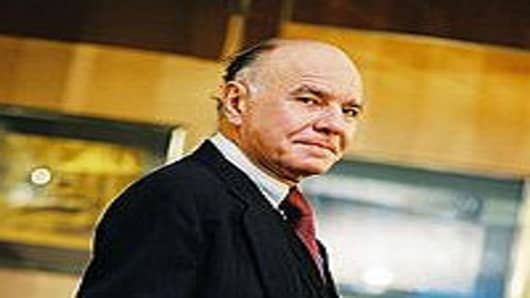 Faber’s bearish market calls have been followed closely since 1987 when he warned his clients to cash out before Black Monday.

And in a live interview on CNBC’s Fast Money Halftime Report, Faber again warned that economies of the world may be on the brink of a serious slowdown.

Faber indicated that while investors remain focused on Greece and Europe – other issues, bigger issues are looming. And they’re more threatening.

“As an observer of markets – whenever everyone focuses on one thing – like Greece and Europe – maybe they miss issues that are far more important – such as a meaningful slowdown in India and China.”

The latest reports from Beijing would support Faber's assertion. The HSBC Flash Purchasing Managers Index, slipped to 48.7 in May from 49.3 in April. That marks the seventh straight month that the index has been below 50, a level which indicates economic activity is contracting.

“There are more and more stocks that are breaking down – economic sensitive stocks and companies that cater to the high-end,” he said. "That suggests to me the economy is likely to weaken and the huge asset run is likely to come to an end with significant asset deflation.”

Earlier in the week Tiffany lowered forecasts citing slower sales. At that time, Fast Money trader Dan Nathan warned that results such as these were foreboding and suggested the high-end was starting to crack.

When taken in concert, Faber says all the economies of the world could take a hit from these negative developments.

However, in the near term Faber also sees potential for a market rally.

Faber said the bullish catalyst would be Greece exiting the EU.

“I think the market would be relieved if finally Greece exited the euro. There would be some clarity. Although it wouldn’t be good for banks and insurance (stocks) in general I think markets are oversold and with an exit – markets would rally.”

It’s worth noting that Faber is talking hypothetically; he does not think Greece exits the EU in the near future.

“What I think will happen is that Germany will show more flexibility and issue more euro bonds.”

Faber pointed to the recent decline in the euro as evidence that the currency markets share his view. “More bonds will challenge the quality of the euro. That’s why the euro has been very weak, lately."

For investors looking to navigate what could be a serious economic storm, Faber said the best thing to do is keep the portfolio in US dollars and own gold, “knowing that sentiment is negative and in the near-term it could trade down to the Dec 29 low of $1522.”

For Jens Nordvig
Nothing to Disclose