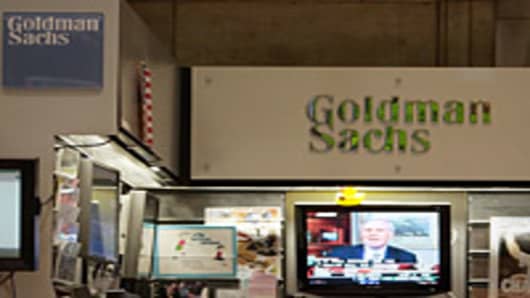 Wall Street has good reason to be rattled by the news that Goldman Sachslaid off senior personnel , including managing directors, last week. It is likely the beginning of a new kind of deleveraging that will occur at every major Wall Street firm.

It’s well known that Wall Street has been forced by markets and regulators to delever in the wake of the financial crisis. For the most part, this has been a matter of financial deleveraging: reducing debt to capital ratios, reducing dependence on short-term debt, reducing compensation (especially bonuses) to revenue ratios.

But many Wall Street firms, especially Goldman Sachs , have engaged in another form of leverage that has persisted through the crisis but now seems ready to crack. Despite being public companies seemingly dedicated to capitalism, many Wall Street firms remain as high-income workers collectives. Regardless of the legal ownership structure, they are compensation machines for their employees.

Most of the people in these roles are extremely intelligent and hard-working. In good times, they can boost a firm’s earnings into the stratosphere. The upper ranks may win the new business, have the client relationships, or construct the trading strategies. But when client business is running hot, the execution of the deals depends on the MDs and VPs.

When business runs cold, however, these upper-middle-ranks are costly.

They have high fixed costs but do not produce much stand-alone income for the firm. Senior managing directors in hard times tend to hoard business for themselves—with the perfectly good reason that there is less work to do, so more time for senior people to be more hands-on.

Wall Street firms describe their people as “human capital.” But in many ways, they are more like “human debt.” They enable a firm to perform better than the actual capital—the senior MDs and partners—would alone. The return on “equity”—that is, the profits going to senior executives—is greater because the MDs and VPs don’t receive as great a share of the profits. But when profits are low, they drain income from senior executives.

Reduced compensation at all levels exacerbated this problem. With senior executives receiving lower levels of compensation than they did before the crisis, there is a tendency to stay on longer. This means there are fewer opportunities for the middle ranks to move up—and thus fewer incentives for them to become profit-centers rather than cost-centers.

Another change in compensation—the move away from annual bonuses and toward higher fixed salaries—has made this problem even more acute.

It is now much harder to reduce the compensation costs of the upper-middle ranks of an investment bank based on a firm’s annual performance. Gone are the days when all a firm had to do was slash bonuses in a tough year. Salaries have become much more akin to debt service.

Finally, a third compensation switch may also be a contributor toward this trend. Firms have been compensating employees with larger levels of equity instead of cash. Many firms, however, believe that their shares are currently underpriced. Awards and options granted now will be costly if prices rise in the future. What’s more, in order to avoid diluting existing shareholders, firms may need to buy back stock when equity compensation grants vest. Paying middle-ranked executives with costly equity may simply be a price too dear for some firms.

So when firms start letting managing directors and vice-presidents go, it is a form of deleveraging. They are reducing their exposure to the high-fixed costs of middle-ranks. But they are also likely reducing their ability to outperform in good years. As with financial deleveraging, personnel deleveraging has both benefits and costs for the returns that firms will be able to make.

It’s very possible that personnel deleveraging could be a long-term cost to firms. It likely exacerbates the desire for middle-ranked executives to be “short-term greedy.” In order to preserve their jobs, they will feel pressure to increase their daily, weekly and quarterly profits. Collaboration may decline and hoarding of business, strategies and client contacts increase.

On the other hand, this could be a temporary phenomenon. Goldman executive Gary Cohn recently said that this year’s class of summer associates at Goldman was so large that it had to be split into two—one group starting last week, the other this week. Perhaps firms are trying to time the market: letting go of the middle-ranks now, while beefing up on the most junior employees who will be ready to play the role of human leverage when business picks up in the future.

FollowJohn on Twitter . (Market and financial news, adventures in New York City, plus whatever is on his mind.) You can email him at john.carney@nbcuni.com .

We're on Google Plus too! Click here for John's Google+ page .