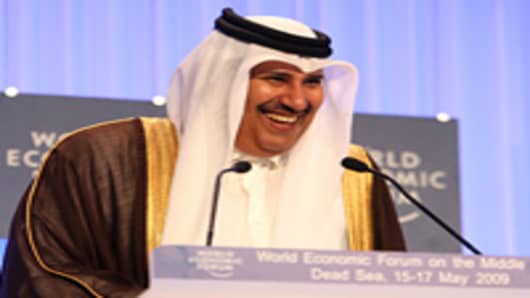 New Yorkers have known since May the purchase price of most expensive condominium ever sold in the city: at least $90 million for the penthouse at One57, the tower going up across the street from Carnegie Hall.

But since the sale was announced, speculation has been whirling about the identity of the buyer.

As time went on, some observers had begun questioning whether the building's developers, Extell, had jumped the gun on their announcement to gin up interest in sales of lesser apartments in the building.

Now it's been reported that the prime minister of Qatar, Sheik Hamad bin Jassim bin Jaber Al Thani, plunked down the money. The purchase price is at least $2 million morethan the previous New York record price of $88 million, paid by a Russian oligarch for his daughter's pad at 15 Central Park West.

The sheik has been shopping co-ops in New York for some months, without persuading any building's board to welcome him and his entourage of two wives and 15 children. Most recently, he was rejected in his attempt to buy, for $31.5 million, two Fifth Avenue apartments belonging to Huguette Clark, the reclusive heiress who died last year.

Making Sheik Hamad a harder sell is his diplomatic immunity: If he were to miss payments on his co-op fees, forcing him to make good would be near impossible. The stopper for his prospective neighbors on Fifth Avenue seemed to be that he was planning to consolidate two adjoining apartments, giving him several votes on the board.

If so, the owners at One57 aren't finished benefiting from the sheik's frustration. Reports on Monday say that Sheik Hamad is in talks to buy four other floor-through apartments in One57, driving his total expenditure in the building to $250 million.

The brother of the founder of modern Qatar, the sheik has been prime minister of the oil-rich nation since 2007. He has significant real-estate investments in London and is owner of the world's eighth-largest yacht, the 133-foot Al Mirqab.