The euro zone should have started off with fewer members, and struggling members should be pushed out, a former European Central Bank (ECB - click here for an explanation) member who helped shape the euro at its inception told CNBC. 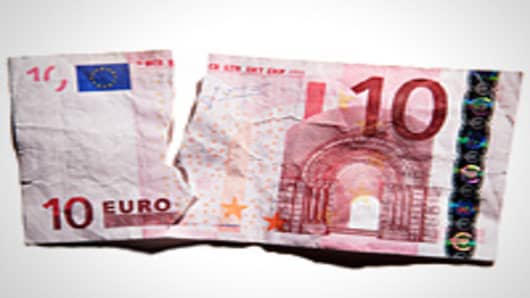 Otmar Issing, the respected German economist and former member of the Bundesbank, said: “We should have started with a smaller number, no doubt about that, with stricter rules. But this is spilled milk. Now we have this composition, and the idea that we should have a policy that no country ever should leave is something which is an invitation to blackmail.”

“A break up of the euro area would be a major disaster – no doubt about that. But the alternative to that, being a monetary union in which the reputation of the ECB would be undermined, or even destroyed. The euro would tumble and governments would pile up debts without any limit. I think this is a scenario – a horror scenario – which comes close to the disaster of a break up.”

His comments follow Eurogroup President Jean-Claude Juncker’s comments earlier this week that a Greek exit from the euro zone could be “manageable.”

Issing also believes that over-reliance on the ECB to bail out the euro zone is “very dangerous” and said the ECB should avoid a scenario where it has to save the single currency area.

Through actions like liquidity injections and long-term refinancing operations the ECB has helped reduce market panic about the fate of the euro zone – but is now coming under increasing pressure to provide more assistance, possibly as lender of last resort to troubled countries.

Issing’s sentiments that the euro should be saved, but not at the cost of the ECB undermining its own financial stability by continuing to bail out weaker countries, are shared by many of his countrymen. But Germany has increasingly become isolated as the euro zone’s most prosperous member, as it has refused to listen to calls to create jointly-issued euro zone bonds to solve the region’s debt crisis.

As chief economist of the ECB between 1999-2006, Issing helped develop the euro in its early stages. He maintained that the euro is still a “safe currency” despite the recent turmoil and speculation that one or more of its member states will have to leave. 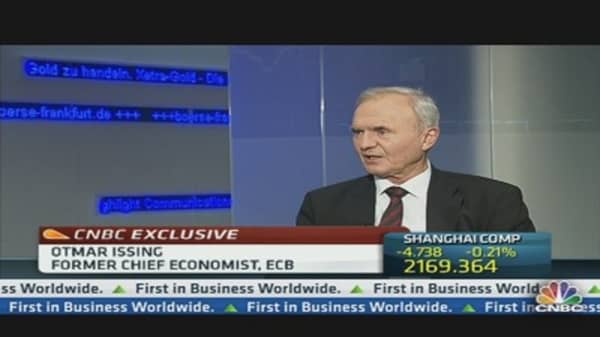 “The euro itself does not need to be saved. What has to be saved is the stability of the euro and the euro area. The question – how many countries can participate, this is the challenge with which Europe is confronted,” Issing said.

Greece, struggling under the weight of austerity imposed as part of a bailout by the troika of the ECB, the International Monetary Fund and European Commission, is the country most often mentioned as the first to leave the single currency.

Some have argued that it should never have been allowed to join because of its relatively weak finances compared to powerhouses like Germany.

Worryingly for current euro zone policymakers, Issing said that a number of key measures proposed to solve the crisis, such as jointly issuedEurobonds and closer European banking supervision, would not “really help” the current situation.

In recent months, markets have moved up and down based on the slightest signal from euro zone policymakers that they would take stronger measures to ease the region’s debt crisis.

Politicians who blame German Chancellor Angela Merkel for creating turmoil in the markets by not taking further action on issues like Eurobonds should “shut up,” Issing said.

“They (politicians) always give the impression that they have the right medicine, which is more money, and markets will always ask for more. So this will be an endless game and politics will always be seen as prisoners of this process. It should be reversed. Politics should say what will not happen. This total mutualisation of debt – this is something which must not happen,” Issing added.

He added that weaker banks in the euro zone should be allowed to fail. Several European governments, such as the U.K. and the Netherlands, have been forced to bailout banks, increasing sovereign debt burdens.

“The medicine still has to be solving problems where they were caused, in the banking industry, restructuring banks, and also cleaning the mess in banks. This can for some time be kept through the crisis for some time through measures from outside, but in the end, Europe is overbanked and weak banks have to disappear,” Issing said.