Michael Lewis, acclaimed author of "Boomerang," "The Big Short," "Moneyball" and "The Blind Side," was given exclusive access for six months with President Barack Obama. Lewis wrote an in-depth profile on the president for Vanity Fair's October issue. 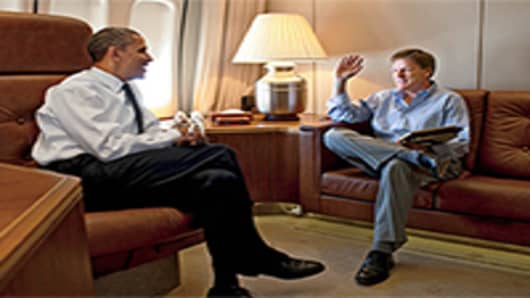 He discussed his experience on CNBC's "Power Lunch" Tuesday and at length off-air.

CNBC: How did you nab the most exclusive interview ever given by a sitting president? (Read More:Obama - Our Problems Can Be Solved.)

Lewis: I sent an email to Jay Carney [White House press secretary] saying someone should write an old school journalist style [profile], like Harry Truman’s profile in the New Yorker way back when. Carney rang me back and said, “He wants to make it happen.” I went. “Who’s ‘HE'?” — Carney is like, um, HE is the president. Come in, we’ll have you talk to our staff and see ... how we can do it. 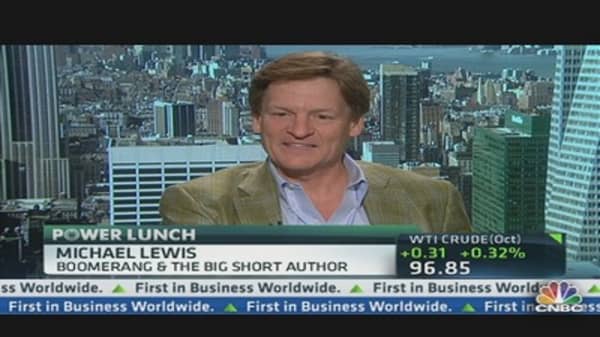 So I go through and meet every single member of the staff, in an process more rigorous than a Goldman Sachs interview rounds. … I mean I met with everyone ... and finally, one day, never even knowing if it would happen or not, I get called into the Oval Office, and boom, I am talking to Obama for one full hour, about an email he received from an irate parent at his daughters' school, about coaching soccer games, and then we’re talking "Moneyball," the movie, for a long time, and "Boomerang" and "The Big Short" and the financial crisis and I realized shortly into the conversation, “I don’t have to really sell myself, I‘m in, I got it."

But later on, his White House staff really said to me, we personally don’t think there’s any upside to having you embedded for months, but he [President Obama] … wants it, so there you go.

And the staff pretty much treated me as someone tolerated, but I really think Obama himself was kind of amused to have me around to talk to when he had a free moment.

For six months, I got a Secret Service pin on my lapel that identified me as a member of the staff, and could stand right next to him. I traveled with them everywhere — Cartagena, Colombia, you name it — and anytime there was a free 30 minutes, Obama came and grabbed me to talk. 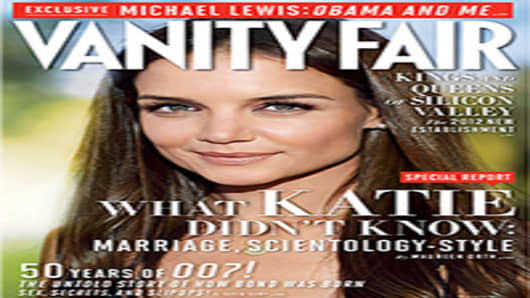 Lewis: I would call it “a long game.” Obama is tactical and sees ahead a few steps and tries to look down the horizon and not take "stupid shots" — his team tends to win because they are less risky. He is almost “sniper-like” in his decisions on the court and very, very, very competitive. Wow. He’s 51, and he‘s not young, but he has got game and desire to "win.”

Lewis: I asked him, I said, we’re the same age, the same background, we went to Ivy Leagues and during our generation, ’81, ’82, Wall Street firms were recruiting on campus heavily and that’s where our peers were going, and you didn’t, why not? He said, “That was not my end game. It was not my calling. I was never going to be “the money guy.”

Michael Lewis: It’s huge, it has new car smell, a nuclear bomb could drop on it and you would still feel safe, and you and the cockroaches would come crawling out. The shelf next to the president’s seat has a place for him to recharge his Blackberry, and a recharger for his iPad in the middle next to a big hulking phone ... and he liked to prank me. 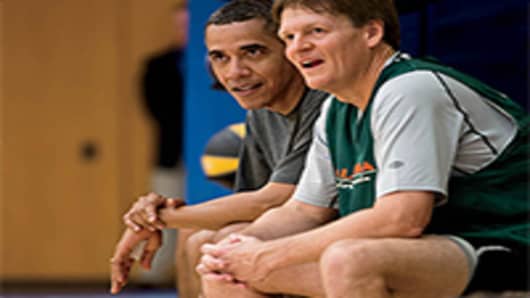 The first time in the Beast, I was so excited I wrote furiously on my notepad taking in all the details — he saw me ignoring him — as I put my hand on the phone with the presidential seal, he yells out, "don't touch that!" I freaked and froze, and was mortified thinking I’d set off a bomb, and he turns and laughs at me so hard, “I got you!”

CNBC: So he’s a prankster?

Lewis: Yes, and I argue that he is not cold or aloof, that he actually laughs all the time — more than me. He loves jokes, and he is an optimist ... so, so, so self-confident.

He really believes he can return to normal, that he can go back and do everyday things given the chance. And I told the president, "No you can’t, you can’t go back and do stuff the way," and while I never ever saw him lose his temper ever, I did see him get annoyed, and that was only when I pushed him and said, "No, Mr. President you are fooling yourself, how can you possibly keep it real after being president?" He looked at me and said, "No Michael, you’re wrong, I can."

"If I had a day off, I would go body surfing in Hawaii and then I would take Sasha and Malia to New York City one day and go to the Museum of Modern Art and look at the paintings and people watch and make funny faces.” Obama really thinks he can do that.

Lewis: The president is a two-thumb texter Blackberry user. But he also loves his iPad . In fact the whole White House staff uses Blackberries. I grabbed Carney’s Blackberry and he had 13,500 plus unread messages — in just the past few days — all White House emails go through him. So, I don’t know what’s on Obama’s Blackberry — the same amount or not.

CNBC: What about Obama’s odd relationship to the news.

Lewis: President Obama explained that "one thing you realize fairly quickly in this job is that there is a character people see out there called Barack Obama. That’s not you. Whether it is good or bad, it is not you. I learned that on the campaign. You have to filter stuff, but you can’t filter it so much you live in this fantasyland.” (Read More:Your Money Your Vote.)

CNBC: Obama on making decision on the Oval Office.

Lewis: The president pointed out that nothing comes to his desk "that is perfectly solvable.” Any given decision you make you’ll wind up with a 30 to 40 percent chance that it isn’t going to work. You have to own that and feel comfortable with the way you made the decision.

For instance, when the financial crisis was on hand. (Read More:Inside America's Economic Crisis.)

But then, walking in the president’s shoes at the time, you realize how he came to the decision of 30, 40, 50 percent probabilities and how that American public reaction would have been — to do that action in a time of crisis. So it didn't happen and that is how decisions, every day, are made in the Oval Office.

You also realize how hamstrung the president is because of Congress right now and in the most stifling way of not getting anything done, so why run, or why run again if you can’t get things done like you wanted to. (Read More:Returning US Congress Faces a Crush of Big Tasks.)