How the White House Is Keeping a Lid on Oil Prices

The White House promise that it could release oil from strategic reserves if prices get too high is keeping a lid on crude prices, already under pressure from slower global growth. 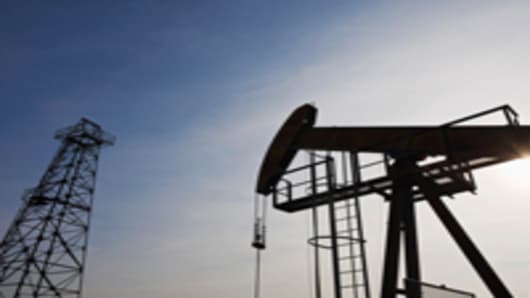 In what appears to be a calculated move to keep oil prices under control, the White House Tuesday reiterated its comment that “all options are on the table” when it comes to the oil market, including a Strategic Petroleum Reserve release.

U.S. oil prices were trading just under $96 Tuesday afternoon, and Brent crude , the international benchmark, was down about a percent, just below $113 per barrel. (Read More: Get Oil and Natural Gas Prices Here)

Oil was already trading lower, ahead of the Tuesday comment, in follow through to Monday’s sharp and sudden drop in crude futures.

Just before 2 p.m. Monday, West Texas Intermediate crude futures plunged from above $98 to 94.83 per barrel, with little in the way of explanation. Traders pointed to rumors about a pending SPR release, and the volatility from the expiration of options, as well as a “fat finger” trade.

But none of those explained the rebalancing in oil that rippled across other markets, and appears to have started in the bond market. And the CME Group issued a statement saying it is "unaware of any technical issues" regarding the crude price drop.

WTI had risen above $100 for the first time since May last week after the Fed announced its latest round of quantitative easing. In this program, the Fed is buying mortgage-backed securities.

The market was betting last week that the new QE3, like past programs, would fuel a risk rallyand send commodities, and inflation, higher. (Read More: Fed’s ‘QE-Infinity’ Will Push Gold Up to $2,400—Pro)

But some of those expectations appear to have been pared back. The Fed news also coincided with an outbreak last week of unrest in the Middle Eastwhich was also supportive of prices.

David Lutz of Stifel Nicholas said he believes the sell-off in oil and other commodities Monday was preceded by a big inflation bet taken off the table.

"The way that all commodities sold off lead us to believe it was something else, not a fat finger or talk of an SPR release. Plus, the tremendous amount of options that expired today in oil exacerbated the move especially in crude," he told CNBC.

The "5-year breakeven" inflation index—the difference between treasuries and TIPS—is an indicator of bond market expectations of inflation over the next five years. He said the chart shows the big sell-off in oil was preceded by a big move in the Treasury markets.

“It really feels like the entire moves this week were the reversal of an oversold Treasury market and overbought commodities markets,” said Ian Lyngen, senior Treasury strategist at CRT Capital. “Friday’s moves were very sharp in most markets, and I think that after the weekend, cooler heads have prevailed and we’ve seen Treasury yields move lower and consolidate back below the 200-day moving average in 10-years, and as that happened, the market has read that the long-term inflation risk create by the Fed’s mortgage-backed bond program are real but not as dramatic as feared last week.”

The 200-day—1.84 percent—on the 10-year was tested again Tuesday, and yields were well below that levelin afternoon trading.

However, Dennis Gartman, of the “Gartman Letter,” thinks the biggest mover of oil was the SPR talk which was followed by a White House comment that the SPR options “remain on the table.”

“We think it is not only on the table but is moving to the very center of the table and is being debated at the highest levels within the White House,” he wrote. “We need to remember that the SPR is wholly topped up at this point and under the IEA’s rules for strategic reserves, the SPR is indeed far beyond what is required.”

The SPR is required to have 90 days of demand on hand. That will be key, Gartman noted, as he also pointed out that demand in the U.S. is falling due to more efficient cars and other factors. At the same time, sluggish global growth is keeping world-wide demand at lower levels.

Gene McGillian, an analyst with Tradition Energy, said he had expected to see the sell-off in oil even before Monday afternoon’s downdraft. “I think the market was pushed to a four-month high on that stimulus news. I was a little surprised the market hadn’t turned and shaken out the new longs because they announced the measures and we all knew what was going to happen,” said McGillian.

Options expirations Monday may also have added to the volatility. “Because $95 puts were going off the board, I think the overall market was due for a washout. In 2-1/2 months, we rallied more than $25 and we haven’t seen much reversal or profit-taking,” he said.

“I think the market is going to be firm here between $90 and $100,” said McGillian. “I think what we have to keep in mind is that in today’s trading environment and the speed at which information moves, the market is more vulnerable to these lightning whipsaws.”

John Kilduff of Again Capital said Monday’s trading did have the appearance of a macro trade, but it also felt like a “flash crash” in the oil market.

“It appeared to be a technical failure and a blowoff top that triggered this,” he said, adding that oil was not even at its high when the big slide happened. “It was at $99 and change…that’s why this idea that it was a macro portfolio rebalancing trade does hold some water.”

He said the fall through the 13-day moving average Monday—$96.72—accelerated the move.