Kathleen McNeill isn't fighting your typical traffic ticket because it wasn't written by a police officer.

An unmanned camera at a traffic intersection in Queens, N.Y. discreetly snapped an image of her car during a funeral procession—without her knowledge. A couple of weeks later, she received a surprise $50 ticket in the mail.

The 51-year old auxiliary police sergeant from Rutherford, N.J. wasn't even driving. She was a passenger and part of a funeral procession.

"'We don't stop at the red lights,' said the funeral people. It is New York State law that the funeral procession travels as one single car. So, we went along with it, " McNeill said.

The red-light camera that snapped unsuspecting McNeill was installed by American Traffic Solutions, a road safety camera installer based in Scottsdale, Ariz. Founded in 1987 with three employees, the business has grown to more than 800 employees. The company has more than 3,000 installed red-light and speed-safety cameras in operation.

While the cameras are intended to enforce traffic safety, it's no secret local governments are also looking to reduce operating costs with the cameras, said James Tuton, co-founder and chief executive of American Traffic Solutions.

The cameras and subsequent traffic tickets help reduce violations. "Ninety percent of all people who get tickets don’t get another one. People don't run red lights when they know there is a red-light camera," Tuton said. The new technology also pulls in revenue from traffic fines—without having to pay for an officer's salary or benefits.

"Crashes and clean-ups are a big cost and a burden on the government. It is the perfect time for us to grow and prevent crashes, which are preventable," Tuton said.

Each camera costs roughly $5,000 to lease depending on camera features, he said. 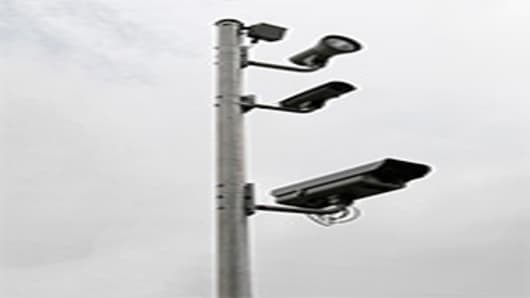 The Automobile Association of America says it supports the use of automated enforcement as part of a comprehensive traffic safety strategy.

“Unfortunately, we see some jurisdictions turn to automated enforcement with budgets and revenue in mind more than safety,” said AAA State Relations Director Justin McNaull in a statement to CNBC.com. “Successful programs must have adequate safeguards for motorists in place to ensure due process and fairness are respected and that safety is improved.”

Others are more skeptical of automated enforcement including cameras.

"This is one of the biggest scams being perpetrated on the public ever," says Jay Beeber, executive director of Safer Streets L.A., a non-partisan advocacy group that lobbies against red-light cameras in California.

But the odds of beating the ticket are against her. Just three percent of drivers contest a violation, according to New York City Department of Transportation spokesperson Nicholas Mosquera. Of those violations, 97 percent are upheld.

Mo matter the outcome, McNeill of New Jersey may have gotten off easy with her $50. Some penalties from red-light cameras can cost several hundred dollars.

And many drivers, who've been captured by a red-light camera, don't know they've violated a traffic rule—until they get a ticket in the mail.