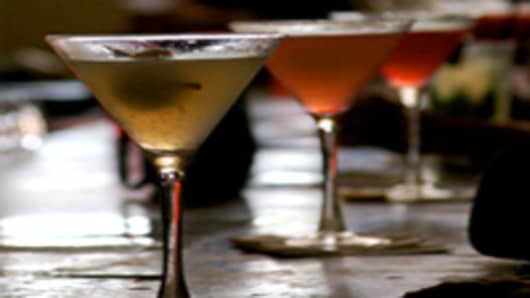 Do you ever lie awake at night, unsettled by fears that the Western world is collapsing, all while Asia's elites grow increasingly rich and hold decadent parties that you'll never be invited to?

You may be on to something. Introducing the "Jewel of Pangaea," a cocktail sold in Singapore for $26,000. That is roughly the per-capita GDP of Greece in a glass.

The Jewel of Pangaea is not slid across a counter by some sweaty barkeep. It is prepared by a man in white gloves who retrieves fancy bottles out of a steel suitcase and the drink is defended at all times by five intimidating bodyguards.

"The jewel of Pangea is not just a drink," says Sabrina Van Cleef Ault, owner of Pangaea, the exclusive club that serves the Jewel of Pangaea. "It's the spirit of Pangea in a glass. Are you ready?"

This is a rhetorical question. You're not ready.

Yes, diamonds are a garnish. But if you could afford to throw down the equivalent of a 2012 Toyota Prius on a mild buzz, you would have already known that.