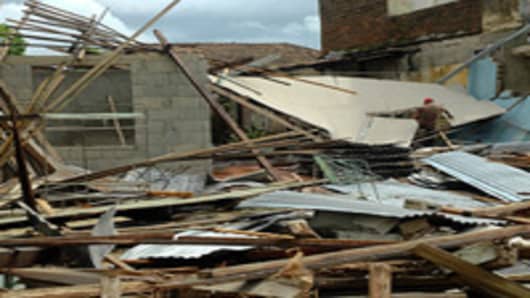 Hurricane Sandy raged through the Bahamas early Friday after leaving 29 people dead across the Caribbean, following a path that could see it blend with a winter storm to hit the U.S. East Coast with a super-storm next week.

U.S. meteorologists expect a natural horror show of high wind, heavy rain, extreme tides and maybe snow to the west beginning early Sunday, peaking with the arrival of Hurricane Sandy on Tuesday and lingering past Halloween on Wednesday.

Experts predict at least $1 billion in damage in the United States.

"It's looking like a very serious storm that could be historic," said Jeff Masters, meteorology director of the forecasting service Weather Underground. "Mother Nature is not saying, 'Trick or treat.' It's just going to give tricks."

Weather trackers say the hardest-hit areas could span anywhere from the coastal Carolinas up to Maine, with New York City and the Boston area potentially in harm's way. 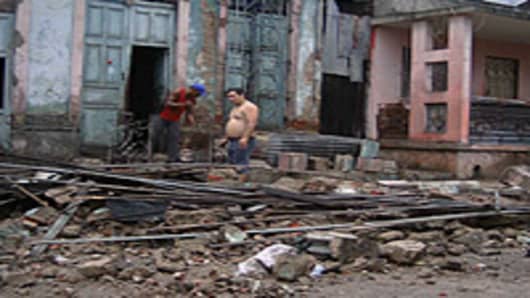 Sandy knocked out power, flooded roads and cut off islands in the storm-hardened Bahamas as it swirled past Cat Island and Eleuthera, but authorities reported no deaths in the scattered archipelago.

"Generally people are realizing it is serious," said Caroline Turnquest, head of the Red Cross in the Bahamas, who said 20 shelters were opened on the main island of New Providence.

Sandy, which weakened to a category 1 hurricane Thursday night, caused havoc in Cuba Thursday, killing 11 people in eastern Santiago and Guantanamo provinces as its howling winds and rain toppled houses and ripped off roofs. Authorities said it was Cuba's deadliest storm since July 2005, when category 5 Hurricane Dennis killed 16 people and caused $2.4 billion in damage.

Sandy also killed one person while battering Jamaica on Wednesday and 16 in Haiti, where heavy rains from the storm's outer bands caused flooding in the impoverished and deforested country. Police in the Bahamas said a 66-year-old man died after falling from his roof in upscale Lyford Cay late Thursday while trying to repair a window shutter.

(Read More: With Giant Storm on the Way, NY Begins to Prep)

On Friday morning, the hurricane's center was about 15 miles (25 kilometers) east of Great Abaco Island in the Bahamas and 480 miles (770 kilometers) south-southeast of Charleston, South Carolina. Sandy was moving northwest at 10 mph (17 kph) with maximum sustained winds near 80 mph (130 kph). 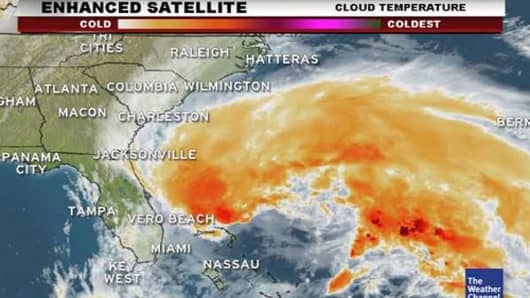 Government officials in the Bahamas said the storm seems to have inflicted the greatest damage on Exuma, where there were reports of downed trees, power lines and damage to homes.

With the storm projected to hit the Atlantic coast early Tuesday, there was a 90 percent chance that most of the U.S. East Coast would get steady gale-force winds, flooding, heavy rain and maybe snow starting Sunday and stretching past Wednesday, U.S. forecaster Jim Cisco said. 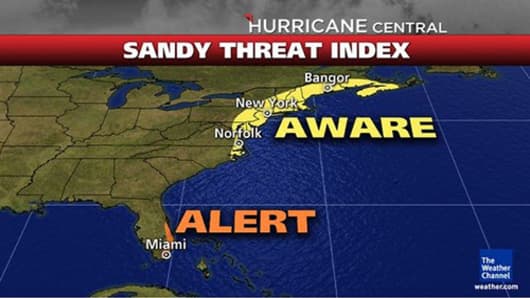 Sandy was expected to remain a hurricane almost until reaching the U.S. shoreline, probably early Tuesday.

In the Bahamas, power was out on Acklins Island and most roads there were flooded, government administrator Berkeley Williams said.

On Ragged Island in the southern Bahamas, the lone school was flooded. 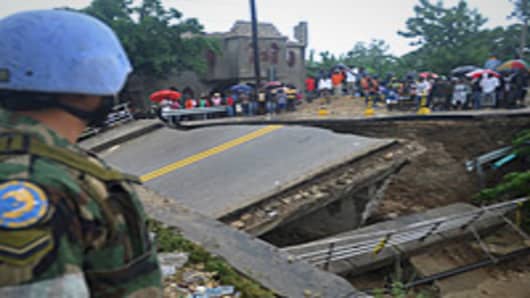 "We have holes in roofs, lost shingles and power lines are down," said Charlene Bain, local Red Cross president. "But nobody lost a life, that's the important thing."

Steven Russell, an emergency management official in Nassau, said docks on the western side of Great Inagua island had been destroyed and the roof of a government building was partially ripped off.

Sooner Halvorson, a 36-year-old hotel owner from Colorado who recently moved to the Bahamas, said she and her husband, Matt, expected to ride out the storm with their two young children, three cats, two dogs and a goat at their Cat Island resort.

"We brought all of our animals inside," she said, though she added that a horse stayed outside. "She's a 40-year-old horse from the island. She's been through tons of hurricanes."

In an announcement at the end of Cuba's Thursday night newscast, Cuban authorities said the island's 11 dead included a 4-month-old boy who was crushed when his home collapsed and an 84-year-old man in Santiago province.

There were no reports of injuries at the U.S. naval base at Guantanamo Bay in Cuba, but there were downed trees and power lines, said Kelly Wirfel, a base spokeswoman. Officials canceled a military tribunal session scheduled for Thursday for the prisoner charged in the 2000 attack on the Navy destroyer USS Cole.

(Read More: No Halloween Trick - The Return of the Perfect Storm?)

In Haiti, Joseph Edgard Celestin, a spokesman for the civil protection office, said the country's death toll stood at 16, including some who died while trying to cross storm-swollen rivers in southwestern Haiti. He did not provide specifics of how other people died.

Officials reported flooding across Haiti, where many of the 370,000 people still displaced by the devastating 2010 earthquake scrambled for shelter. More than 1,000 people were evacuated from 11 quake settlements, according to the International Organization for Migration.

Sandy was blamed for the death of an elderly man in Jamaica.