Does India Have Too Many Billionaires? 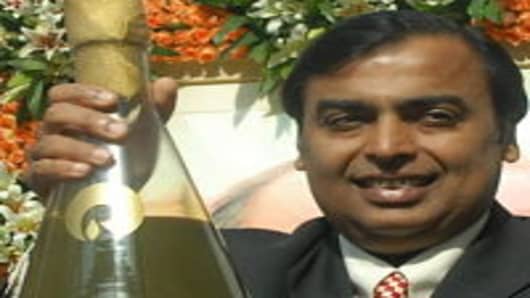 The strength and direction of the Indian economy may be up for debate, but one remarkable fact is not: There has been massive growth in the number and wealth of billionaires in India since the economic liberalization measures in 1991.

The phenomenon has often been compared to the United States' experience in the latter part of the 19th century. This was a period evocatively described by Mark Twain and Charles Dudley Warner as America's "Gilded Age," a time characterized by industrialists so wealthy and powerful that they came to be pejoratively called "robber barons."

By this metric, India's share of billionaires in the global total seems comparable to its overall share of the global economy. But look more closely, and a different picture emerges.

A recent study by the economists Aditi Gandhi, formerly of the Center for Policy Research in New Delhi, and Michael Walton of the Kennedy School of Government at Harvard attempts to parse the sources of the wealth of India's billionaires as well as placing the Indian experience in comparative perspective.

The data reveals a staggering increase in billionaires' wealth as a percentage of national income in India, from a low point of less than 1 percent in 1996 to a whopping 22 percent in 2008.

That number has dropped off as a result of the global financial crisis and plummeting stock markets in India and elsewhere, but as of 2012 it stands at just under 10 percent.

How does this compare to other countries? India is now on par with the United States and Mexico, where billionaires' wealth in both countries is about 10 percent of national income. Among the large emerging economies known as the BRICs, (referring to Brazil, Russia, India and China) India is more unequal than China (where the comparable statistic is below 5 percent) and amazingly even with Brazil (a little above 5 percent), historically a country noted for wide disparities in wealth and income.

Among the BRIC countries, only Russia has a higher share of billionaires to national income (pushing 20 percent) – and that in a country famous for its oligarchs, latter-day robber barons who emerged during the heady days of former President Boris Yeltsin in the 1990s, when Russia held the dubious moniker of being the "Wild East."

The other important finding emerging from Ms. Gandhi and Mr. Walton's research is that 43 percent of India's billionaires came from sectors that the researchers classify as "rent-thick," that is, those enjoying what economists would consider above-normal profits because the companies possess certain privileges.

What is more, these billionaires account for a majority (about 60 percent) of the total wealth of India's billionaires.

The Forbes list of richest Indians, released last week, is full of businessmen and women from "rent-thick" sectors: real estate, construction, infrastructure, media, cement and mining. These are sectors in which the government continues to play a large role, in the form of licenses and other forms of control, and in which there's a presumption of a government-business nexus – or collusion, to use a less flattering term, according to Ms. Gandhi and Mr. Walton.

For example, they contend that "the real estate sector is well known for the large number of 'black' transactions, and the nexus between politicians and realtors has been documented in recent scams."

An obvious inference, although one difficult to prove rigorously, is that the above-normal profits earned in industries like real estate or cement accrue because of the cozy relationship between business and government.

There is some heartening news, though, in the study by Ms. Gandhi and Mr. Walton. According to their analysis, the majority of Indian billionaires are "self-made," and around 40 percent represent wealth that is "inherited and growing," like the Ambani brothers, Mukesh and Anil, sons of the late Dhirubhai Ambani, founder of the family business empire.

Not surprisingly, the self-made billionaires are in fields like information technology, which are offspring of the 1991 economic reform measures, and not holdovers from the era of the "license raj."

It's impossible to establish a conclusive cause-and-effect relationship, but the finding is at least suggestive of the fact that economies populated by those whose wealth is self-made are more dynamic than those that rely on the perpetuation of existing economic elites and their descendants.

As Jayant Sinha, an investment adviser, and Ashutosh Varshney, a political science professor at Brown University, have argued in a column in The Financial Times, the current state of the Indian private sector, which they dub "curry capitalism," requires sweeping reforms, intended to ensure that cronyism and corruption are curbed while India's entrepreneurial ethos is given a much-needed boost.

What is more, even in the United States, there is an increasingly urgent debate on whether worsening income and wealth inequality, as captured by the importance of billionaires to the economy and other factors, is helpful or harmful for economic growth, the subject of a recent "Room for Debate" feature in The New York Times.

In an era of flagging growth rates and a renewed reform impetus from the incumbent government, the possibility that excessive inequality could be bad for the economy may be the most important lesson to come out of the Forbes billionaire list.

Vivek Dehejia is an economics professor at Carleton University in Ottawa, Canada, and a writer and commentator on India. You can follow him on Twitter @vdehejia.