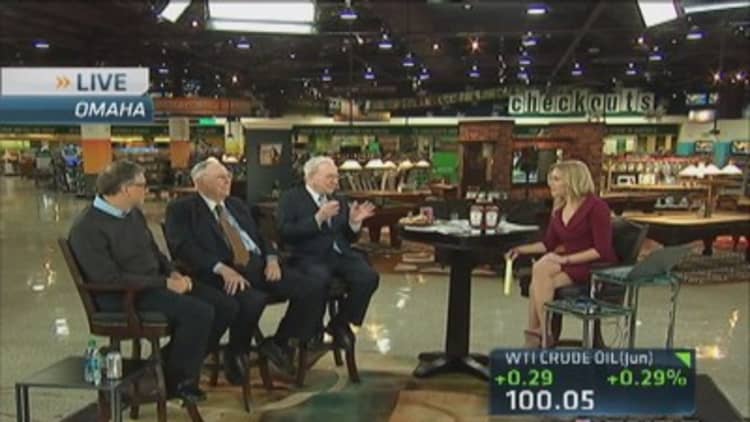 In a live appearance featuring the three men on CNBC Monday morning, Munger said, "It's the functional equivalent of letting rats into a granary" and "does the rest of the civilization no good at all."

Gates, a Berkshire Hathaway board member and chairman of Microsoft, agreed. "It doesn't seem like it's much value-added because when you really need the liquidity it's not guaranteed to be there... It seems like a strange sort of profit."

Bill Gates, Charlie Munger and Warren Buffett participate in a "selfie" taken by CNBC's Becky Quick in Omaha. In a live interview, Buffett said based on his experiences with college students who visit Omaha, selfies are "all the rage." Estimated net worth of the three men in the picture: $143.1 billion.

In addition, "To the extent that it is front running, I think society has generally been against front running for good reasons... Here they've gained an advantage by figuring out how the system worked and getting there first and that adds nothing" to economic activity."

On the other hand, he said, high-frequency trading isn't costing the average investor a "penny." "They've never had it so good."