A married 31-year-old marketing executive living in Tokyo told CNBC she would like to have a baby, but the decision is difficult. Like most Japanese women she says it can feel like a choice between having a family or a career.

"My work is interesting and it's kind of a disadvantage to take maternity leave," said the woman, who preferred to remain anonymous.

For many people in Japan parenthood isn't appealing, which is a major problem for the world's third-largest economy as it pursues radical economic reforms in a bid to drag itself out of deflation.

Japan's fertility rate is among the world's lowest. With the government projecting the population will shrink one third to 87 million by 2060, the implications are clear: a smaller work force, reduced productivity and less tax revenue.

"Economies rely on the youth. They are the growth engine and create the consumer class as they grow and mature," Vikas Shah, founder of consultancy Thought Strategy told CNBC.

The current generation is forging their careers, making money and spending it, but not building families Shah said. "The problem will occur as that generation finds it incredibly hard to bring any new blood into their companies in Japan."

No sex in the city

Thirty percent of Japanese men in their 20s, and the same percentage in their 30s do not have any dating experience, a 2013 survey by Japanese insurance company Meijji Yasuda Life showed. Meanwhile, 45 percent of women aged 16-24 'were not interested in or despised sexual contact,' and more than a quarter of men felt the same, a 2014 survey by the Japan Family Planning Association found.

"From some Japanese men's perspective there's little need to have relationships. They see their finances being essentially halved when you get a wife and if you have a child along with that even more," Dan West, digital strategist and innovations manager at London-based advertising agency FCB Inferno, told CNBC.

Japan's love of technology could be part of the problem, according to the 2014 BBC documentary 'No Sex Please, We're Japanese'.

The makers found that video games offering virtual replacements for real-life relationships such as Nintendo's 'LovePlus' are popular with grown men. They prefer the ease of virtual relationships which allows them to avoid the pressure of getting married.

And in the real world, Japan's expansive sex industry could also be viewed as an obstruction to traditional family life. Although prostitution is illegal on paper it is still prevalent. Meanwhile, hostess and host clubs offer men and women non-sexual companionship at a price. Some might argue that these services discourage people from pursuing relationships. 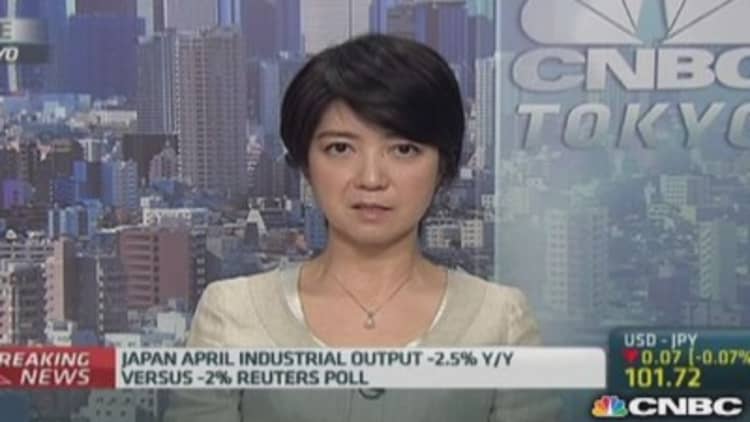 Improving the work-life balance is the first step. Japanese working environments are often inflexible, which makes it difficult to balance parenthood with a career. Prime Minister Shinzo Abe aims to encourage mothers to enter the workforce through more flexible hours and better child-care options.

"It's almost impossible nowadays to work the hours that are expected of Japanese people while trying to raise a family," said West.

Meanwhile, Abe has allocated $3 billion yen ($29.3 million) to reversing the nation's plunging birth rate by funding matchmaking and dating services. The government is also re-thinking its immigration policy; some cabinet members want raise the amount of immigrants allowed to settle in Japan to 6 percent of the population from 2 percent currently.

But analysts told CNBC these policies would not have much impact on Japan's economy in the short term.

"The overall impact on the economy is of course negative in the short and mid-term because it produces costs and doesn't produce additional productivity and growth straight away," said Martin Schultz, senior economist at Fujitsu Research Institute.

"The idea that mothers can have it all because of Abe's moves to make it easier for women to work - that will take a little while to change things," added West.

Many analysts view Japan's celibacy issue as a deeply entrenched long-term problem, but others are more positive.

While Japan is a difficult country for other cultures to assimilate into, Thought Strategy's Shah said values could shift between generations as the economy opens up to new cultures by necessity.

"We may not end up with the sexually-charged-party-fest of Ibiza, but maybe somewhere between Japan and that wouldn't be such a bad thing," he said.