Georgia's first-place finish in our 2014 America's Top States for Business rankings set off the central debate in all 50 states in this midterm election: which party is best for business—and for job creation?

Groups on both sides have unleashed a deluge of campaign funds to settle the question, in this most expensive midterm election in U.S. history.

Georgia Gov. Nathan Deal steps away from the podium after speaking at a press conference, Monday, Oct. 6, 2014, in Atlanta.
David Goldman | AP

In Georgia, incumbent Republican Gov. Nathan Deal wasted no time in June trying to turn the state's No. 1 CNBC finish into a campaign theme.

"These rankings are a testament to the commitment from Georgia businesses, communities, our economic development partners and the people of Georgia," Deal said in a statement the day we revealed our findings.

In the state's U.S. Senate race, Republican David Perdue has likewise put business competitiveness front and center, boasting on his website of "creating thousands of quality jobs" as CEO of Dollar General and Reebok.

But a funny thing happened on the way to a Republican sweep in America's Top State for Business. The Georgia economy has sputtered a bit. Job creation—one of the keys to the state's top ranking—has slowed. While the state still ranks in line with the national average for job growth year over year, it was one of only 10 states to lose jobs in September, according to the U.S. Bureau of Labor Statistics. At 7.9 percent, Georgia's unemployment rate is now the nation's highest.

As a result, polls have shown both Republican candidates in the fights of their lives, as their Democratic opponents—State Sen. Jason Carter campaigning to replace Deal, and former nonprofit CEO Michelle Nunn seeking to recapture the Senate seat once held by her father, Sam Nunn—cede no ground on the economy, and hit the recent hiccups on jobs hard.

"Under the governor's plan, the middle class has been left behind, and we're all feeling that pain," Carter, grandson of former President Jimmy Carter, said in an Oct. 26 debate.

Nunn, meanwhile, claimed in a recent TV ad that Perdue "spent most of his career moving U.S. jobs overseas," a charge Perdue dismisses as "desperate."

The Georgia governor's race is among the most expensive in the country. The Senate campaign, with nearly $40 million spent so far, according to the Center for Responsive Politics, trails only the high-profile Senate race in Kentucky, where Senate Minority Leader Mitch McConnell is neck-and-neck with Democratic challenger Allison Lundergan Grimes.

Read MoreState winners and losers in the jobs war

Nationwide, business-oriented groups like the U.S. Chamber of Commerce and Americans for Prosperity, which is backed by the billionaire Koch brothers, have been funneling unprecedented amounts of money toward Republicans. On the Democratic side, the Senate Majority PAC and the NextGen Climate Action Committee founded by former hedge fund manager Tom Steyer have been cranking up the money machine. But on the eve of Tuesday's election, several key races in addition to those in Georgia—and the debate over jobs—remain up in the air. 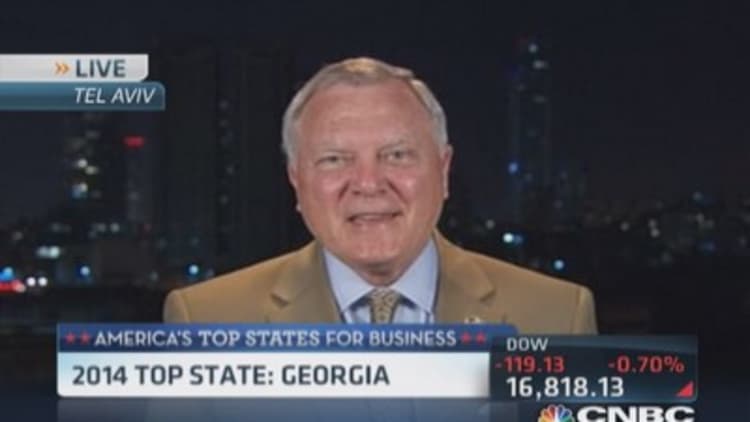 Take Wisconsin, where incumbent Republican Gov. Scott Walker has been locked in a statistical dead heat with Democratic challenger Mary Burke. If he loses the race—and his 2016 White House hopes in the process—the post mortems will almost certainly center on the fact that Wisconsin has added fewer than half the 250,000 jobs Walker promised in his first term.

"I'm a business person. I know how jobs get created," said Burke, a former state commerce secretary and CEO of her family business—Trek Bicycle—during an Oct. 17 debate.

But Walker says the economy is rebounding on his watch, including 8,400 jobs added in September.

"That's the best September for job creation in more than a decade," he said in the debate.

In Florida, easily the nation's most expensive governor's race, the election is also a tossup. Incumbent Republican Gov. Rick Scott has staked much of his campaign on job creation, both in his first term as governor and as CEO of Columbia/Health Corp. of America. But on the Democratic side, former Gov. Charlie Crist has hit back hard, focusing on Scott's record on education—another measure of economic competitiveness. Florida ranked 38th for Education in America's Top States for Business this year.

And in Colorado, which ranks fifth in the nation for job growth and boasts an unemployment rate of just 4.7 percent, incumbent Democratic Gov. John Hickenlooper is nonetheless deadlocked with Republican challenger Bob Beauprez, who has targeted Hickenlooper's record on crime.

The 2014 midterms won't decide which is America's Top State for Business—our 2015 rankings are just around the corner. But Democrats and Republicans are locked in a fierce and expensive battle to decide who will position their state the best.