An economic implosion is becoming increasingly likely in Venezuela, and the country's debtholders, trade partners and neighbors are bracing for the fallout.

Meanwhile, a combination of inflation and currency controls have generated scarcity of basic needs such as flour, toilet paper and medicine. Venezuelans stand in lines for hours waiting to buy whatever may be available. Shortages have even diminished the country's ability to provide medical care.

The government of President Nicholas Maduro has been scrambling to find cash. China, Venezuela's biggest creditor, has loaned it more than $50 billion in the last eight years.

Venezuela pays China with oil, and about half of the oil shipped to China goes to paying existing debt. So as the price of oil declines, the number of barrels it needs to send to China increases.

"Venezuela is committed to amortize its loans with oil. To amortize the loans, you have to multiply volume by price. If the price drops, you have to up the number of barrels shipped," said Pedro Mario Burelli, former member of the executive board of PDVSA, Venezuela's state-run oil company.

China plans to lend Venezuela at least $10 billion more in coming months as part of a bilateral financing deal and for the development of oil fields, Reuters reported last week. 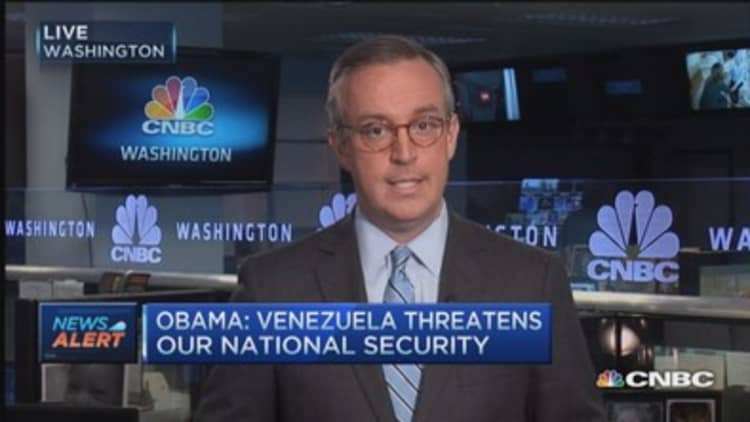 But if there's a default, experts don't think China would suffer much; the Asian giant is likely taking careful steps to protect itself.

"If China asked for guarantees before, can you imagine what they're asking for now that the country is on the brink of disaster," Burelli said. "China is not going to do anything that jeopardizes them. In a default scenario, they still will be in a good position because they have unique terms."

Burelli said the uncertainty in Venezuela makes it impossible to predict the timing of any default, but he said it's certainly a possibility. "A default could happen for two reasons: because you don't have money to meet your debt obligations, or because you can't keep prioritizing external debt over internal needs," Burelli said.

Read MoreIs Venezuela on route to disaster as sanctions hit?

Burelli, along with many other experts, doesn't doubt Venezuela's desire to honor its debts. But as circumstances worsen in the South American nation, Maduro could be forced to reprioritize and put the immediate needs of Venezuelans first, he says.

"Debt payment is a priority now, but problems in Venezuela are getting worse. There are different kinds of problems that could lead to Venezuela to default," Burelli said. "There are a lot of deaths in Venezuela because of a shortage of basic supplies needed in any health system. That will consume interest payments, and the amortization of principal that you thought could be made, but that you won't be able to make."

Trading partners: The good and the bad

A bank note with the face of Venezuela's President Nicolas Maduro and the word "devaluated" at a market in Caracas.
Jorge Silva | Reuters

Some of Venezuela's trading partners are already reaping the benefits of the country's struggles. Smaller nations that have taken delivery of Venezuelan oil, for example, either have managed to negotiate reduced payments for those shipments or may yet do so.

In January, Maduro's government accepted a $1.9 billion lump debt payment from the Dominican Republic for years of past oil transactions, a sum marked a huge discount to the $4.1 billion market value of those oil shipments. A similar deal with Jamaica could be in the works.

Venezuela would have to make further, drastic changes in order to avoid a default, many of which would affect trade partners: slashing imports, raising domestic gas prices, changing its currency control system or cutting off subsidized oil shipments that it makes to Cuba.

Venezuela is a longtime provider of energy aid to other Caribbean nations through a subsidized-energy alliance called Petrocaribe. Cuts to that aid could create an economic threat to the entire region.

"The cost of doing business in a number of countries that rely on Petrocaribe oil is already extraordinarily high, primarily because they use outdated and outmoded energy sources," said Daniel Hanson, an analyst at Height Securities. "I think any nascent signs of growth in these Latin American and Caribbean countries that are reliant on Petrocaribe are likely to be sapped by the increased cost, primarily electricity."

That said, at least one country in the region could benefit from a Venezuelan collapse: Trinidad and Tobago. The island nation has the largest oil and natural gas reserves in the Caribbean and could take away Petrocaribe customers.

Venezuela is the second-biggest destination for Colombian exports, after the United States. But exports have fallen significantly over the past year. Last year alone, exports to Venezuela fell more than 12 percent year over year.

Venezuela still has not raised prices on gasoline, which it very heavily subsidizes for its domestic market. The fear for Caracas, experts agree, is that such a move could trigger outright violence in the country.

Venezuela last raised gas prices in 1989, resulting in the "Caracazo" or "Caracas disaster," in which fuel price increases led to major social unrest that resulted in hundreds of deaths.

"A rise in gasoline prices will lead to a rise in public transportation and cargo, causing major inflationary pressure, and that will increase the risk of a social explosion," said Diego Moya-Ocampos, a senior political risk analyst at economic data firm IHS.