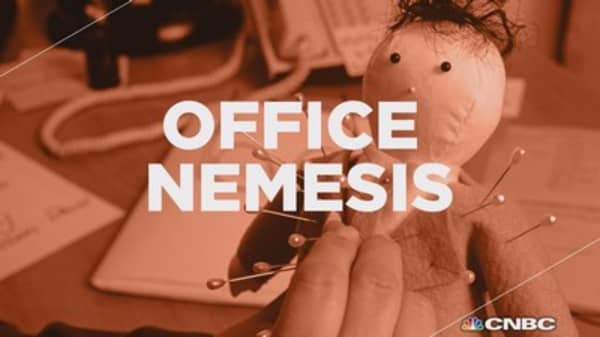 Everyone has an office nemesis. And if you don't, maybe you aren't working hard enough. But just like in the movie "Mean Girls," they're there — and once you're in their crosshairs, they'll make your life hell.

Thought you left these people behind in high school? Think again.

There are early warning signs of a potential nemesis you should be on the lookout for — like, it's your first week on the job and someone wants to be your new BFF and confidante. Watch out. They'll give you tips about co-workers, invites to happy hour and advice that sounds like it should be stitched on a pillow. It's all a trap.

The key to surviving a nemesis at the workplace is identifying them, anticipating their next move and protecting yourself. Here are some of the classic nemesis types — and how to deal with them:

The Lifers. They've been at the company so long, they have the employee handbook memorized. They'll say, "Can you believe Turney did that? It's so clearly stated on page 72 of the employee handbook." You want to stay off their list. They key to defeating the Lifer? Patience. If you don't play in their reindeer games, they get bored and find a new victim. Oh, but do ask them for career advice. They love that.

Early Birds. They'll tell you that you don't need to come into the office before 9 a.m. — nothing happens on before then and you'll just be sitting around bored, they say. But the next morning, you find out that you're the last one in. Be the bird — not the worm.

The Sprinters. They can always be found near the boss's desk. They'll do anything to get ahead. They say things like, "I'd totally love to take your kids to the Justin Bieber concert!" It's like two dudes camping in the woods with a hungry bear. If you ask them if you think you can outrun the bear they'll say, "I don't have to outrun the bear… I just have to outrun you!" Don't try to outrun them; focus on endurance.

The Announcer. They carry around a clipboard and announce everything — including your personal calls. "Turney, your roommate Jason is on the phone! Your mom is on line two!" The solution is to do the exact opposite. The next opportunity you have to save them from embarrassment you should. They become disarmed and realize homie don't play that …

Nurse Jackies. If you check the side of your nemesis's desk, you'll find carved notches for every one of your vacation and sick days. They're taking copious notes. How do you defeat Nurse Jackie? There's not much to do, but wait. When she announces your 7th vacation day to the boss because it's Sharpied in her calendar, have something prepared. Make sure the higher-ups know the lengths to which they've been keeping tabs on you. No boss likes a tattletale.

Cubical Creepers. They sit right next to you and listen to ALL of your calls. You know this because they make suggestions after you get off the phone. The solution? Carefully set up some fake calls to drive them insane. Use first names of managers in satellite offices and construct the call to sound like plans and strategies are being discussed. Throw them off the scent.

The Friendsters. They'll want to friend, follow and connect with you on every social media network. They're gathering information — to use it later against you. Classic Art of War behavior. Your only tactic here is to not give anything away on social media.

Martyr, Martyr, Martyr. "I'll just do it!" they like to say. This is their semi-passive super-aggressive way of keeping control. The less you know — the better. In this case, do NOT be patient. Find some else to teach you the task immediately. Otherwise, they'll hog all the responsibilities — and you'll know nothing.

Read MoreDriverless cars and death: The best job of 2015

The Lone Wolf. They like to hang out in the corner — alone. They are extremely volatile and unpredictable — not a good combination. Your best bet is to find a common interest with them like their favorite sports team or band. Find anything you can to make small talk about. But don't get TOO close.

Gossip Girls. They love to trap you confined spaces like the elevator. They'll bait you into saying something bad about your boss — and then use it against you later. Do not engage… I repeat: DO NOT ENGAGE. Shrug your shoulders and smile when they try and trick you into being petty.

If you want to prevail over your office "Mean Girl," remember this lesson from "The Art of War": The "opportunity of defeating the enemy is provided by the enemy himself."

Commentary by Turney Duff, a former trader at the hedge fund Galleon Group. Duff chronicled the spectacular rise and fall of his career on Wall Street in the book, "The Buy Side," and is currently working on his second book, a Wall Street novel. He is also featured on the CNBC show, "The Filthy Rich Guide." Follow him on Twitter @turneyduff.

Turney DuffAuthor of "The Buy Side"