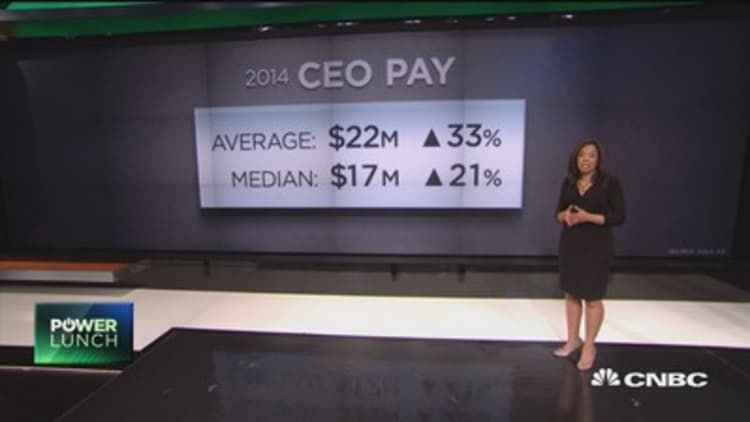 If you worry about saving for retirement, you have plenty of company. Just not in the C-suite.

The 100 largest CEO retirement accounts combined are worth $4.9 billion — equal to the retirement savings of 50 million American families, according to a new report by the Center for Effective Government and the Institute for Policy Studies think tanks. (Tweet This) The number of families represents about 116 million Americans, the report said.

Overall, the retirement assets of the 100 CEOs with the most stashed away average $49.3 million, which would generate a monthly retirement check of $277,686.

That figure is in sharp contrast to the median 401(k) account balance of $18,433 at the end of 2013, according to Employee Benefit Research Institute data. And apart from 401(k) plans, employees' retirement savings options are limited: Only 18 percent of private-sector workers had access to defined benefit pension plans as of March, according to the Bureau of Labor Statistics.

"Companies have been banking more money by not making their workers secure," said Scott Klinger, director of revenue and spending policies at the Center for Effective Government and a co-author of the study. When they cut the cost of providing retirement benefits to rank-and-file employees, he added, "the stock goes up, CEO pay goes up, and that increases their retirement assets."

The largest retirement nest egg in 2014, at $234 million, belongs to David Novak, now executive chairman of Yum Brands, the report found. According to regulatory filings, of the company's 537,000 employees around the world, just 8,828 had balances in their employer's 401(k) plan at the end of last year. (A spokeswoman said Yum offers every company employee a 401(k) with a competitive match and no vesting period.)

Jonathan Blum, chief public affairs officer for Yum Brands, said in a statement that "David Novak served as a senior executive with YUM and PepsiCo for 29 years, including 15 years as CEO. His deferred compensation was directly linked to the performance of the Company and primarily consists of bonuses he earned and deferred into YUM stock, which appreciated 900 percent during his leadership."

Blum added that Novak "chose to defer the majority of his compensation in YUM stock as he believes in the long-term growth of the Company, and this has been reported in the proxy every year. During Novak's leadership, YUM's Total Shareholder Return (TSR) increased over 1,100 percent."

Much of the executives' retirement assets are indeed in the form of elective deferred compensation — compensation they have chosen to delay receiving until retirement.

Money in these accounts is allowed to grow tax free until retirement (or until they are paid out), just like assets in a 401(k), but there is no limit on how much a senior executive can choose to defer.

Peter Neuwirth, a senior consultant and senior actuary with Towers Watson, said these plans enable highly compensated executives to put away a share of their pay just like rank-and-file employees using 401(k) plans. If they had to use 401(k) plans, the annual cap on 401(k) contributions, currently $24,000 for employees nearing retirement and $18,000 for those under 50, would likely represent a much smaller share or their earnings.

A guide to supplemental executive retirement plans, known as SERPs, by Voya Financial noted that "personal savings, Social Security and qualified plans may meet the retirement needs of many workers but more than likely will not be sufficient for today's highly compensated executives." It continued, "employer-funded SERPs are designed to reward executives who remain in the company's employment, devoting time and attention to building the profitability of the business."

Neuwirth added that executives using these plans put their money at greater risk than employees using a 401(k) because the money is not in a segregated account, and it could be wiped out by a change in control of the company or bankruptcy.

"Those accounts have been largely built up by the executives' deferring receipt of what they could have received in cash over the last several years," he said. And because the money is legally at risk if the company does poorly, "from a policy standpoint, the feeling is these are programs that align the executives' interests with the shareholders' interests and those of the company."

Executives' use of these plans does cut their annual tax bill. The report found that in 2014, Fortune 500 executives paid $78 million less in taxes than they would have if they had only been able to defer the same amounts as their employees.

"I think the argument that deferred comp aligns an executives interests with the company is quite a stretch," Klinger said in an email. "Most CEOs would be fired long before bankruptcy happens, and in most cases their deferred comp goes with them (unless there is fraud or something like that). Deferred comp is far more about the executive's tax planning than aligning interests."

At the same time, he pointed out, employees' access to retirement plans is declining. A study by the Schwartz Center for Economic Policy Analysis at the New School found that between 1999 and 2011, the availability of employer sponsored retirement plans fell from 61 percent to 53 percent.

"We have a generation of boomer retirees with less disposable income than the people who went before them, and they won't be spending on all the things the companies sell," he said. "You get the short-term profits, but you get the long-term weaker economy and weaker consumer income growth."