This ‘bubble blind’ Fed is going to trigger another brutal recession 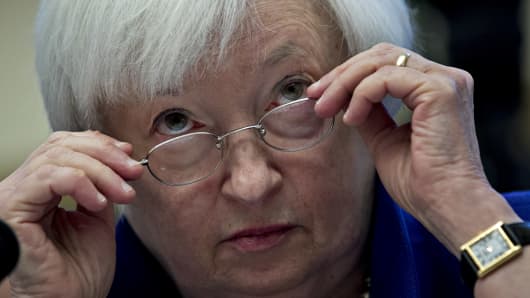 Federal Reserve head Janet Yellen is keeping alive the tradition of her predecessors, Alan Greenspan and Ben Bernanke, by showing she is equally as blind-sighted to the bubbles central banks are blowing in the bond and equity markets.

During her September press conference, Yellen stubbornly clung to the misconception that it is only possible to tell if a bubble exists after it bursts. And because of this delusion, in Yellen's eyes, 96 months of a virtual Zero Interest Rate Policy (ZIRP) is merely, and I quote, "a modest degree of accommodation."

Her blinders are so opaque that she claims to see, "no signs of leverage building up." And her feckless ability to spot market imbalances even resulted in this doozy of a Yellen quote: "In general, I would not say that asset valuations are out of line with historical norms."

Can it really be the case that the woman who holds a dictatorship on the cost of money, which is the most important price signal in an economy, is unaware that the stock market is at a level that is virtually the most overvalued in history? The median price-to-earnings, price-to-sales and total-market-cap-to-GDP ratios all show that the equity bubble is about as far detached from economic reality than at any other time in history.

For example, the market cap of equities in relation to the size of the economy is over 70 percent points higher than the level experienced from 1975-1990.

We have, indeed, climbed up to the very thin air historically speaking: The S&P 500 price-to-earnings ratios is currently around 25. The mean historically is about 15.

The air here is especially rare, given the fact that earnings have fallen six quarters in a row. According to Fact Set, earnings will drop by 2.3 percent year over year; and that is despite the dollar falling 4 percent and crude oil rising 20 percent so far in 2016.

Furthermore, Yellen's reckless money printing has led to a humongous rise in corporate debt. And to see this bubble, all she has to do is view the Fed's own data.

This corporate debt bubble isn't limited to the United States. Corporate debt in emerging markets has grown to $25 trillion, according to the UN Conference on Trade Development. This is 104 percent of emerging-market GDP, up from 57 percent at the end of 2008.

Household debt is also surging in the U.S. — up to a record $14.3 trillion, according to the New York Federal Reserve. And this impulse to take on debt at record low interest rates has spread across the globe. China, Saudi Arabia, Thailand, and Korea led the way with the largest build-up in household debt per adult since 2010, according to Institute for International Finance (IFF).

Global debt issuance is up 5.02 trillion dollars so far in the first three-quarters of 2016, according to Dealogic. This would put it on course to rival the all-time high of $6.6 trillion hit in 2006.

Central bank largess has caused government, household and corporate debt to surge across the globe; but according to Yellen, there is nothing to see here.

However, Yellen need not pour through the staid analysis prepared by the IFF or the UN Conference to see if central bankers have caused a debt pile with trillions of dollars' worth of free money. She only needs to muse the over-indebtedness of our over-leveraged federal government to see the bubble in bonds she has helped spawn.

And if none of those points convince her, perhaps the former MIT and Yale fellow should find it troublesome that sovereign debt from Switzerland, Germany and Japan totaling close to $13 trillion trades at negative yields. Thirteen trillion in negative yields screams bubble! Its time Yellen took off her blinders and her senses.

For the first time in the history of economics, corporations and governments are getting paid to lend money. This is the direct result of the 96 months of nearly free money from the Fed and the combined $15 trillion increase in central bank balance sheets since 2007. And this rate of central bank money printing is still growing at a rate of $200 billion each month.

The consequences of these actions has produced, for the first time ever, record bond, stock and home prices that all exist concurrently.

The problem this creates is that you can't escape these bubbles without destroying the phony economic recovery, which has been predicated on the Fed's wealth effect. Incredibly, Yellen recently went so far as intimating that the direct purchase of corporate equity and debt could be an appropriate course of action for the Fed to take during the next downturn.

But for now, Yellen appears ready to resume the rate-hike cycle it began last December. However, any such increase in interest rates will expedite the flattening of the yield curve and usher in the next brutal recession, along with what could be another 50-percent "haircut" in equity prices, which would be the third since 2000. And then our perpetually bubble-blind Fed will get that opportunity to purchase a humongous amount of securities in order to reflate the bubble once again — which the Fed still won't admit its culpability in, let alone acknowledge.


Commentary by Michael Pento who produces the weekly podcast "The Mid-week Reality Check," is the president and founder of Pento Portfolio Strategies and author of thebook "The Coming Bond Market Collapse."