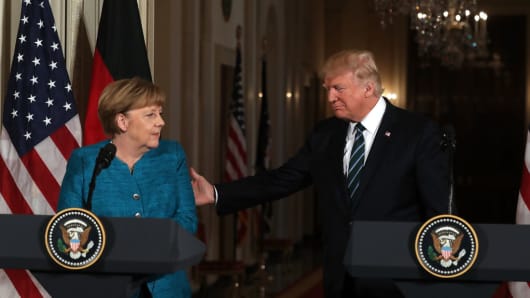 The story is simple and the numbers are big: The four economies that accounted for 81 percent of America's trade deficit last year sold $943.3 billion more goods than they bought from the rest of the world.

That's what you can call living off your trade partners. In somewhat more technical terms, you can also say that these four economies — China, Europe, Japan and South Korea, representing 43 percent of the global gross domestic product (GDP) — are a big drag on world economy.

The total size of these economic systems, and the amount of money they are taking out of the global demand and output, give you an idea of the difference they could make to the livelihoods of billions of people on our planet – if they changed their ways.

Imagine, for example, what would happen if their surpluses – approximately 1.3 percent of the world GDP – were "put back" into the production of goods and services that create jobs and sustain productive lives. And that could be relatively easy to do: They would just have to generate more growth from their household consumption and (private and public) investments, instead of pushing exports by suppressing domestic spending. (Recycling their trade surpluses to finance deficit countries is not a solution; that just perpetuates, and augments, trade imbalances.)

Trump does what the G-20 says

Taking a stand against excessive trade imbalances, and their huge costs for the U.S. economy, President Donald Trump is not indulging in trade protectionism and a bunch of other "isms" thrown at him by people: (a) who have problems with economics 101; (b) whose ox will be gored; and (c) who are ill-disposed toward recent political changes in the United States.

The American president is appealing, in his own way, for the application of long-standing rules of international trade adjustment that were intended to underpin an orderly and stable global economic and monetary system, established by Western democracies in the closing months of WWII.

More recently, G-20 economic summits have also been warning – to no avail – about the need to reduce trade imbalances because of their depressing and destabilizing effects on world economy.

And here is what these trade adjustment rules are saying. Trade surplus countries -- which typically also have low inflation and roughly balanced public sector accounts – are required to stimulate domestic demand in order to increase imports from their trade partners. Trade deficit countries – which in most cases also have accelerating inflation and widening budget deficits – are required to do exactly the opposite, i.e., they have to reduce public spending and raise taxes to cut imports and force businesses to export their way out of a shrinking domestic demand.

The architects of the post-WWII monetary system established these perfectly symmetric trade adjustment obligations for surplus and deficit countries because they knew that neglect of trade imbalances would undermine the world economy and the stability of financial markets.

Unfortunately, these adjustment rules were only imposed on deficit countries by their creditors. The European trade surplus crowd took itself for the paragon of economic virtue.

During the period of late 1950s and the beginning of 1970s, some of our "close friends and allies" would only take gold to settle their export bills with the U.S., while all of them were dumping the greenback to buy that yellow stuff. For them, the dollar simply was not good enough. But – then as now -- they took America's hugely expensive military protection and its open markets as their birthright.

Predictably, at some point the hemorrhage of America's Fort Knox treasure had to stop. And it did when President Nixon shut the gold window on August 15, 1971.

President Trump is not doing anything so drastic; he just wants to negotiate fair trade deals for America with people who are abusing free trade by rejecting the rules of symmetric balance-of-payments adjustment. Will he succeed?

My guess is that he will make more headway with China that with the German-run European economy. 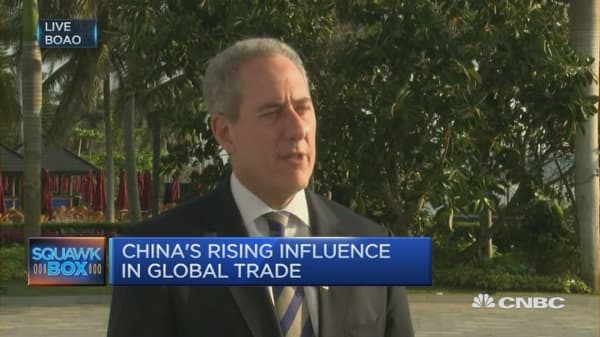 Observing things from afar, I believe that the proverbial Oriental wisdom has a better understanding of the pactum leonina than the European leaders who, in one form or another, should have encountered the Roman foundations of modern statecraft.

China's leadership seems prepared to correct an unsustainable trade relationship with the U.S., even though most of that problem was created by Washington. The U.S. practically set up China's manufacturing industries and gave them free technology transfers, broad access to American markets and fully dollarized trade transactions (by allowing China to run a de facto dollar peg for many years).

China pledged last Saturday at the Boao Forum for Asia to keep its economy open and to increase imports by $8 trillion over the next five years. That's a good signal that President Trump might have a productive meeting early next month with China's President Xi Jinping at Mar-a-Lago in Florida.

Europe? Germany is the main problem. Germans don't want to do anything; they are just furious that Washington dared to challenge their lucrative mercantilist policies. Painting President Trump as a crazy man, one of their most widely read newsmagazines recently ran a screaming headline "Einen Artz, Bitte" – "A Doctor, Please."

Instead of showing some willingness to reduce their $300 billion trade surplus (about 8.5 percent of GDP) to stimulate growth and ease euro area problems, Germans are threatening an EU trade retaliation against the U.S. And to get back at America, Berlin is pivoting to China. 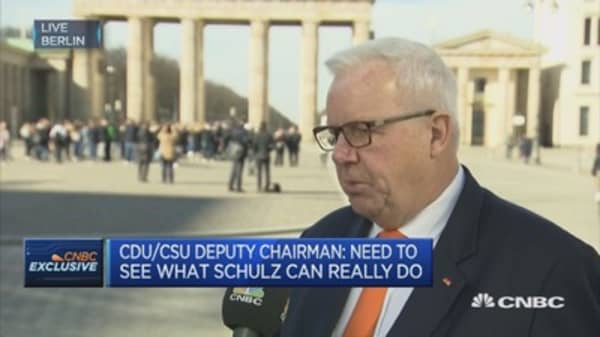 Chancellor Angela Merkel is also sending her "besonders herzliche Grüße" – "very cordial greetings" -- to Russia's President Vladimir Putin, a man she vilified, hit with crippling sanctions, but is now eager to meet in Moscow on May 2. When the Bavarian Prime Minister Horst Seehofer conveyed the chancellor's greetings at the Kremlin on March 16, the Russian president looked so surprised as if he could not believe what he just heard.

Germany holds the key to 22 percent of America's exports to Europe because German economic policies have a crucial influence on European growth and employment dynamics. And that is a big issue: Europe, the world's largest economic system, represents about 20 percent of the global GDP.

Instead of helping to keep that economy on a steady path of recovery, and to provide jobs to its 20 million people out of work (9.6 percent of the labor force), Germany is dragging Europe down with a trade surplus of 168 billion euros (2016 estimate) it draws from its closest trade partners. Indeed, Europe gives Germany 66 percent of its total net exports.

It is not clear what President Trump can do about this, but it seems obvious that Germany feels no urge to get off its export gravy train. And yet, only Washington can move Germany to unlock stronger growth and a more balanced trade in the grossly underperforming European segment of the world economy.

Meanwhile, the best hope for Europe is that the European Central Bank (ECB) continues to offset some of the damage done by Germany with an appropriately supportive monetary stance. 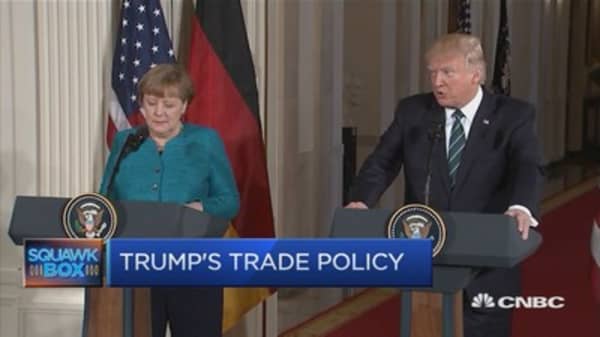 The U.S. will probably have a much easier job of striking a good trade deal with China. That would speed up Beijing's policy shift to establish household consumption, domestic investments and service industries as the main drivers of economic growth. Such a compositional change of the Chinese economy would open up great business opportunities for American companies, especially if Washington were also to join Beijing's Belt&Road trade and investment project that is currently active in about 50 countries in Asia, Africa and Europe.

A good trade deal with China would lead to similar possibilities with Japan and South Korea. These two countries are presently running a $97 billion trade surplus with the U.S.

Prospects for America's constructive trade policy review with Asia look good. China, Japan and South Korea – about a quarter of the world economy – have a combined total trade surplus of $650 billion. A substantial reduction of that surplus through stronger growth of their domestic demand – and increasing purchases from the rest of the world -- would be a considerable stimulus to global output and employment.