How states are crushing the $15 minimum wage movement 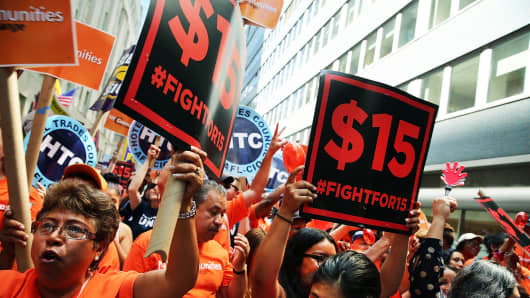 The Fight for $15, a campaign to organize the fast food industry, has encouraged a number of states and cities to raise their starter wage requirement as high as $15 an hour. But now, a backlash is building that could derail its momentum.

Last week, Baltimore's Democratic Mayor vetoed $15 wage legislation passed by the city council. Shortly before that the City Council in Flagstaff, Arizona voted to reduce from $12 to $10.50 a planned increase this summer. In Iowa, Republican legislators passed a bill to set one minimum wage at the state level, preempting a county-by-county approach that labor groups were pursuing. (Missouri legislators are trying to do the same.) And a Florida circuit court judge on Tuesday struck down Miami Beach's new minimum wage law that aimed to circumvent state rules.

What's popped the Fight for $15 bubble? Like many bubbles, the $15 minimum wage movement has been inflated by money and the media. The combined Fight for $15 campaign cost was as high as $70 million through 2015, a figure that will surely rise higher once 2016 data is available.

The Service Employees International Union is believed to have ponied up $20 million in 2015, and while the headlines have been eye-catching, the dollars spent haven't translated into new dues-paying members. It's unclear whether the SEIU can maintain this level of investment without a return: Bloomberg reported at the beginning of this year that the SEIU was cutting its budget by nearly a third in order to focus on 2018 and 2020 election races.

But perhaps the biggest reason for the recent Fight for $15 pullback is the very public evidence of its overreach.

Consider the wage ordinance in Flagstaff, which would have raised the city's minimum wage by nearly 50 percent in just six months. Numerous local small businesses including the Cultured Cafe yogurt shop, Flagstaff Nut House, and Country Host restaurant were forced to close their doors or cut staff as a result. Nonprofits in the city also sounded the alarm, warning that they'd be forced to close down or scale back dramatically if the hike went through. Flagstaff voters will have the opportunity to repeal further increases in the minimum wage, which is still set to reach $15 by 2021, on the November 2018 ballot.

The Flagstaff experience isn't unique. Across the country, countless small businesses have been forced to reduce hours, lay off their employees, or simply close altogether because of recent mandated wage increases. In Washington State, which passed a $13.50 minimum wage on Election Day, Walker's Pet Supply and Tattered Page bookstore are among the state's small businesses that have closed or reduced hours and job opportunities because of minimum wage costs.

In California's Bay Area, where numerous cities are experimenting with dramatic wage hikes, there have been so many restaurant closures in 2016 and now into 2017 that Eater San Francisco referred to it as a "death march." Many of the business owners cited "the price of labor" and "the costs associated with doing business" as key factors in their decision to close down.

This isn't just a restaurant problem. From call centers to coffee shops to clothing manufacturers, the state's businesses have been forced to take dramatic steps to adapt to wage requirements far above the historical average of $7.40 an hour.

Labor groups including the National Employment Law Project have portrayed the Fight for $15 backlash as a partisan or "corporate-driven" affair, but the facts don't neatly fit this narrative. Baltimore Mayor Pugh, who was endorsed during her campaign by a who's-who of Democratic notables, raised concerns about how the wage hike would affect the city's small businesses, including her own.

The Flagstaff City Council members who amended the minimum wage are politically diverse. And in Cleveland last year, the Democratic City Council rejected a $15 proposal for the city and then lobbied the state legislature for a law to preempt cities from going beyond the state standard.

This bipartisan opposition to $15 minimum wage extends beyond the legislative world to the academic one. A 2015 University of New Hampshire survey of leading U.S. labor economists found that nearly three-quarters opposed a broad $15 wage mandate. Skeptics of $15 include former members of the Obama and Clinton administrations; Georgetown University professor Harry Holzer, who served as Bill Clinton's top economist at the Labor Department, called $15 "extremely risky" and warned that it could reduce job opportunities for the least-skilled employees.

A resistance to the Fight for $15 is growing because of the economic realities of unreasonable wage mandates. That's good news for small businesses in other cities and states targeted by the SEIU's Fight for $15 campaign, but for the small businesses and employees who are paying the cost in the meantime relief can't come soon enough.

Commentary by Michael Saltsman, managing director at the Employment Policies Institute, which receives support from restaurants, foundations, and individuals. Follow him on Twitter @Mike_Saltsman.