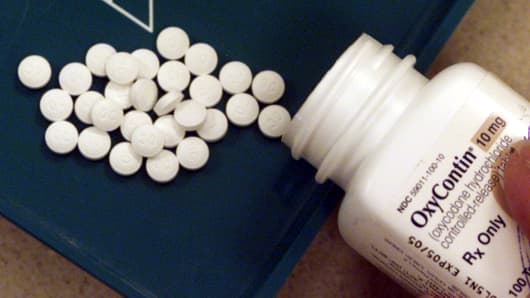 The most pressing health care story in America right now isn't the tortuous Obamacare replacement process on Capitol Hill. Instead, it's something that's making a growing and terrible impact on our economic, social, and physical health: Opioids.

In just the last month, the opioid epidemic and its devastating effect has been thrust into the spotlight. It started with Ohio Attorney General Mike DeWine's lawsuit against five opioid makers under his state's Corrupt Practices Act. Three weeks later, Missouri's Attorney General Josh Hawley followed with a similar suit. Both complaints claim the pharmaceutical companies that make opioids misled the medical community and the public at large about the highly addictive nature of their painkilling drugs.

But this week has also seen the publication of two devastating studies that put the opioid mess into the most dire terms.

First, we have the results from a survey of top medical experts in the health news website Stat that showed those experts believe about half a million Americans will die from opioid addiction or abuse-related deaths over the next decade.

Second, another medical study showed that half of all people getting opioid prescriptions are suffering from some form of mental illness. This is extremely problematic because people with mental illness have long been known to be more likely to succumb to addiction.

By all indications, this problem has been getting worse in recent years. And that's troubling for economic reasons as well as humanitarian ones. The most recent government report on this issue focused on the year 2014, and found that the overall economic costs of opioid addiction are at $55 billion annually. The same report found that 78 people died per day in 2014 because of opioid addiction and abuse, and that number has by all indications grown since then.

"In the continuing search for some way to make the GOP Obamacare replacement bill an actual positive for the nation, we could do a lot worse than pushing to include anti-opioid abuse plans in the measure."

The numbers are so bad that the opioid problem has become bipartisan. Lawsuits against pharma companies may seem like the kind of thing only Democrats do, but it should be noted that Ohio Attorney General DeWine and Missouri Attorney General Hawley are both Republicans. And last month, President Donald Trump appointed a bipartisan commission to come up with opioid addiction solutions that includes Republican and Democratic governors.

And while some of the legislation meant to fight this problem trends dangerously into over-regulation territory, some of the bipartisan proposals that advocate using more liberty to fight opioid abuse make a lot of sense. Two of the best of those measures is one that would make the opioid addiction-fighting drug naloxone more available to the public and the other is a call to protect people reporting opioid overdoses from criminal charges.

But more needs to be done. That's where the continuing health bill fight on Capitol Hill comes in. Putting some of those bipartisan measures into the Obamacare replacement bill would make it a lot easier for Republicans and even some Democrats to support.

A sticking point would be freeing up money for addiction prevention, which is something fiscal conservative Republicans may oppose. But trading that increased spending for spending cuts in other parts of the bill may win some of those conservatives over and net moderates like Maine Senator Susan Collins. Collins has expressed worry about funding cuts for addiction prevention that would come from the rollback in the Medicaid expansion.

This is yet another reason why Senate Majority Leader Mitch McConnell and the White House should strip out the Medicaid rollback from the bill entirely and deal with it separately. In the continuing search for some way to make the GOP Obamacare replacement bill an actual positive for the nation, we could do a lot worse than pushing to include anti-opioid abuse plans in the measure.

Of course, battling opioid abuse just to get a few more votes for a troubled national health coverage bill shouldn't be the point. The point is while both parties in Washington are trading future disaster scenarios based on whether the GOP bill is passed, the present is filled with a growing number of Americans already dying and suffering tremendously because of opioid addiction.

Just to bring economics back into it for a moment, remember that $55 billion per year cost of opioid abuse? By contrast, there are no claims that any Republican or Democrat health bill will give our economy a $550 billion or bigger boost over the usual 10 year period where the CBO makes those kinds of projections. So if political harmony and saving lives isn't enough, addressing the opioid problem is also a major economic positive.

Meanwhile, Americans are stuck watching a weird split-screen political situation where a hopeless partisan battle is being waged over a health insurance coverage bill while nothing much is being done right now about an actual growing health care emergency where bipartisan cooperation is much more likely to happen. Republicans and Democrats want to do something about this and a surprising number of them back a good deal of the same solutions.

With that in mind, whatever the Republicans do to address opioids in their Obamacare replacement bill would lend a new level of political credibility to the replacement process. But more importantly, it might actually save some lives.

Correction: An earlier version of this article incorrectly identified Mike DeWine as a Democrat. He is the Republican attorney general from Ohio.