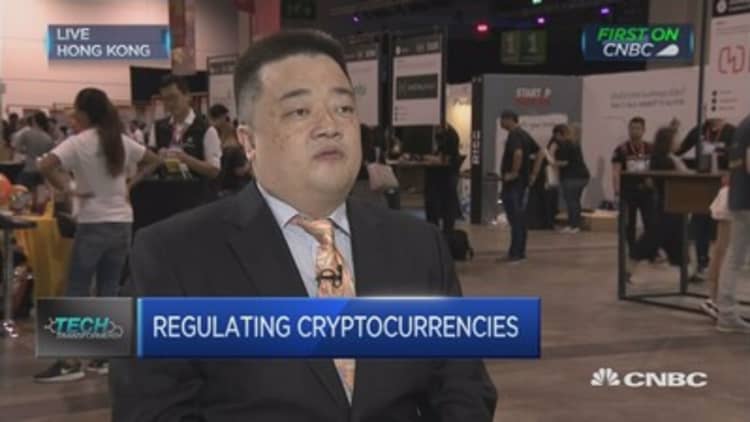 Cryptocurrencies need to be regulated or they risk going out of control as more people invest in these digital assets, the head of a major Chinese exchange platform warned on Tuesday.

Bitcoin and ethereum, two popular cryptocurrencies, have seen rapid price swings in recent months. In May, a 19 percent price fall for bitcoin saw nearly $4 billion in value wiped off. Last month, the price of ethereum crashed as low as 10 cents from around $319 in about a second on the GDAX cryptocurrency exchange. Because there's bullishness in the market, some predict bitcoin's price to soar as high as $100,000 in a decade.

"But the challenge is how to craft the rules around this new technology," he said at the sidelines of the Rise conference in Hong Kong. Lee added, "I think it's taking the lawmakers and regulators some time to wrap their minds around it, and to come up with the appropriate rules and laws to govern companies, how we do business, to govern individuals (and) how people conduct business online."

Regulators are exploring ways to regulate these digital currencies, and some have flexed their muscles in recent months. Earlier this year, the People's Bank of China stepped up its efforts to regulate the market, including setting up a task force to carry out inspections and ensure bitcoin exchanges had implemented anti-money laundering systems, and warned several exchanges against violating rules.

Some saw the moves from the PBOC as an attempt to crackdown on bitcoin and part of Beijing's broader attempts to stem capital outflows. But Lee disagreed.

"It's not really a crackdown," he said. "The central bank previously was not very aware of the details of how bitcoin is utilized, how bitcoin is traded."

He explained that the surge in bitcoin prices coincided with the massive capital outflows from China and the exchange rate changes of the renminbi against the dollar.

"There was a causation and correlation issue. People thought bitcoin was causing it — but after studying it more, I think the central bank has realized that bitcoin is not the cause of the change in exchange rate, nor is it the cause of the capital outflows."

Even then, some key voices in China are skeptical about the future of cryptocurrencies in the mainland. Earlier this month, reports said an adviser to the PBOC said virtual currencies like bitcoin are assets, but they do not have the attributes needed to be a currency that can meet modern economic development needs.

Lee said central banks need to embrace the fact that bitcoin is a new digital currency that's being traded actively in China and around the world.

"It's a new thing the central banks should pay attention to and figure out what the rules and regulations should be."