Investors who followed Social Capital's Chamath Palihapitiya into the early stages of two investments he advocated would have made an awful lot of money.

Palihapitiya was early in both Facebook, the ubiquitous social network, and bitcoin, the disruptive crypotcurrency that has sharply divided investors who continue to argue over its legitimacy.

Even with the major gains both have made, Palihapitiya remains hot on tech stocks in general, and bitcoin in particular. The digital currency, despite some volatile times, has soared nearly 300 percent this year.

That has come even though JPMorgan Chase CEO Jamie Dimon has called it a fraud that is doomed to fail.

"Nobody can stop it because nobody can control it," Palihapitiya said in an exclusive CNBC PRO interview at the Delivering Alpha conference on Sept. 12. "The idea that the government can put curbs on this is actually pretty specious."

Rather than debate its status as a currency or its use for nefarious purposes, he said there should be a broader discussion about how to put it to better use.

"As far as I'm concerned, the genie is out of the bottle," he said. "Now the real question is how can we productively use it to solve some of society's issues around the financial services infrastructure."

Click here for the full CNBC PRO report and the interview video.

WATCH:  Palihapitiya says bitcoin genie out of the bottle 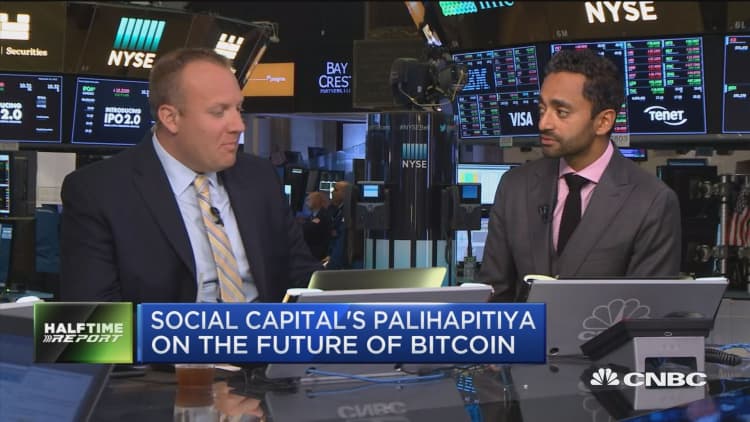 watch now
VIDEO3:0103:01
Chamath Palihapitiya on bitcoin: The genie has been let out of the bottle
Halftime Report