Markets
Business
Investing
Tech
Politics
CNBC TV
Watchlist
Investing Club
PRO
A Saudi woman registers to take part in a training programme for new female drivers at Careem, a chauffeur driven car booking service, at their Saudi offices in Khobar City, some 424 kilometres east of the Saudi capital of Riyadh, on October 10, 2017. Saudi Arabia's decision to allow women to drive had some sounding the death knell for ride-hailing apps like Careem, but its co-founder expects business to flourish and even plans to hire thousands of female d
FAYEZ NURELDINE/AFP/Getty Images

With women in Saudi Arabia allowed to drive from June 2018, some are looking at the newfound freedom as a way to forge a career and make a living.

Thousands of women have already signed up to be drivers for Middle Eastern ride-hailing app Careem, the company told CNBC Wednesday, amid its push to recruit a total of 100,000 female drivers in the Kingdom.

CNBC met some of the women who are training to become drivers for the service. One recruit wanting to become a Careem driver — or a "captain" as the company calls its drivers — said she saw a driving career as a way to have her independence.

That sentiment was echoed by another trainee, Nouf Abdulkader, who said the attraction of the job for her was "helping people" and "trying to get them where they want to be."

When Saudi Arabia's King Salman issued a decree in September announcing that a ban on women driving was going to be lifted on 24 June 2018, it brought the Islamic kingdom in line with the rest of the world. Although women are not formally banned from driving under Saudi law it is illegal to grant them a driving license under the current system, effectively creating a ban. 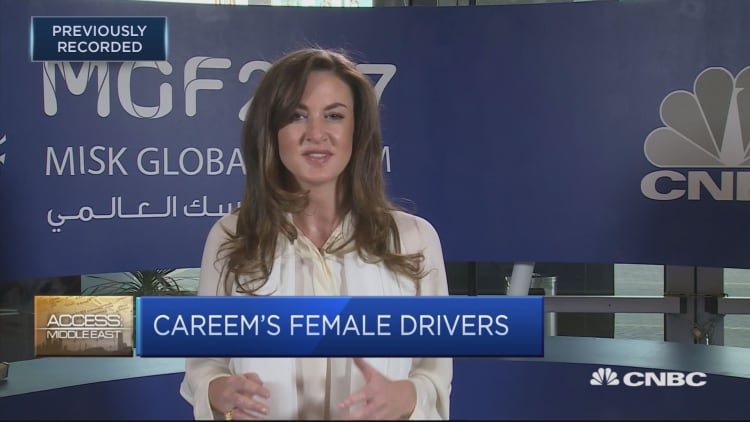 Women across the country and beyond celebrated the reform, which is seen as part of broader changes led by the king's son and successor Crown Prince Mohammed bin Salman, who wants more women to enter the workplace. Among those women celebrating the announcement was Raniem Al-Lahham, one of Careem's female trainers who teaches recruits about traffic rules in Saudi Arabia and company policies.

She said she was "so excited" about the lifting of the driving ban. "We're so proud of this decision," she told CNBC Wednesday. "We were waiting for too long. Everyone's excited and we've had thousands of women register to become drivers in Careem," she said.

For her, the biggest challenge was changing perceptions in Saudi Arabia about women getting behind the wheel. "The biggest challenge is that the Saudi community is not familiar with driving with a woman but we will manage this, inshallah (God willing)," she said.

'We just want to try it'

Women have not been allowed to drive in Saudi Arabia because of the country's strict religious rules, with some Islamic scholars saying that women were not intelligent enough to drive and that it was morally unacceptable. One Saudi cleric made news in 2013 for claiming that driving risked damaging women's ovaries. In September, a Saudi cleric was reportedly banned from preaching after he said women should not drive because they become distracted by shopping, which caused their brains to shrink to a quarter of the size of a man's.

Nonetheless, a royal decree is hard to argue with and the Council of Senior Scholars (an influential council of religious scholars and the country's highest religious body) welcomed the crown prince's decree that the ban was to be lifted, saying the "majority" of the council welcomed the news.

Despite some wariness over such a cultural shift, Careem is attracting female recruits from more conservative backgrounds. Hadeel Abdulaziz AlRashed could be viewed as one of those recruits. She wears a niqab, a face veil with a slit for the eyes that is not compulsory in the country but widely worn by more conservative women. She told CNBC that she had been inspired by women driving in other countries.

"We didn't do it before and when we're going in other countries we see a lot of the people driving cars and we want to try it," she said. 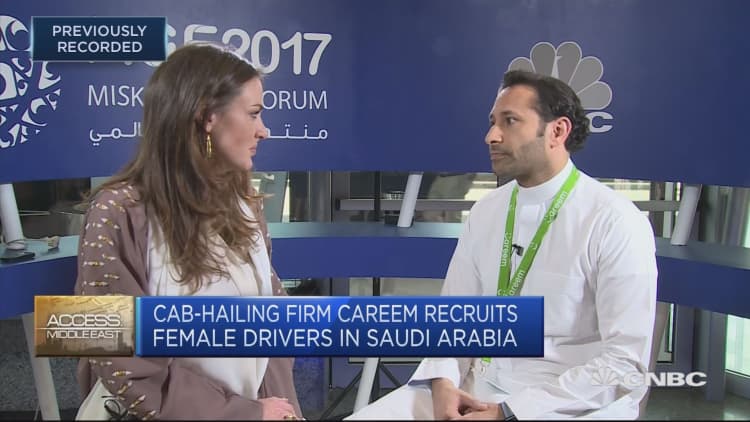 Careem's co-founder Abdulla Elyas told CNBC Thursday that the ride-hailing app was quick to react to the royal announcement.

"On the day when the royal decree was announced we announced immediately that we were happy to open our platform for 100,000 women to come on board and to drive for us so this is the captain, the female captain that comes on board and supports their families and their customers."

He also noted that the decision to allow women to drive was going to allow more conservative members of Saudi society to feel comfortable using its product.

"This is going to be amazing for especially very conservative women in our societies who so far were not really jumping on car hailing because they wanted a female captain to come and pick them up. For them now the barrier to entry as a customer has been taken away and we hope that the business is opening up a new customer sector."

Careem is not alone in the Middle East with rival Uber vying for market share in the region. But the Dubai-based ride-hailing firm has managed to expand across the region since its foundation in 2012, now operating in 53 cities across North Africa, the Middle East and South Asia.

In June 2017, carmaker Daimler and Kingdom Holding, owned by billionaire Prince Alwaleed bin Talal, made a $150 million investment in the company, as well as venture capital firm DCM Ventures and hedge fund Coatue Management. In addition, Chinese ride-hailing giant Didi Chuxing announced in August that it was forming a "strategic partnership" with Careem to expand in the Middle East and North Africa.

The fundraising for Careem lifted investment in the firm to $500 million from $350 million last December when government-controlled Saudi Telecom Co. (STC) bought into the company, Reuters reported.

Ride-hailing apps are already popular with women in Saudi Arabia who, unable to drive until the ban is lifted, have to rely on being driven around by male relatives or using taxi services. But by taking on women drivers, Careem appears to be attempting to differentiate itself and localize its product.

Uber, which operates in 18 Saudi cities, also announced in early October that it also intended to set up a specialized training center for women that want to work for the company, stating that 80 percent of the users of its ride-hailing app are women, Al Arabiya reported.

Ironically, women being able to drive could damage the ride-hailing app business.

One poll by Kantar TNS asked 217 female Saudi residents and 299 male residents to give their opinions on the royal decree in late September. The results showed that 82 percent of women planned to get a driving license once the ban was lifted and that 92 percent of women said that they would reduce their reliance on taxis and services like Careem and Uber. The poll also showed that 61 percent saw the decree as a positive step for society, 55 percent felt a sense of empowerment from the decision and 46 percent expected better career opportunities.

With Saudi women on the cusp of a newfound freedom and the potential challenges it could bring to the business, Careem co-founder Abdulla Elyas told CNBC that the mixture of cultural reform and technology was changing society.

For some, being on the road will be life changing. Careem trainer Raniem Al-Lahham said that come June 2018, she will be overjoyed at being on the road. "It feels so independent, it feels so free and I feel so proud that I'll be driving in Saudi Arabia as a woman."