To fix health care, we need to expand Medicaid, not cut it 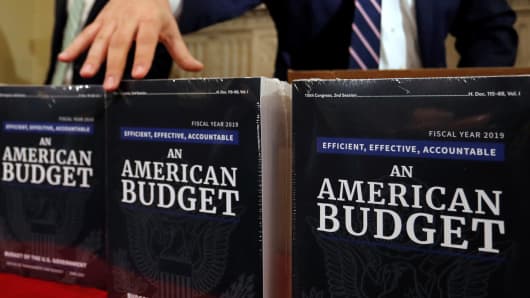 Trump's proposal, which also targets Medicare, isn't law or expected to become one, but claw backs to Medicaid are clearly on the Republican-led government agenda. The budget proposal is, by its own admission, a retread of the Obamacare repeal bill Republican senators Lindsey Graham and Bill Cassidy failed to pass in September. On top of that, eight states — seven of which have a Republican governor — have already taken the Trump administration up on its offer to approve work requirements for their Medicaid programs.

Deep cuts to Medicaid would cost millions of needy Americans health care coverage. (One analysis of the Graham-Cassidy bill put that number at 22 million through 2026 and Trump's budget cuts are actually much deeper.) They would also do absolutely nothing to fix the U.S. health care system. In fact, existing problems with Obamacare would be exacerbated.

If Trump wants to make health care affordable for all — a promise the president made repeatedly on the campaign trail — he should encourage Medicaid expansion, as Obamacare originally intended.

Arguments against "Medicaid for more" are increasingly thin

Medicaid requirements have varied across state lines since the program was created in 1965. The Affordable Care Act attempted to change that, requiring states with Medicaid programs to cover any American making up to 133 percent of the poverty line, not just low-income parents, caretakers, pregnant women and elderly or disabled residents. That provision, however, became optional after it was challenged and overturned by the Supreme Court. Thirty-three states (plus Washington, D.C.) went on to expand Medicaid; 18 (largely red) states have not.

But ideological arguments against Medicaid-for-more have lost credibility in the wake of broad public support for the program. A whopping 84 percent of Americans believe it's important that federal support for the expansion remain in place, according to a 2017 poll from the Kaiser Family Foundation. And, just a few months ago, Maine voters chose to fund state Medicaid expansion as part of a ballot initiative to circumvent Republican Governor Paul LePage's repeated refusal to do so.

Meanwhile, studies conducted post-Obamacare lay waste to commonly cited fiscal concerns — as should the GOP tax bill, which increases the federal deficit by $1.4 trillion in exchange for tax cuts that disproportionately benefit the rich.

Importantly, Medicaid expansion made insurance more affordable for residents who don't qualify for subsidized health care. A 2016 report from the Assistant Secretary for Planning and Evaluation (ASPE) found Obamacare marketplace premiums in expansion states were about 7 percent lower than premiums in non-expansion states.

Lower premiums encourage healthy-but-uninsured Americans to buy a marketplace plan — and are more important than ever, now that the GOP has successfully repealed the tax penalty for foregoing health insurance. These premiums cover the medical costs for sick participants and preclude insurers from jacking up prices or fleeing the exchanges.

In other words, they keep Obamacare afloat, which is important given Republicans have yet to propose a replacement for it that won't swell the ranks of uninsured Americans.

High uninsurance rates have a negative impact across the insurance market — and society at large. Studies have found the federal and state governments — and ultimately taxpayers, employers and health care consumers — cover the costs hospitals and health care providers incur when they treat people without a health care plan. Those costs are astronomical: A 2017 study from the Urban Institute found a partial repeal of ACA would cause an additional 30 million uninsured people to seek $88 billion in uncompensated care.

A hole in Obamacare

Pushing Medicaid expansion also plugs a serious hole. Obamacare provides premium subsidies to people who earn between 100 percent and 400 percent of the federal poverty level. Its Medicaid expansion was meant to cover childless adults who make below that 100 percent threshold, but otherwise didn't meet their state's criteria for aid. In non-expansion states, these Americans are now unable to find health care. They can't qualify for Medicaid, but they also can't get premium subsidies, so they must pay thousands of dollars of year for coverage or go uninsured.

Policygenius reporter Myles Ma recently profiled Elaine Upshaw, a Georgia woman who is actually too poor to get help paying for health insurance. Upshaw's household income (about $2,200 a month) is below 100 percent of the federal poverty level, so she can't qualify for premium subsidies. But, since she's not pregnant, elderly or disabled, she's ineligible for Georgia's Medicaid program, too. As a result, the most affordable plan she found during 2018 open enrollment came with a $678.05 monthly premium and a $6,800 annual deductible. If Upshaw lived in, say, California, which expanded Medicaid to cover all low-income incomes, she would have health insurance with no premium, no co-payment and no out-of-pocket cost.

Were Trump's budget proposal or a similar widespread move to curtail Medicaid to become official, many other low-income Americans similarly find $15,000 plans on Healthcare.gov as their only health insurance option. That's a far cry from the affordable health insurance Trump and his fellow Republican lawmakers have promised the American people.

Commentary by Jennifer Fitzgerald, the CEO and co-founder of Policygenius, an independent digital insurance company for consumers. Previously, she was a junior partner at McKinsey & Company where she advised Fortune 100 financial services companies on marketing and strategy. She is a graduate of Columbia Law School and Florida State University. Follow her on Twitter @jenlfitzgerald.