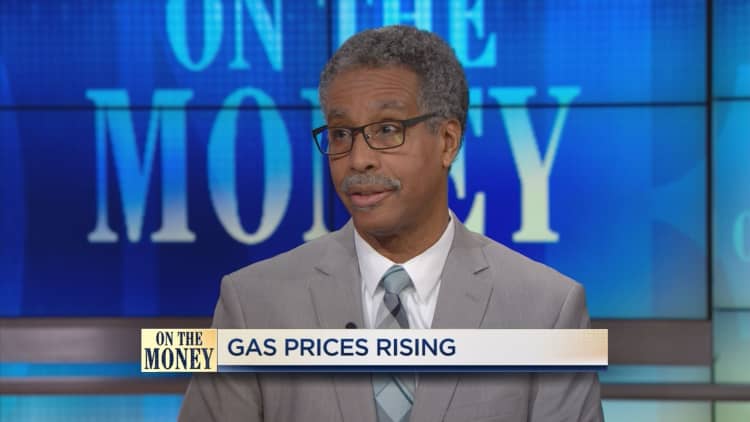 If it seems to be costing you more cash to fill up your tank these days, you're right.

"We've gotten accustomed to cheaper gasoline over the past couple years," Robert Sinclair, AAA Northeast Manager of Media Relations told CNBC's On The Money in a recent interview.

According to AAA, the average cost of a gallon of unleaded regular is about 25 cents more than this time last year.

With fewer miles driven, and less demand during the cold winter months, winter gas prices are usually lower. Why the price spike now?

"We're still riding the wave, if you will, as a result of Hurricane Harvey, where gasoline prices jumped up afterwards," Sinclair said.

Sinclair attributes the higher prices to a combination of factors including "the effects of the production cutbacks by OPEC and non-OPEC foreign producers finally kicked in, not to mention speculative money going into crude oil futures."

With cheaper gas the past few years, buyers have been choosing bigger vehicles.

According to Ward Auto, in 2016, 62 percent of U.S. vehicle sales were trucks, which includes pickups, SUVs and crossovers. Cars were the remaining 38 percent of the total. Back in 2012 it was nearly even. Trucks were 51 percent of sales, and 49 percent were cars.

"Right now, there's a lot of big, heavy, thirsty vehicles out there on the road." Sinclair said. "That's going to play into ... whether or not they'll be able to gas those things up."

A new AAA survey asked consumers if there was a gas price point that would make them "change their driving habits or lifestyle to offset higher gas prices."

"And we're there, we're at that level in a lot of cities, a lot of metropolitan areas around the country," he said.

On the Money airs on CNBC Saturday at 5:30 am ET, or check listings for air times in local markets.