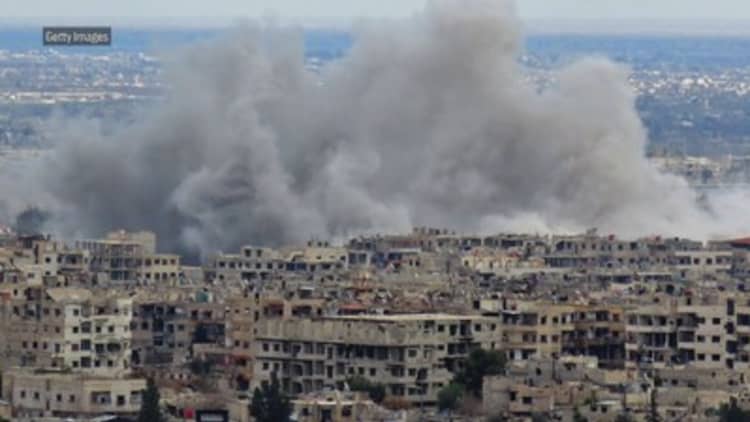 watch now
VIDEO1:0401:04
Trump tweets that Russia should "get ready" for a U.S. missile strike in Syria
News Videos

President Donald Trump lobbed back at Russia via Twitter Wednesday morning, promising to fire missiles at Syria in response to a recent chemical weapons attack allegedly carried out by the government of Syrian President Bashar Assad.

"Get ready Russia, because they will be coming, nice and new and 'smart!,'" Trump said.

"You shouldn't be partners with a Gas Killing Animal who kills his people and enjoys it!"

This latest tweet comes after Trump took aim at Russia's government in a rare rebuke on Sunday, directly criticizing Russian President Vladimir Putin for Moscow's support of Assad and vowing a "big price to pay."

Amid rumors that Washington may take military action over the chemical attack, a Russian senior official Tuesday threatened that Russia's military would shoot down any U.S. missile that entered Syrian airspace, including targeting launch sites.

"If there is a strike by the Americans then ... the missiles will be downed and even the sources from which the missiles were fired," Russia's ambassador to Lebanon Alexander Zasypkin told local media.

Early Wednesday morning, European air traffic control issued a public warning to airlines over the danger of air-to-ground strikes or cruise missiles when flying over the eastern Mediterranean Sea. Eurocontrol said that air strikes into Syria could take place over the next 72 hours.

Forty minutes after his initial tweet, Trump posted a follow-up, describing America's relationship with Russia as "worse now than it has ever been," adding that "there is no reason for this." He ended the tweet with what may be interpreted as a quick attempt at de-escalation: "Stop the arms race?"

Stock index futures dropped ahead of the open Wednesday after Trump's hint of possible intervention. The Dow is expected to drop more than 200 points on the back of the news.

Trump's "smart" missiles line was likely in reference to Putin's claim in early March that Russia's military had developed a new prototype missile that can reach any point in the world. The claim has not been independently verified.

A spokesperson for the Office of the Secretary of Defense told CNBC: "We do not comment on potential future military operations. The president has a wide variety of tools available at his disposal. I am not going to comment on or speculate as to what those options are or what decision the president might ultimately make."