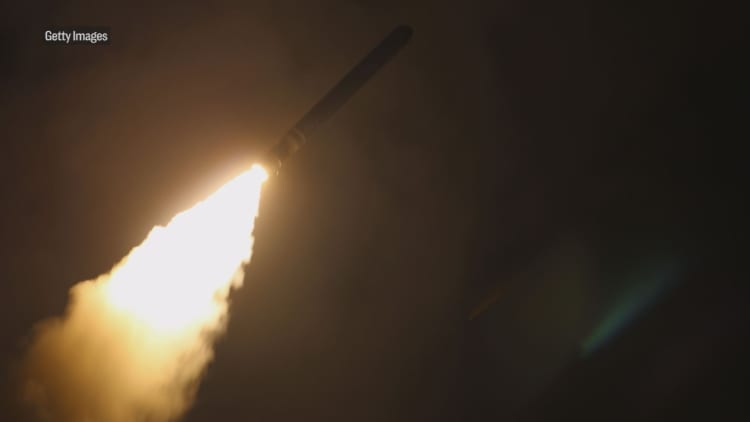 watch now
VIDEO0:5300:53
Russia claims it has a US Tomahawk cruise missile and will use it to improve its own weapons
News Videos

Russia has gotten its hands on a U.S. Tomahawk cruise missile and it's going to study it to improve its own weapon systems, the Defense Ministry said Wednesday,

However, the U.S. Department of Defense told CNBC that the claims from Moscow are "absurd."

An official within Russia's ministry said that an unexploded Tomahawk cruise missile and one high accuracy air-launched missile that the U.S. and its allies used in their last airstrike in Syria on April 14 has been brought to Moscow, Russian news agency TASS reported.

"Some of the missiles failed to reach the designated targets apparently due to technical failures, which created the risk of destroying civilian facilities and causing civilian casualties," Rudskoy said.

"Two of them, a cruise missile Tomahawk and a high-accuracy air-launched missile, have been brought to Moscow," he said, adding that Russian specialists were studying them.

"The results of this work will be used to improve Russian weapon systems."

A Pentagon spokesman for the U.S. Department of Defense blasted Russia's claims, telling CNBC that they were an attempt to distract people from its alliance with Syrian President Bashar Assad's regime.

"This is another example of the Russian disinformation campaign to distract attention from their moral complicity to the Assad Regime's atrocities and the civilian carnage in western Syria," Eric Pahon, Pentagon spokesman, told CNBC via email on Wednesday.

"The claims … regarding our target selection are absurd, as is the rest of the (TASS) article. On the Tomahawk, we have seen no proof, other than statements made to Russian state-owned media, that their claims are true. This is likely another smoke screen of propaganda to distract from the real issue at hand — the murder of innocent civilians by a murderous regime propped up by Russian backing," he said.

Tomahawk missiles are, their maker Raytheon says, "modern, mature, powerful" and can "can circle for hours, shift course instantly on command and beam a picture of its target to controllers halfway around the world before striking with pinpoint accuracy."

Raytheon notes that Tomahawks can be launched from a ship or submarine and can fly into heavily defended airspace more than 1,000 miles away "to conduct precise strikes on high-value targets with minimal collateral damage. Launching the weapon from such a long distance helps to keep sailors out of harm's way."

It notes that the U.S. and allied militaries have used Tomahawk missiles more than 2,000 times in combat, and flight-tested them 500 times. In April 2017, U.S. Navy destroyers launched 59 Tomahawk cruise missiles at targets on a Syrian air base, it said.

A U.S. Department of Defense press briefing on April 14 — the date the U.S. and its allies launched an airstrike on Syrian government bases in retaliation for a suspected chemical weapons attack carried out by the Syrian regime, an ally of Russia – confirmed the use of multiple Tomahawk missiles in the airstrikes.

What Russia will learn from the Tomahawk missile is uncertain given that it has recently boasted of developing state-of-the-art missiles itself. Only in March, Russian President Vladimir Putin unveiled what he called a state-of-the-art slew of new defense systems. This included a new prototype missile that "can reach any point in the world" and a supersonic weapon that cannot be tracked by anti-missile systems.