President Donald Trump's long-time lawyer Michael Cohen has been telling pals he expects to be arrested soon, according to new reports Tuesday.

A Vanity Fair article also quoted an ex-White House official saying that "Trump should be super worried about Michael Cohen" deciding to cooperate with federal prosecutors against the president.

"If anyone can blow up Trump, it's him," the source told Vanity Fair about Cohen, who is under criminal investigation by federal prosecutors in New York City.

Both Vanity Fair and the New York Daily News cited sources as saying Cohen has told friends he believes his arrest is imminent. 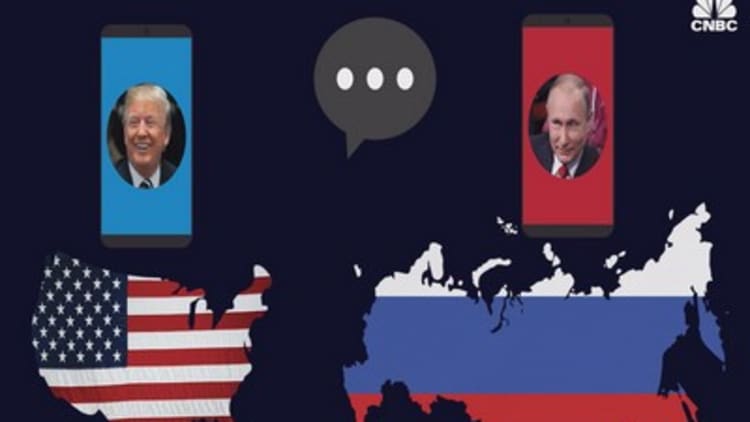 Cohen told Vanity Fair in a text message, "Your alleged source is wrong!"

The stories about Cohen were published a day after a key deadline — without any action by either Cohen or Trump — for objections to be raised about files seized from Cohen in April by the FBI.

A legal source told CNBC that the failure of either Cohen or Trump to make any objections suggests they fear the public disclosure of "devastating" facts contained in a handful of files.

Cohen, 51, has not been charged with any crimes. Neither his lawyer Stephen Ryan nor the White House immediately responded to requests for comments.

A question of privilege

Files related to Daniels were among those seized in the FBI's April 9 raids on Cohen's Manhattan home and office and the hotel room where he had been staying.

On the heels of those raids, Cohen, Trump and the Trump Organization asked federal Judge Kimba Wood to prevent prosecutors from having the files reviewed by a so-called taint team.

That team, composed of prosecutors unconnected to Cohen's case, would have reviewed his files and withheld items protected by attorney-client privilege from the prosecutors investigating him.

Such privilege normally precludes information related to it being used against a person who had the privilege.

Wood agreed to appoint a former federal judge, Barbara Jones, as a special master for Cohen's case. Jones and her own team have been reviewing the seized files, while at the same time lawyers for Cohen and Trump have been looking at them for the purpose of raising claims of privilege.

Last week, Jones said that out of more than 639 items consisting of more than 12,500 pages that she had reviewed, she agreed that 14 items are privileged or partially privileged.

Jones also said that she found that three items flagged by Cohen and Trump's lawyers "are not" privileged.

Wood had given attorneys for Cohen and Trump until Monday to raise any objections they had to Jones' findings. She later rejected their request to be allowed to file their objections under seal.

As of Tuesday afternoon, no objections had been made to Jones' determinations about privilege.

A lawyer unconnected to the case speculated that "the facts they would have had to disclose to make those arguments were so devastating that they chose to forego the opportunity to prevent the documents from being turned over to prosecutors."

"They may have wanted to argue that the Special Master's ruling against them on the privilege issue on three specific documents was incorrect because she improperly held that the crime-fraud exception applied to those documents," the lawyer said.

The lawyer was referring to the exception to attorney-client privilege that occurs when a person and their lawyer are discussing committing or covering up a crime.

"In order to make that argument, however, they would have had to disclose information about the underlying crime and why the crime-fraud exception didn't apply," the lawyer said. "And that was a disclosure they didn't want to make public."