For sophisticated bond market investors, no three words invoke more fear and debate than “inverted yield curve.” But many individual investors don't understand inversion and why a healthy fixed-income market is so critical to their financial wellbeing.

Articles about the risk of an inverted yield curve are popping up all over the place now and the overwhelming majority of those articles paint a pretty dire picture for the economy.

President Donald Trump (R) introduces his nominee for the chairman of the Federal Reserve Jerome Powell during a press event in the Rose Garden at the White House, November 2, 2017 in Washington, DC.
Drew Angerer | Getty Images

Should you be concerned? You should be concerned enough to make sure you understand what it is. So here is a quick summary:

That may sound technical, the kind of market jargon that is for "chart traders." But this negative yield curve is huge for all investors because it is connected to risk of recession. A normal yield curve with the two-year offering a lower yield than the 10-year is fundamental to how banks make money. Banks borrow short term, at lower interest rates, so that they can make long-term loans to borrowers at higher interest rates. The difference between those two interest rates, the positive spread, is their profit. But if a bank is borrowing short term at a high interest rate, and making loans to borrowers at a low interest rate, the difference is a negative spread.

The last seven out of seven times the yield curve went negative since the 1960s, a recession followed.

In this interest-rate environment, banks would lose money by making loans. Not necessarily on all loans, but it does make some loans unfeasible and some less profitable, forcing banks to cut back on making loans; thereby choking off the access to credit markets that businesses need to grow. When it becomes harder for businesses to borrow, many businesses cancel or delay projects and hiring. Weaker businesses go out of business because they lose access to credit, which in turn causes layoffs. When this happens, it takes about a year, on average, for the U.S. economy to slip into a recession.

The last seven out of seven times the yield curve went negative since the 1960s, a recession followed.

Many market pundits believe that the history of a flattening or negative yield curve is not relevant in today's world of massive central bank intervention, encouraging foreign investors to scoop up long term U.S. treasuries because their home-country government bond yields are much lower. But to believe that "it's different this time" means you'd have to believe that the bank sector math in the above example stopped working. Last I checked, banks still borrow at short-term rates and lend at long-term rates, as long as it is profitable. In other words, central bank-induced market distortions do not change the basics of the banker’s math I described above.

3 steps that could stop the inversion

Right now, the yield curve is just about flat, with a slightly positive slope and a spread of just 0.25 percent. What could stop the collision course between short- and long-term interest rates? Three things:

1. The Federal Reserve could stop raising short-term rates. Based on recent comments from Fed chairman Jerome Powell, this looks unlikely. But a curve ball was thrown into the bond market on Thursday when President Trump came out swinging against the Fed and said he was "not thrilled" about rising interest rates, though the White House later said in a statement that the president has no intention of interfering with the Fed's independence. The president hit the Fed again on Friday morning in a tweet saying that "tightening now hurts all that we have done." Trump was not the only prominent figure questioning the Fed's stance with a former Dallas Fed vice president calling it "very aggressive."

2. Investors could lose their appetite for holding onto their existing supply of Treasuries. It seemed like this was starting to happen last February, but that moment came and went, sending the 10-year back below three percent.

3. The Fed could unload a slug of Treasury securities from its balance sheet onto the open market. This is controversial because once it happens, investors will lose faith in the Fed's ability to stop doing it, which would send long-term interest rates substantially higher. Plus, investor expectations that the Fed would go very slow in unwinding its massive balance sheet are such that it would take a massive hit to its credibility. 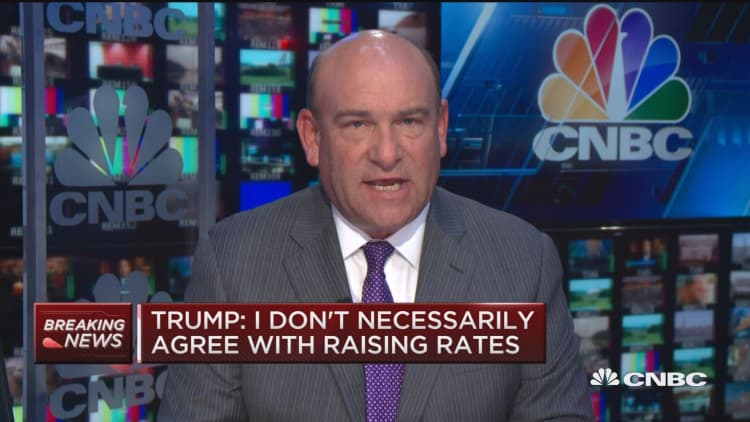 This is financial markets “inside baseball” but yield curve analysis is as important to individual investors saving for retirement as it is to large institutions, if in different ways. These two types of investors have investment objectives that are different and that need to be distinguished.

An institutional investor, like a large pension or endowment plan, is aiming for a certain and consistent risk-adjusted return in order to pay out pensioners a promised amount over their lifetime. Short-term volatility in its returns is something that the pension manager is trying to smooth out. So the debate unfolding in the media about the yield curve and between multi-billion dollar portfolio managers is getting pretty intense. They may be under pressure to make big adjustments to their portfolios.

For the individual retail investor, the goals are different. It must be an acceptable risk that recessions and the bear markets that are associated with them will happen many times over the course of one’s lifetime. This is exactly why risk tolerance needs to be adjusted lower as one ages. Your investment portfolio should take into account how many working years you have left, if any, and you should adjust your asset allocation. Or at least use this moment of inverted yield curve debate to catch up.

Controlling your own risk of market complacency

You can't control whether or not the yield curve inverts, all you can do is control your own potential for market complacency. I think it is time for a gut check. In accounts I manage, I’m still mostly in stocks but I am changing sector exposures to be more defensive. But if you’re not inclined to invest like a portfolio manager, then the best you can do is to rebalance according to your risk tolerance.

Last February, stocks got slammed and investors were nervous. They should take that as a reminder that when markets change direction, they can do it fast. Don’t just rebalance as a function of the gains particular sectors have made, also do it according to age, and the fact that you and many other investors are 10 years older since the Great Recession. Otherwise, you may be rebalancing into a portfolio that is still too aggressive.

We’re in the beer muscles phase of the bull market. Everyone is braver than they should be. That’s what overconfidence does. The better investors do, the more they think they are taking less risk, even though the opposite is often true. And it only makes matters worse when they don't understand complex relationships like the spread between short and long-term bonds. What sounds like it is only for the technical analysts will without exception still whipsaw every unprepared portfolio.