Trump said Tuesday he fired national security advisor John Bolton, saying on Twitter he had "disagreed strongly with many of his suggestions."

"I informed John Bolton last night that his services are no longer needed at the White House. I disagreed strongly with many of his suggestions, as did others in the Administration, and therefore I asked John for his resignation, which was given to me this morning," Trump said in a tweet. 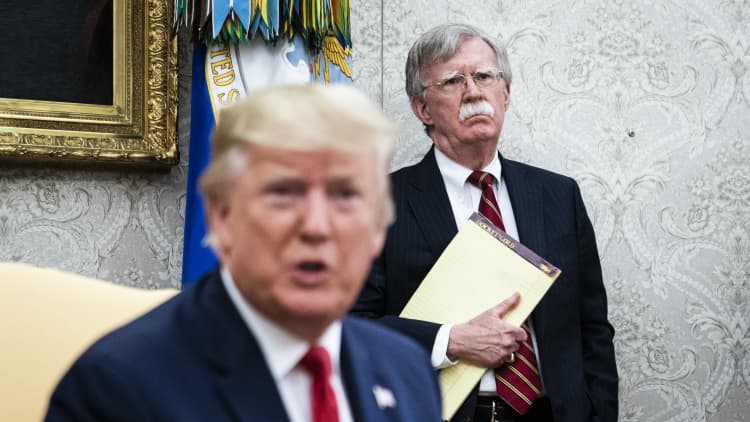 But minutes later, Bolton in his own tweet said that he "offered to resign" Monday night, and that Trump told him, "Let's talk about it tomorrow.

While Bolton's exit stunned Washington, it also weighed on markets as his removal "dials back fears of an attack on Iran," John Kilduff of Again Capital told CNBC.

Before Trump's announcement, oil markets were headed higher on Tuesday toward its longest run of gains since late July.

The commodity had been rising on the updated outlook from Prince Abdulaziz bin Salman, Saudi Arabia's new energy minister and a long-time member of the Saudi delegation to the Organization of the Petroleum Exporting Countries (OPEC). Prince Abdulaziz said the kingdom's policy would not change and a global deal to cut oil production by 1.2 million barrels per day would be maintained.

He added that the so-called OPEC+ alliance, made up of OPEC and non-OPEC producers including Russia, would be in place for the long term.

"It will be interesting to see if we get any hint from him whether the producer group in general and Saudi Arabia in particular sees the need for deeper production cuts."

The OPEC+ joint ministerial monitoring committee (JMMC), which reports on compliance with the cuts, is due to meet on Thursday in Abu Dhabi.

There have been concerns about producers' adherence to the agreement as OPEC members Iraq and Nigeria, among others, exceeded their quota in August and Russia also did not fully comply.

"Markets will need to see concrete progress on the production front, even as the world's economy slows, to sustain gains," said Jeffrey Halley, senior market analyst at OANDA.

"Our oil supply-demand outlook for 2020 calls for additional OPEC production cuts to keep inventories near normal," Goldman analysts wrote in a note.

In the United States, crude stockpiles are likely to have fallen for a fourth consecutive week last week, a preliminary Reuters poll showed on Monday.

Five analysts polled by Reuters estimated, on average, that crude inventories fell 2.6 million barrels in the week to Sept 6.