Cleveland Cavaliers' five-time NBA All-Star player Kevin Love hit a wall two years ago in the middle of a game against the Atlanta Hawks.

His heart was racing, he couldn't think, the room was spinning, he recalled in an essay for The Players' Tribune.

"It was like my body was trying to say to me, You're about to die. I ended up on the floor in the training room, lying on my back, trying to get enough air to breathe," Love wrote. He was taken to a hospital in the third quarter, but the doctors said he was fine.

That 2017 panic attack, as well as Love's own public discussion of his struggles with anxiety and depression, helped prompt the NBA players' association to sketch out a new framework last season to help professional basketball players struggling with the pressures of the game and mental health issues.

With the regular season opening on Oct. 22, the National Basketball Association adopted new rules last month and hosted a mandatory health and wellness meeting for team executives and mental health and wellness providers in Chicago last week, setting formal requirements for all 30 teams, according to Jamila Wideman, NBA vice president of player development.

"I think this meeting itself represents an opportunity for teams to share out and gradually build a collection of best practice so that the rising tide of this all shifts," Wideman said of the Sept. 12 meeting. "What we're seeing is teams willing to embrace, sort of holistically, the question of how do we do better, how do we do more for everyone?"

The league adopted new rules that require teams to add at least one full-time licensed mental health professional — a psychologist or behavioral therapist — to their full-time staff. Teams will also be required, starting this season, to retain a licensed psychiatrist to assist when needed.

They'll also have to have a "written action plan" in the event of mental health emergencies, and they must inform players and staff members how the team will ensure privacy and confidentiality of mental health matters.

The new rules come after recent disclosures by Love and other players about their mental health battles — before and during their NBA careers.

Players' struggles with mental health are not a recent phenomenon. In July, 2012 first-round draft pick Royce White told the New York Post he was blackballed from the league after disclosing his fear of flying and other anxiety issues seven years ago. He's called on the NBA to put a better system in place.

"What strikes me is that they're truly unhappy,'' Silver said of NBA players at the Sloan Conference in Boston. "A lot of these young men are genuinely unhappy.''

It's those comments and stories that Wideman credits to furthering the conversation on the issue.

"I would point back to the way that many players have begun to tell their stories and I think that alone is a hand that is reaching out, and I think [what] we're trying to do at the league is to embrace that," said Wideman.

The new guidelines are the most significant steps the NBA has taken in mental health. The National Basketball Players Association in May 2018 announced its own mental health and wellness program headed by psychologist William D. Parham with Dooling serving as the program's Player Wellness Counselor.

That program connects players with licensed mental health professionals in every city where there's an NBA team. Those professionals are separate from the NBA and the players association. Other resources the player association provides include a players-only website with a focus on mental health that features up to 90 links about issues including depression and all kinds of phobias. 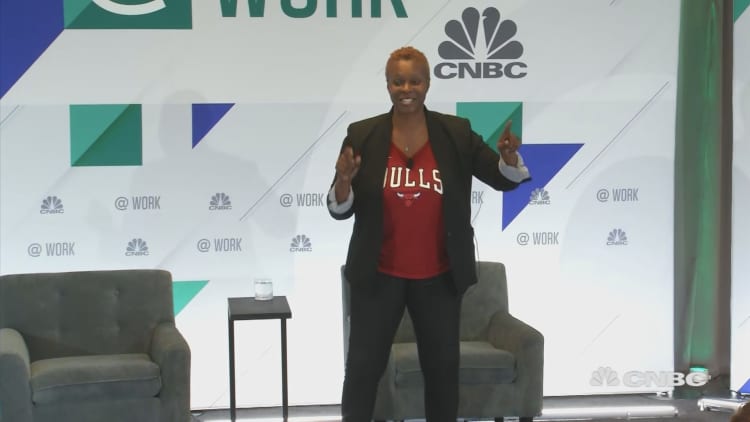 "Our goal is to really make sure the players are well informed. Players really do understand the reality of the business of basketball," Parham said in an interview.

"They do understand that the average career for ballers in the league is about four to five years. They understand the ups and downs of the journey as a professional athlete."

Professional basketball players can face a gamut of potential mental health issues, he said. Some players are able to balance the demands of the game and intense scrutiny as a celebrity with their personal lives fairly well, while others can have some difficulty managing the tough travel schedules and pressure to perform along with demands at home. It can be overwhelming, he said.

Like many people struggling with mental health issues, some players are still trying to come to terms with their childhood trauma, referred to by Parham as "invisible tattoos" because of their unseen but significant effect on people.

"Therapy is a proven way of getting to a better space," he said, adding that giving players the tools and education to better understand their situation is also important. Helping players develop and appreciate the value of maintaining a healthy support system of family and friends is equally important. He also stresses that the quality of company a player keeps can make a big difference.

He gives players mantras to recite to help remind them of what their goal is for the day so they can keep moving forward.

"One mantra I use and invite players to consider is: I'd much rather you have four quarters than 100 pennies. They both add up to a buck but the quarter is 25 times more valuable than a penny," Parham said.

The league is hoping the new guidelines help players open up and destigmatize conversations around mental health.

Other leagues have also begun to adopt measures to help their players deal with mental health issues. In May, the NFL and its players' union established a mental health and wellness committee as well as a joint pain management committee.

For basketball fans, Parham hopes the conversations around mental health issues and players will give them a better understanding and deeper respect of the athletes they cheer for on the court.

"What I really want the casual fan to see is that the phenomenal talent that they're witnessing is exceptional on its own," he said, "and if they knew the backstory of some of these players — the actual story — what they think and are seeing as phenomenal talent will become exponentially more phenomenal if they really understand what that particular player is dealing with as a human being."