Sen. Elizabeth Warren has vowed to break up big technology companies such as Google, Facebook and Amazon if she becomes president.

Even so, a growing contingent of Democratic donors in Silicon Valley, where many of these behemoth tech companies are located, are looking to support Warren's 2020 campaign.

A series of interviews with some of California's most successful investors reveal that the Democrat from Massachusetts is connecting with these techies through her myriad policy proposals. What's more, they are beginning to believe she may be the best candidate to defeat President Donald Trump. With her continued surge in the polls, they are starting to acknowledge that their preferred candidate, former Vice President Joe Biden, may not end up being the nominee.

The decision by these donors to start falling in line behind Warren comes as other primary participants are trying to gain their support. Biden, Sen. Kamala Harris, D-Calif., and South Bend, Indiana, Mayor Pete Buttigieg have been regular visitors to the Bay Area for high-dollar fundraisers.

Meanwhile, Warren has sworn off taking part in big-money events in the primary and has vowed to not be swayed by wealthy business leaders. Her campaign put up a giant billboard in the heart of Silicon Valley calling for the breakup of Big Tech.

Silicon Valley's warming to Warren comes as Wall Street Democrats on the opposite side of the country are threatening to sit out the election or even back Trump if she becomes the nominee.

A spokesperson for the Warren campaign did not respond to a request for comment.

'She seems on it and has a plan'

"I think people are begrudgingly coming around to admit that she's the best answer because Bernie [Sanders] is crazy. The guy they thought they were going to get in Joe Biden is looking like an old man, and I think they are looking around and wondering who else is there," said a California based money manager who spoke on the condition of anonymity. "She seems pretty sharp. She knows the drill in Washington. She seems on it and has a plan."

Warren's plan to break up the leading technology corporations argues that they have too much power and an unfair advantage over their smaller competitors.

"Today's big tech companies have too much power — too much power over our economy, our society, and our democracy," she said in a Medium post in March. "They've bulldozed competition, used our private information for profit, and tilted the playing field against everyone else. That's why my administration will make big, structural changes to the tech sector to promote more competition — including breaking up Amazon, Facebook, and Google," she added.

This growing contingent of tech insiders looking to back Warren started to take shape in the second quarter when she raised at least $19 million. At that time, she saw two contributions from Chamath Palihapitiya, a Silicon Valley based venture capitalist, a $2,800 donation from investor and former Shark Tank star Chris Sacca and a $2,500 contribution from John MacFarlane, the founder of audio company Sonos Inc. Warren has yet to announce how much she raised in the third quarter.

Palihapitiya, also a partial owner of the Golden State Warriors, said in an email that the growing support for Warren comes down to her being the equivalent to Trump on the progressive side of the political spectrum, but more policy focused. He contributed $5,000 to Warren's campaign in the second quarter.

"The truth is that most of the U.S. hasn't participated in the financial gains of Wall St. or Silicon Valley. In that, [there] is a lot of frustration about systems led by groups of insiders," Palihapitiya said. "Trump was the populist right's reaction to this. Warren is the left's. The difference between the two is that Warren is more disciplined, policy-focused and detail oriented than Trump. She is Trump's greatest threat to reelection."

Executives in at least one of the tech giants took issue with Warren's proposal. At a meeting in July, Facebook's founder and CEO Mark Zuckerberg railed that if she tried to disband his company, it will put up a fight.

"I mean, if she [Warren] gets elected president, then I would bet that we will have a legal challenge, and I would bet that we will win the legal challenge," Zuckerberg said, according to an audio recording of the meeting, first obtained by The Verge. "And does that still suck for us? Yeah. I mean, I don't want to have a major lawsuit against our own government," he added.

Warren responded to Zuckerberg on Twitter, calling for a fix to a system she calls "corrupt" and one that "lets giant companies like Facebook engage in illegal anti-competitive practices, stomp on consumer privacy rights, and repeatedly fumble their responsibility to protect our democracy." Meanwhile, her campaign has spent $1.4 million on Facebook ads since July.

While Warren has championed rolling back recent acquisitions from some of the largest technology companies including Facebook, Google and Amazon, she'd likely have to operate in divided government if she wins her party's nomination and the 2020 election, assuming Republicans hold on to control of the Senate, said Frank Aquila, a corporate law partner at Sullivan & Cromwell. That may limit the amount of change she can realistically hope to accomplish, he said.

Sources briefed by executives at Microsoft and Amazon, two of the world's largest companies by market value, have said they are wary of large deals to avoid the bulls-eye of the administration.

Inbound and outbound business activity with China has come to a near standstill as the Trump administration has pushed tariffs and cast doubt on the safety of data and information with Chinese companies.

Business leaders are clamoring for clarity on policy, even more than the policies themselves, as the 2020 election gets closer, said Aquila.

"What business is looking for is a period of stability and calm," Aquila said. "It's less a partisan issue and more about bringing economic conditions that allow businesses to focus on business instead of wondering about the political world every two minutes. Many CFOs have told me over the years, 'I can deal with higher tax rates or lower tax rates. I just need to know what the tax rate will be.'"

Silicon Valley afraid of its own dominance

An aide to a startup investor who has donated to Warren's campaign, along with many others running for president, said Silicon Valley contributors may organize small dollar fundraisers for her in the Bay Area and insisted that their support comes from the idea that Silicon Valley is not all in favor of Big Tech's dominance.

"Most of SV [Silicon Valley] doesn't work for Big Tech and a lot of Big Tech employees have values contrary to their employees," this aide said, later pointing to the walkout that took place at Google offices around the world in November. "SV venerates competence, vision, disruption and they see those qualities in Warren."

Employees from Alphabet Inc., Google's holding company, have combined to give Warren just over $126,000 since she officially entered the race in February, according to the nonpartisan Center for Responsive Politics. Google employees have given up approximately $32,000, according to Federal Election Commission records.

An advisor to one of California's bundlers who's supporting a rival campaign, admitted their network has taken notice of rank and file employees at these larger tech companies donating to Warren. This consultant said they believe these donations are flowing due to Warren's ability to connect with employees who believe the tech giants have become too powerful and that she's the best bet to beat Trump.

"They see it up close and personal and are even victims of some of its problems. Plus they're just plain progressive and can't stand Trump," the advisor explained. 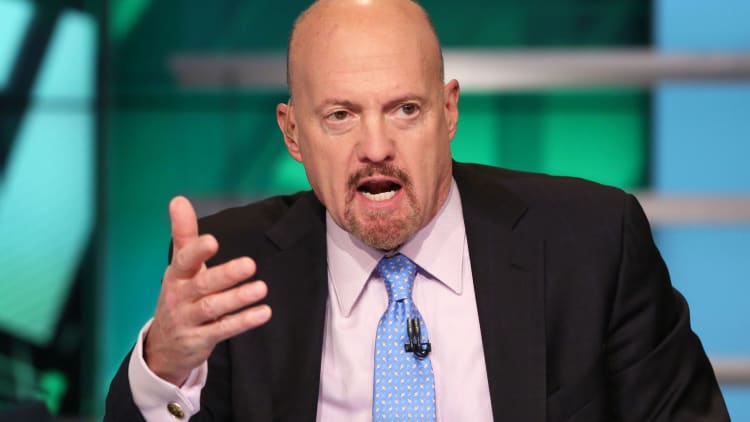 watch now
VIDEO2:5402:54
Jim Cramer: I want to stop the fear of Senator Warren
Squawk on the Street