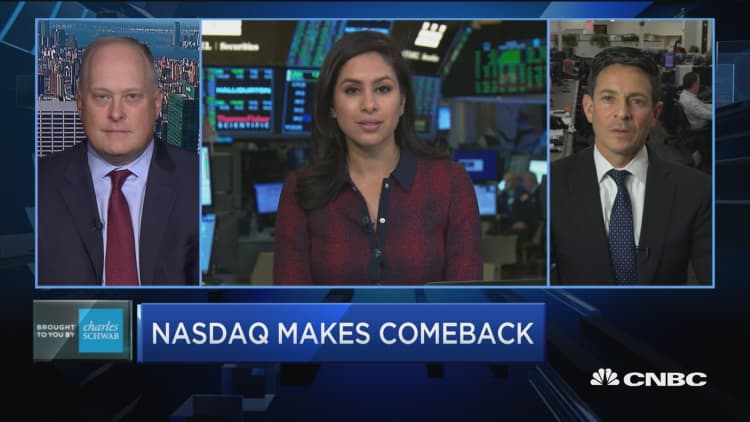 The Nasdaq roared back from its two-day sell-off, but a handful of its biggest names are showing signs of strain.

"If there was one company that we would be buying and that we've owned for many years, that would be Cisco Systems. That one has a P-E multiple of 15 times and enterprise value to EBIT of roughly about 12 times," Morganlander said on CNBC's "Trading Nation" on Tuesday.

"We believe that even with an embedded growth rate of 2% or 3% over the long run, you can get a favorable return. That also has a dividend yield of roughly about 2.9%," said Morganlander.

Cisco has come under pressure in the past week as the rest of the market sold off. Shares are down 2% since last Wednesday, a steeper decline than the S&P 500's 1% drop.

"Take a look at the chart of Netflix," Johnson said during the same segment. "We chose it number one because they've already reported earnings, so if you're looking to de-risk some of your tech names, this will be one of them."

Netflix reported better-than-expected earnings and sales when it posted results last week — guidance came in weaker than consensus. The stock has risen 3% since that report.

"Second, the technical setup looks interesting — the shares are moving above their 50- and 200-day moving average. You're clearing support at $340. It looks like the stock has got about 10% or more upside back to that $385 level, and that's a name that we could be buying in here at this point," Johnson added.