Walmart is turning four of its stores into laboratories that test ways to turn the retailer's huge physical footprint into a more powerful edge for e-commerce.

The big-box giant said Thursday that it's designating two stores near its headquarters in Bentonville, Arkansas, and two others that will be announced later. It said the stores and their employees will try out approaches that better blend the brick-and-mortar and digital sides of the business and improve the experience for customers.

Walmart, like other retailers, has seen more of its sales shift online during the coronavirus pandemic. Walmart's e-commerce sales nearly doubled in the second quarter ended July 31. Yet even before the global health crisis, the company focused on using its numerous stores as an advantage over Amazon and other competitors.

For this new effort, employees will use digital tools, store design features and different strategies that could speed up restocking shelves and fulfilling online orders. They will test an app that uses augmented reality to scan multiple boxes in the back room rather than one at a time as they move them to the store floor. They will use new store signage and handheld devices to cut down the time it takes to pick an online order. And product and technology teams will be based at the stores to accelerate the pace of prototyping.

Walmart will also try to better sync up its apparel assortment at the test stores. Some apparel is not currently listed online. If the store and the website have the same shirts or sweaters, customers have more ways to get those goods — such as retrieving them through curbside pickup or having them shipped to the home.

The company said it will tinker with the checkout area, too, testing designs, hardware and software that make customers' purchases faster, easier and more contact-free.

John Crecelius, Walmart's senior vice president of associate product and next generation stores in the U.S., said in a post on the company's website that simple changes can pay off. For example, he said, the percentage of times that employees picking an online order find the item on their first attempt has gone up by 20% in some of its tricky merchandise categories when it's added the signage and handheld devices. The signage was inspired by airport terminals, with a letter and a number.

He said Walmart will announce more ways it will use its stores to drive online growth.

Walmart has more than 4,700 stores in the U.S. More than 90% of Americans live within 10 miles of one of its stores. That can make them convenient hubs for fulfilling online orders for curbside pickup or delivery. 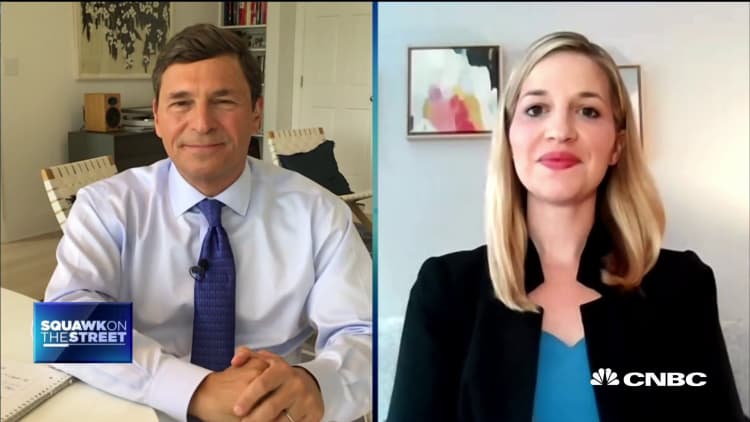 watch now
VIDEO2:4202:42
Here's why Walmart+ membership program is being compared to Amazon
Squawk on the Street