Simon Property Group was asked this past weekend to close its Cielo Vista Mall in El Paso, Texas, again, as Covid-19 cases in the area are on the rise, Chief Executive David Simon said Monday.

On Oct. 7, the biggest mall owner in America had finally reopened all of its properties that had been forced to shut due to the pandemic, the company said. The last to reopen was in Los Angeles county. But, with the closure of Cielo Vista, another round of shutdowns could be looming.

Outside of this closure, Simon said all its U.S. malls and outlet centers are reopen, and traffic continues to improve each month.

El Paso County announced at the end of October that it would shutter all nonessential businesses for two weeks in an effort to curb the recent rise of Covid-19 cases, which has been overwhelming local hospitals.

The United States topped 10 million coronavirus cases Monday, as global cases surpassed 50 million. And the country is setting record one-day spikes in cases, spurring some officials to reinstate restrictions in an effort to contain the virus.

"That's the only one," so far, Simon said about the Cielo Vista Mall, the largest mall in El Paso. "I think enclosed malls are being treated unfairly and inconsistently. ... The level of inconsistency is very frustrating."

"I don't know if further restrictions will be in order," the CEO added, when asked about the possibility of other malls in other states being forced to close. "We have yet to see any evidence that our environment spreads anything."

Simon shares closed Monday up nearly 28%, amid a broader market rally. The stock has fallen about 47% in 2020, bringing its market cap to $24.2 billion.

But shares were down about 5% in extended trading, after the company released disappointing third-quarter results. Total revenue fell 25% to $1.06 billion from $1.42 billion a year earlier. Analysts were calling for $1.08 billion, according to Refinitiv estimates.

Simon said the occupancy rate at its properties, which include the Roosevelt Field Mall in New York and the King of Prussia mall in Pennsylvania, was 91.4% as of Sept. 30, compared with 94.7% during the same period in 2019.

Some of the biggest tenants in Simon's portfolio, based on how much rent they pay, include Gap, L Brands, Macy's and J.C. Penney. Earlier this year, Simon took Gap to court for not paying rent during the pandemic.

As of Nov. 6, Simon has collected 85% of its billed rents for the third quarter, compared with 72% of billed rents collected at its U.S. properties during the second quarter.

With Brookfield, Simon is in contract to acquire most of Penney's assets, including its real estate, out of bankruptcy court. Simon previously acquired two retailers, Brooks Brothers and Lucky Brand, out of bankruptcy earlier this year, with the help of the apparel-licensing firm Authentic Brands Group.

"The company has a loyal, diverse and inclusive customer base ... and we expect we will continue to grow this customer [base] over time," CEO Simon said Monday about the Penney deal, which has not yet closed.

Simon ended the third quarter with more than $9.7 billion of liquidity on its balance sheet, including $1.5 billion of cash on hand, and $8.2 billion of available capacity under its revolving credit facility and term loan. 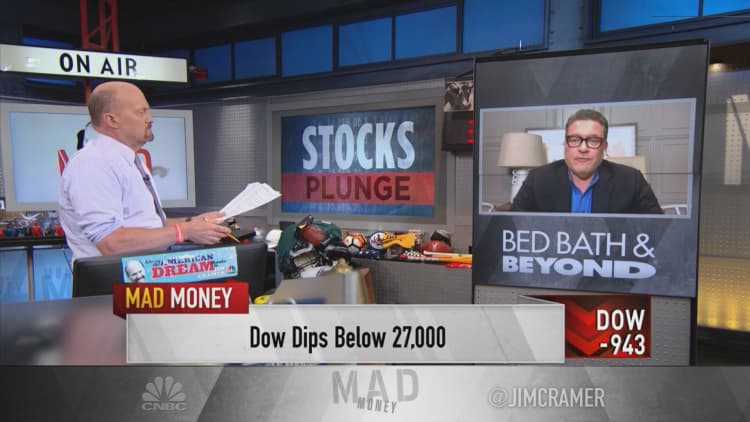 watch now
VIDEO2:0702:07
Bed Bath & Beyond says omni-channel strategy is the 'magic for us in Q3'
Mad Money with Jim Cramer