SpaceX won $885.5 million in the FCC's $9.2 billion auction, or about a tenth of the funds awarded to 180 companies. Known as the "Phase I auction" of the FCC's $20.4 billion Rural Digital Opportunities Fund, the subsidies are designed to be an incentive for broadband providers to bring service to the "unserved" and hard-to-reach areas of the United States.

The subsidies will "be distributed over the next 10 years," the FCC said, in the form of "equal monthly payments" – so long as each provider "meets all deployment milestones" for bringing broadband service to the areas bid and won.

"Funds will be distributed when applicants complete the long form application process and are authorized to receive support," FCC spokesperson Anne Veigle said in a statement to CNBC.

Notably, the FCC was expected to award $16 billion in the first auction, but ended up doling out $9.2 billion. The agency said it will roll over the remaining $6.8 billion into the planned "Phase II auction," which now has an $11.2 budget that will target "partially-served areas."

Starlink is SpaceX's plan to build an interconnected internet network with thousands of satellites, designed to deliver high-speed internet to anywhere on the planet. In October the company began a public beta test of Starlink, with service priced at $99 a month.

Additionally, SpaceX won subsidies to bring service to customers in 35 U.S. states, with 642,925 locations awarded to the company.

"This is great for SpaceX because now they have an anchor customer," Quilty Analytics senior analyst Caleb Henry told CNBC. "Up until this point SpaceX has not announced any major customers ... and [this auction] provides them an assured source of revenue that they can build on as long as they meet the FCC's criteria."

Quilty Analytics is a boutique research and investment firm focused on the satellite communications sector, which founder Chris Quilty established after leading Raymond James' coverage of the space industry for 20 years.

"I think it speaks to the confidence that the FCC has in SpaceX that, of all the satellite providers that competed for this program, SpaceX alone showed that they could provide high capacity service and minimal signal lag and do that in a rapid way," Henry added.

A Starlink user terminal, which would connect consumers to the company's satellite internet service.
SpaceX

To date, SpaceX has launched nearly 900 Starlink satellites — a fraction of the total needed for global coverage but enough to begin providing service in some areas, including in the northwest United States. The company has begun to work with a handful of organizations in rural regions that Starlink satellites in orbit currently cover, such as Washington state. While SpaceX previously expected to begin offering commercial service in the northern United States and southern Canada" before the end of this year, members of the company's Starlink team on Nov. 22 said that the company is now "planning to move from a limited beta to a wider beta in late January."

The network is an ambitious endeavor, which SpaceX has said will cost about $10 billion or more to build. But the company's leadership estimates that Starlink could bring in as much as $30 billion a year, or more than 10 times the annual revenue of its rocket business.

While SpaceX has yet to name any major customers of Starlink, the company in October announced a partnership with Microsoft to connect the tech giant's Azure cloud computing network to the satellite network. SpaceX and Microsoft in recent months have been testing the software needed to connect Starlink and Azure. The partnership is especially key to Microsoft's new mobile data centers, which the company said are designed "for customers who need cloud computing capabilities in hybrid or challenging environments, including remote areas." 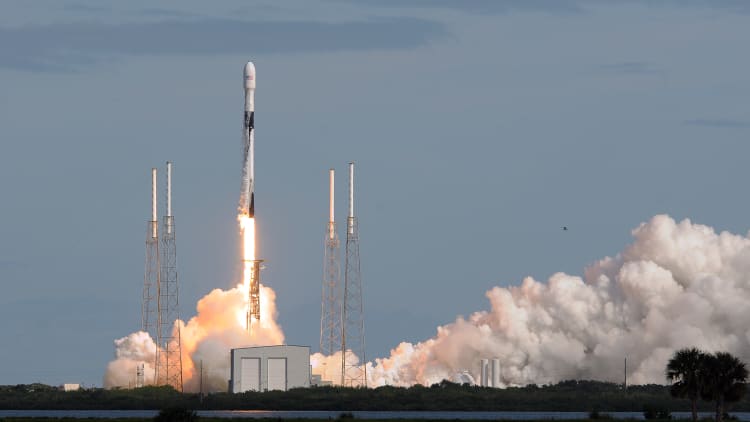