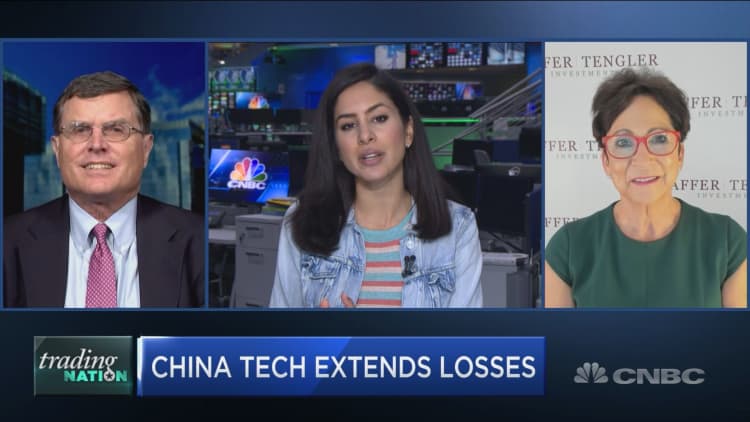 Chinese tech stocks continued their sell-off Tuesday as concerns around regulatory crackdowns lingered, pushing Hong Kong's Hang Seng index down more than 8% since the start of the week.

The popular KraneShares CSI China Internet ETF (KWEB) is down nearly 14% so far this week. Alibaba, its second-largest holding, on Tuesday hit lows not seen since March 2020.

Though the weakening yuan could draw some more money back into the Chinese market, that will likely be temporary, said Tengler, chief investment officer at Laffer Tengler Investments.

"You want to be focused on the areas where the regulators have held back like the chip stocks ... if you really need to be exposed," she said. "If that doesn't work, then you may want to try U.S. companies that have exposure."

While investing via an Apple, Tesla or Starbucks isn't exactly "riskless" considering the regulatory tightening, their revenues from other regions could lessen the blow of a downturn, Tengler said.

Outside of China, she suggested looking to South Korea and Taiwan for tech exposure — her firm has exposure to both and owns Taiwan Semiconductor Manufacturing for its U.S. equity strategy — and to countries that deal in materials such as copper.

It might be worth staying away from China tech stocks altogether, Miller Tabak's Matt Maley said in the same "Trading Nation" interview.

With little visibility on the Chinese government's next move, many institutional investors could steer clear of the trade for the rest of 2021 despite the Shanghai index getting oversold on a relative basis, which can lead to a near-term bounce, the firm's chief market strategist said.

"It broke below its 200-day moving average yesterday and even though it's getting quite oversold, it broke well below that level," Maley said. "So, even if we get a short-term bounce, it's going to have a tough time regaining that level."

That doesn't bode well for the chart in the coming months, the strategist warned.

"I definitely want to stay away from those [stocks] as much as possible for a while. At some point it'll be a great buy, but I think it's way too early for that yet," he said.