Key senators on Wednesday announced they reached a bipartisan infrastructure deal, setting up a potential vote to advance the plan within hours as Majority Leader Chuck Schumer rushes to get it through the chamber.

"We now have an agreement on the major issues," said Sen. Rob Portman of Ohio, the lead GOP negotiator. "We are prepared to move forward."

The Democrat leading her party's infrastructure effort, Sen. Kyrsten Sinema of Arizona, also said "we've got a deal" with "most" of the bill's text completed, according to NBC News. She said she spoke to President Joe Biden, who is "excited to move this forward."

Biden later told reporters he feels "confident" about the agreement.

Schumer, D-N.Y., said he hopes to hold a procedural vote to advance the plan Wednesday night. The measure will need 60 votes to advance, or 10 Republicans if all 50 members of the Democratic caucus back it.

"I believe we have the votes for that," Schumer said.

McConnell gave the measure a big boost later Wednesday, when he said he would vote to proceed with the bill. All told, at least 10 Republicans are expected to vote to move the bill forward, according to Sen. John Thune, the minority whip.

Six other Republican senators, Richard Burr of North Carolina, Lindsey Graham of South Carolina, Jerry Moran of Kansas, Mike Rounds of South Dakota, Thom Tillis of North Carolina and Todd Young of Indiana, backed the framework last month. They and a handful of other GOP lawmakers will shape whether the bill advances in the Senate.

The agreement on infrastructure legislation follows disputes over issues including transit funding that prevented a deal for days. The wrangling threatened to derail a core piece of Biden's agenda.

Senators "continue to make good progress" on both the bipartisan bill and Democrats' separate plan to invest $3.5 trillion in social programs, Schumer said earlier Wednesday. Democrats say both packages will boost the economy and provide a stronger safety net for households.

The infrastructure plan was set to invest $550 billion in new money for transportation, broadband and utilities — down from $579 billion in the initial framework announced last month. It includes, according to a White House fact sheet:

The White House said the bill will be paid for by repurposing unspent coronavirus relief funds, along with what it called "targeted corporate user fees," strengthened "tax enforcement when it comes to crypto currencies" and economic growth created by the investments. It was unclear how those tools would work or how much they would raise.

Schumer failed last week to start debate on the bipartisan plan. The Republican senators working on the bill with Democrats and the White House voted against advancing it as they tried to iron out disagreements.

The Democratic leader aims to pass the bipartisan plan and a budget resolution that would kick-start his party's legislation before the Senate leaves Washington for its recess next month. Using budget reconciliation, Democrats can approve their bill without a Republican vote.

The infrastructure effort got a boost from at least one typically pro-GOP interest group: the U.S. Chamber of Commerce. The organization, which criticized Biden's initial plan to raise the corporate tax rate to fund the investments, said the proposal would boost the economy.

"We now urge the full Senate to vote yes on the cloture motion to proceed to consideration so infrastructure legislation can be approved before the August recess," the chamber's senior vice president of government affairs Jack Howard said. 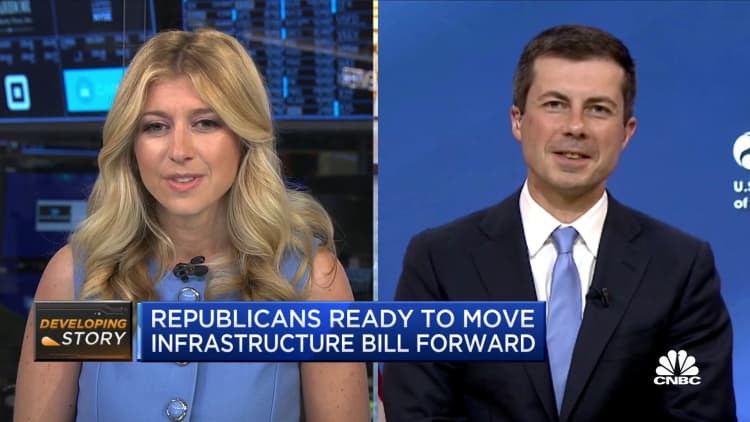 watch now
VIDEO2:4302:43
Buttigieg: "This is a massive investment" in infrastructure
Closing Bell

In touting the agreement Wednesday, Transportation Secretary Pete Buttigieg highlighted its support from both the business and labor communities.

"I'm delighted to see that we've arrived at this because this really will be a historic investment if we can get it through both chambers and onto the president's desk for his signature," he told CNBC's "Closing Bell."

The bipartisan plan would need 60 votes to pass. It means at least 10 Republicans would have to back it if all Democrats sign off, or one more GOP senator would have to vote for it for every Democratic defection.

The vote to advance the bill would start a heavy lift for Democratic congressional leaders. They have to keep disparate wings of their party on board with both plans while navigating efforts by some Republicans to sink them.

House Speaker Nancy Pelosi, D-Calif., has stressed she will not take up either measure until the Senate passes both of them.

Democrats' $3.5 trillion plan is expected to invest in child care, education, health care and efforts to curb climate change. Buttigieg maintained Wednesday that the White House considers the infrastructure and reconciliation plans separate even if Congress passes them together.

"They're separate packages but the president supports them both and expects to sign them both," he said.