AMC Entertainment CEO Adam Aron sold 625,000 shares of the company Tuesday, half of what he ultimately plans to dump under a selling program filed with the Securities and Exchange Commission.

The sale is part of the executive's estate planning, Aron told investors in August. He reiterated those plans during an earnings call with investors and analysts Monday.

The share sale was disclosed on the SEC's website after the bell Wednesday. The stake was sold at an average price of $40.53, giving it a value of about $25 million. 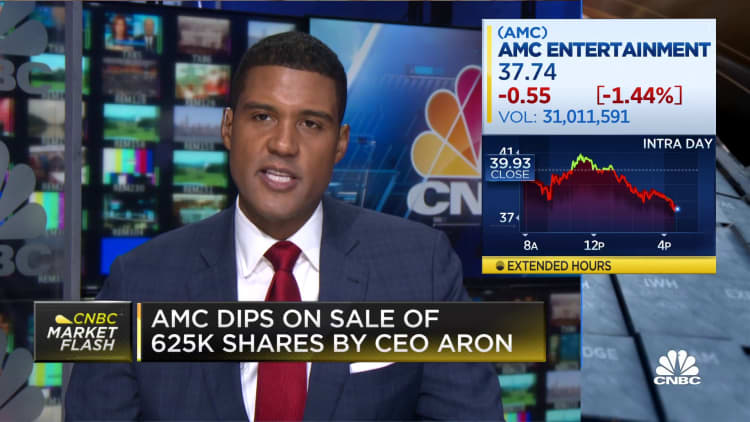 AMC shares fell 4% on Wednesday to close at $38.29 and were down another 3% in after-hours trading.

Earlier in the day, Aron's share plans were disclosed in a separate filing that appeared on a section of the SEC website that displays paper forms submitted via email.

The form gave Aron the right to sell the entire stake of 1.25 million shares now or over the coming days, weeks and months, said Ben Silverman, director of research at InsiderScore.

With the new filing after the bell, investors learned he had already dumped half the stake the day before.

"On our last call, I also pointed out to you that in September of 2021, I would turn 67 years of age — a youthful, vibrant, vigorous full-of-life 67, I might add, but 67 nonetheless," he told investors on the call. "Prudent estate planning suggests I should diversify my assets a bit, especially with Congress having been discussing imposing potentially soaring capital gains tax rates and significant changes to what can be passed on to one's heirs."

Aron once again told investors that during his almost six years with AMC he had never sold any of his stock, save for the 500,000 shares he gifted to his adult children.

"If you do the math, you will see that with this much current and future ownership of AMC, I have an enormous personal stake in the future of our company — of your company — of AMC Entertainment," he said. "I fervently believe in AMC and my interests are very much aligned with our broad shareholder base to care very much about the value of your ongoing investment, and my ongoing investment, in AMC Entertainment stock."

Shares of AMC have soared more then 1,700% this year, buoyed by this year's meme-stock craze.

The movie theater chain was hit hard by the pandemic and nearly filed for bankruptcy in late 2020. However, a surge in its stock allowed it to gain nearly $2 billion in liquidity and steady itself as the box office began to rebound.

watch now
VIDEO0:5800:58
AMC beats top and bottom line in Q3, with a note of caution from CEO
Closing Bell

During the third quarter, the company saw admission revenue rise to $425.1 million from $62.9 million in the year-ago period. Its food and beverage sales also surged to $265.2 million from just $29.1 million on a year-over-year basis.

Still, AMC's operating costs outpaced its revenue, leading the company to post a loss for the quarter. The company said if the domestic box office reaches at least $2 billion during the months of October, November and December, it would be able to post positive cash flow for the fourth quarter.

Correction: This story has been updated to reflect Adam Aron's correct age.