Automakers will likely report sharp sales declines for March and the first quarter, industry analysts say, as an ongoing shortage of new vehicles has left car-shoppers with few – and often expensive – choices.

U.S. auto sales forecasts from Cox Automotive, Edmunds, and J.D. Power/LMC Automotive say that first-quarter sales of cars, pickup trucks and SUVs were likely below 3.3 million, down more than 14% from the first quarter of 2021.

For some automakers, the declines may be even worse. Edmunds expects General Motors, Honda, Nissan, and Volkswagen to report year-over-year sales declines of more than 20% for the first quarter, with Ford faring only slightly better.

But while sales are falling, prices are rising: TrueCar analysts said that the average selling price of a new vehicle in the U.S. likely rose 15.4% in March from a year ago, to nearly $43,500.

Consumer concerns about inflation – including higher gas and vehicle prices – likely played a role in the quarter's projected sales decline, which includes an expected drop of at least 24% in March. But the biggest factor is the thin supply of new vehicles amid a global shortage of semiconductor chips. 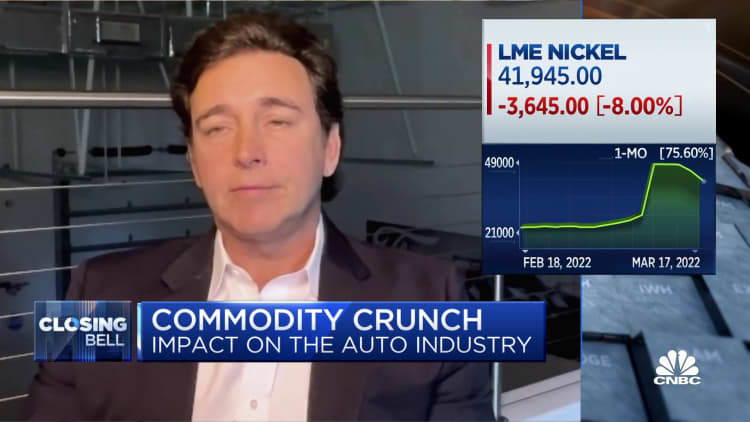 "Skyrocketing gas prices were top of mind for consumers in March, but the lack of inventory is what ultimately depressed new vehicle sales in the first quarter," said Jessica Caldwell, Edmunds' executive director of insights.

Edmunds' forecast calls for a 15.2% year-over-year decline in first-quarter auto sales. The company reported that inventories remain very thin, with just 20 days' supply of gas-powered vehicles and 21 days' worth of electric vehicles available. Automakers typically aim to have enough vehicles in inventory to last 60 to 70 days.

Not only are automakers still grappling with Covid-related supply-chain disruptions, Caldwell noted, they may now be facing additional supply challenges in the wake of Russia's invasion of Ukraine.

U.S. auto sales have traditionally ramped up in March as spring weather arrives in much of the U.S., noted Cox Automotive's senior economist, Charlie Chesborough. He thinks that consumer demand would probably be strong right now – if only automakers had more vehicles to sell.

"Low unemployment, relatively low interest rates — the conditions are right for higher sales," Chesborough said. But, he said, until automakers are able to boost the number of vehicles on dealers' lots, sales will remain weak.

"Make no mistake," he said, "this market is stuck in low gear."