In the U.S. weapons industry, the normal production level for artillery rounds for the 155 millimeter howitzer — a long-range heavy artillery weapon currently used on the battlefields of Ukraine — is about 30,000 rounds per year in peacetime.

That's according to Dave Des Roches, an associate professor and senior military fellow at the U.S. National Defense University. And he's worried.

"I'm greatly concerned. Unless we have new production, which takes months to ramp up, we're not going to have the ability to supply the Ukrainians," Des Roches told CNBC.

Europe is running low, too. "The military stocks of most [European NATO] member states have been, I wouldn't say exhausted, but depleted in a high proportion, because we have been providing a lot of capacity to the Ukrainians," Josep Borrell, the EU's high representative for foreign affairs and security policy, said earlier this month.

Military analysts point to a root issue: Western nations have been producing arms at much smaller volumes during peacetime, with governments opting to slim down very expensive manufacturing and only producing weapons as needed. Some of the weapons that are running low are no longer being produced, and highly skilled labor and experience are required for their production — things that have been in short supply across the U.S. manufacturing sector for years.

A US M142 High Mobility Artillery Rocket System (HIMARS) firing salvoes during a military exercise on June 30, 2022. The U.S. Department of Defense has announced that the U.S. will be sending Ukraine another $270 million in security assistance, a package which will include high mobility artillery rocket systems and a significant number of tactical drones.
Fadel Senna | Afp | Getty Images

Indeed, Stoltenberg said during last week's U.N. General Assembly that NATO members need to reinvest in their industrial bases in the arms sector.

"We are now working with industry to increase production of weapons and ammunition," Stoltenberg told The New York Times, adding that countries needed to encourage arms makers to expand their capacity longer term by putting in more weapons orders.

But ramping up defense production is no quick or easy feat.

Is the U.S. ability to defend itself at risk?

The short answer: no.

The U.S. has been by far the largest supplier of military aid to Ukraine in its war with Russia, providing $15.2 billion in weapons packages to date since Moscow invaded its neighbor in late February. Several of the American-made weapons have been game changers for the Ukrainians; particularly the 155 mm howitzers and long-range heavy artillery like the Lockheed Martin-made HIMARS (High Mobility Artillery Rocket System). And the Biden administration has said it will support its ally Ukraine for "as long as it takes" to defeat Russia.

The U.S. has essentially run out of the 155 mm howitzers to give to Ukraine; to send any more, it would have to dip into its own stocks reserved for U.S. military units that use them for training and readiness. But that's a no-go for the Pentagon, military analysts say, meaning the supplies reserved for U.S. operations are highly unlikely to be affected.

We need to put our defense industrial base on a wartime footing. And I don't see any indication that we have.
Dave Des Roches
Senior military fellow, U.S. National Defense University

"There are a number of systems where I think the Department of Defense has reached the levels where it's not willing to provide more of that particular system to Ukraine," said Mark Cancian, a former U.S. Marine Corps colonel and a senior advisor at the Center for Strategic and International Studies.

What this means for Ukrainian forces is that some of their most crucial battlefield equipment – like the 155 mm howitzer – is having to be replaced with older and less optimum weaponry like the 105 mm howitzer, which has a smaller payload and a shorter range.

"And that's a problem for the Ukrainians," Des Roches says, because "range is critical in this war. This is an artillery war."

A boy walks past a graffiti on a wall depicting a Ukrainian serviceman making a shot with a US-made Javelin portable anti-tank missile system, in Kyiv, on July 29, 2022.
Sergei Supinsky | AFP | Getty Images

Other weapons Ukraine relies on that are now classified as "limited" in the U.S. inventory include HIMARS launchers, Javelin missiles, Stinger missiles, the M777 Howitzer and 155 mm ammunition.

The Javelin, produced by Raytheon and Lockheed Martin, has gained an iconic role in Ukraine — the shoulder-fired, precision-guided anti-tank missile has been indispensable in combating Russian tanks. But production in the U.S. is low at a rate of around 800 per year, and Washington has now sent some 8,500 to Ukraine, according to the CSIS — more than a decades' worth of production.

Ukrainian soldiers take pictures of a mural titled 'Saint Javelin' dedicated to the U.S.-made portable surface-to-air missile has been unveiled on the side of a Kyiv apartment block on May 25, 2022 in Kyiv, Ukraine. The artwork by illustrator and artist Chris Shaw is in reference to the Javelin missile donated to Ukrainian troops to battle against the Russian invasion.
Christopher Furlong | Getty Images

President Joe Biden visited a Javelin plant in Alabama in May, saying he would "make sure the United States and our allies can replenish our own stocks of weapons to replace what we've sent to Ukraine." But, he added, "this fight is not going to be cheap."

The Pentagon has ordered hundreds of millions of dollars' worth of new Javelins, but ramping up takes time — the numerous suppliers that provide the chemicals and computer chips for each missile can't all be sufficiently sped up. And hiring, vetting and training people to build the technology also takes time. It could take between one and four years for the U.S. to boost overall weapons production significantly, Cancian said.

"We need to put our defense industrial base on a wartime footing," Des Roches said. "And I don't see any indication that we have." 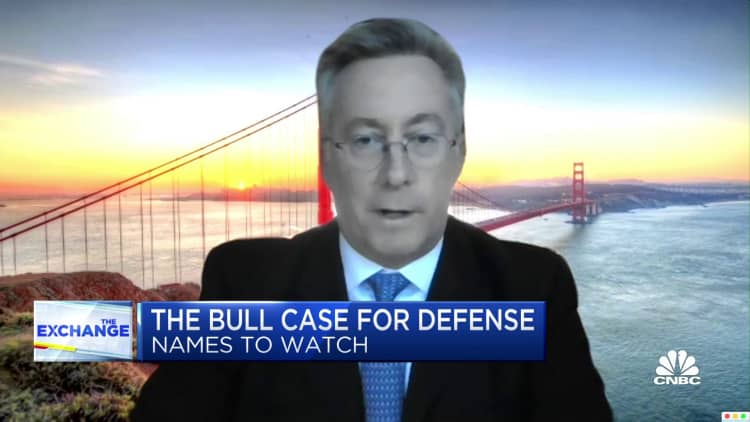 The U.S. Department of Defense disputed the suggestion that the U.S. is running low on its weapons stockpiles for Ukraine.

"The Department has provided a mix of capabilities to Ukraine – we, and they, are not over-reliant on any one system," DOD spokesperson Jessica Maxwell told CNBC in an email. "We have been able to transfer equipment from U.S. stocks to Ukraine while managing risks to military readiness."

The Pentagon is "working with industry to replenish depleted stocks on an accelerated basis," Maxwell said. "This includes providing funding to buy more equipment, set up new production lines, and support additional worker shifts. We still have the necessary inventory for our needs."

The DOD's latest military assistance package, she added, "underscores the lasting nature of our commitment and represents a sustainable, multi-year investment in critical capabilities for Ukraine."

A Lockheed Martin spokesman, when contacted for comment, referenced an April interview during which the company's CEO, Jim Taiclet, told CNBC: "We've got to get our supply chain ramped up, we've got to have some capacity, which we're already investing to do. And then the deliveries happen, say, six, 12, 18 months down the road."

What are Ukraine's options?

In the meantime, Ukraine can look elsewhere for suppliers — for instance South Korea, which has a formidable weapons sector and in August signed a sale to Poland for $5.7 billion worth of tanks and howitzers. Ukrainian forces will also have to work with replacement weapons that are often less optimal.

A Ukrainian serviceman mans a position in a trench on the front line near Avdiivka, Donetsk region on June 18, 2022 amid the Russian invasion of Ukraine.
Anatolii Stepanov | AFP | Getty Images

Jack Watling, an expert on land warfare at the Royal United Services Institute in London, believes there is still ample scope for Ukraine to supply itself with many of the weapons it needs.

"There is sufficient time to resolve that problem before it becomes critical in terms of stepping up manufacture," Watling said, noting that Kyiv can source certain ammunition from countries that don't immediately need theirs, or whose stocks are about to expire.

"So we can continue to supply Ukraine," Watling said, "but there is a point where especially with certain critical natures, the Ukrainians will need to be cautious about their rate of expenditure and where they prioritize those munitions, because there isn't an infinite supply."