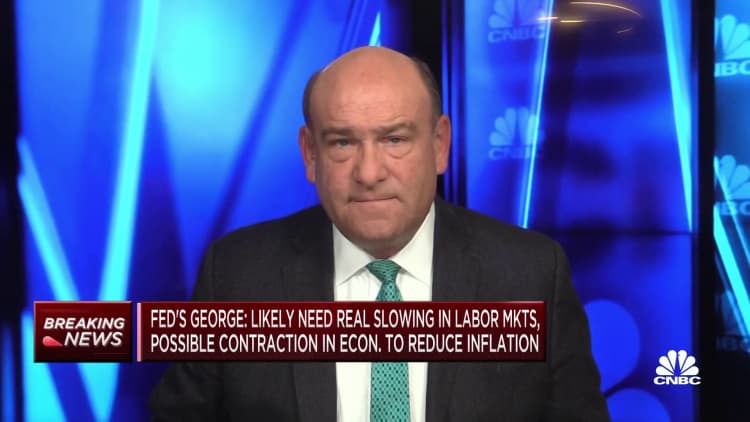 St. Louis Federal Reserve President James Bullard said Thursday the central bank still has a lot of work to do before it brings inflation under control.

A voting member on the rate-setting Federal Open Market Committee, Bullard delivered remarks centered on a rules-based approach to policymaking. Using standards set by Stanford economics professor John Taylor, Bullard insisted that the moves the Fed has made so far are insufficient.

"Thus far, the change in the monetary policy stance appears to have had only limited effects on observed inflation, but market pricing suggests disinflation is expected in 2023," he said.

Even using assumptions he characterized as "generous" regarding the progress the Fed has made so far in its inflation fight, he noted in a series of slides that "the policy rate is not yet in a zone that may be considered sufficiently restrictive."

"To attain a sufficiently restrictive level, the policy rate will need to be increased further," he added in the presentation.

Recent data has indicated the pace of inflation could be slowing. The consumer price index for October increased 0.4%, below market expectations, and the annual pace is down to 7.7%, off the 41-year high reached in the summer but still well above the Fed's 2% target. Another measure Fed officials prefer has core inflation, excluding food and energy, at 5.1% annually, but that is still out of line with the goal.

There's little if any dissent on the Fed over whether rates need to continue to rise. Most members have suggested a few more increases over the next several months that will take the central bank's benchmark overnight borrowing rate to around 5% from its current target range of 3.75%-4%.

However, Bullard's presentation contended that 5% could serve as the low range for the where the funds rate needs to be, and that upper bound could be closer to 7%. That is well out of sync with current market pricing, which also sees the fed funds rate topping out around 5% by mid-2023.

The Taylor Rule, as it is known, establishes a link between what the funds rate needs to be compared with inflation and economic growth. Inflation growth has abated recently, but the annual rate remains around the highest in more than 40 years.

Bullard's remarks follow statements from multiple other Fed officials expressing the need to keep up the heat against inflation, though several said policymakers could ease up a bit from the level of recent increases. The Fed has approved four consecutive 0.75 percentage point rate hikes, and markets widely expect the December FOMC meeting to yield a 0.5 percentage point move.

Despite backing the continued rate increases, Kansas City Fed President Esther George told The Wall Street Journal, in a report dated Wednesday, that she is concerned over the impact the policy tightening could have on the economy.

"I have not in my 40 years with the Fed seen a time of this kind of tightening that you didn't get some painful outcomes," George told the Journal, listing a "contraction" as part of the potential results.

George also is a voter on the FOMC.

In other recent remarks, Fed Governor Christopher Waller said Wednesday he's open to the idea of "stepping down" the level of rate hikes but added he will need to see more evidence before he is persuaded by recent data suggesting inflation has plateaued.

Also, San Francisco Fed President Mary Daly told CNBC on Wednesday that she expects more rate rises and that a "pause is off the table" even with a lower level of rate increases.

Another slew of Fed speakers is on tap for Thursday, including several regional presidents and Governor Michelle Bowman.