Painting a Profit: 10-Year Boom Ahead for Art?

The art market is to experience a "10-year boom" according to an expert, as investors from China and the Middle East drive demand towards unprecedented levels.

"You're seeing a huge influx of money into the London and New York markets. I think we're going to see a 10-year boom in the art market," Phillip Hoffman, CEO of the Fine Art Fund Group, told CNBC on Friday.

That influx is being driven by the Middle East in particular, as vast museums spring up in Qatar and Abu Dhabi to create demand in areas which previously made up just a small part of the total market. Investors in these countries now have the finances to satisfy this demand and as a result their share of the market has increased exponentially. 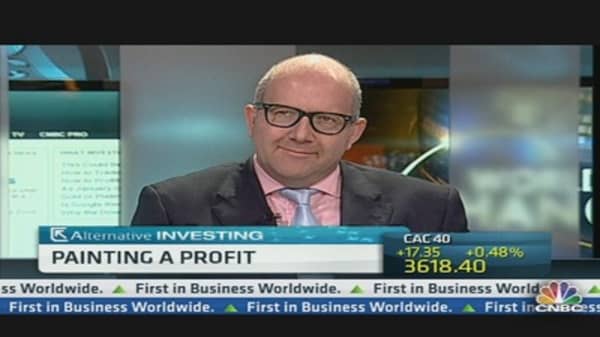 "Qatar are buying about $2.5 billion of a $10 billion market … for their museum. Abu Dhabi are looking next, they're building a huge museum. Saudi will probably be next".

Auction house Sotheby's recorded its second-highest Impressionist and Modern Art sale ever in London this week, raising a total of $190.5 million during the course of its sales evening. Pablo Picasso's Femme Assise Pres D'une Fenetre was the showpiece, fetching $45 million, while another Picasso – Tete de Mort et Livre – sold for a cool $2 million.

"The hot area right now is contemporary and modern. I think next week you'll see some blockbuster prices," Hoffman added.

Demand is coming from China too, where interest in impressionist art has taken off in recent years. About 3000 pictures a year make up the available investable art, which China has been snapping up in a frenzy as it has become a major player in the market.

"The Chinese are absolutely fascinated by this market. If you looked back ten years, China represented about 5 percent of the buying in the art market. It's now 30 percent. It's overtaken the U.S."

"London season" sees a contemporary week follow hot on the heels of this impressionist week before New York takes center stage in May, and the big spending shows no sign of abating.