When It Comes to Health-Care Reform, the IRS Rules 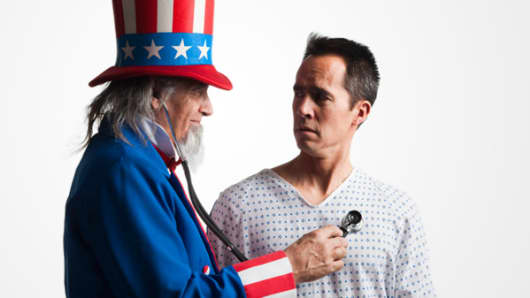 Get ready for the Internal Revenue Service to play a dominant role in health care. When Obamacare takes full effect next year, the agency will enforce most of the laws involved in the reform—even deciding who gets included in the health-care mandate.

"The impact of the IRS on health-care reform is huge," said Paul Hamburger, a partner and employee benefits lawyer at Proskauer.

"Other agencies like Social Security will be checking for mistakes, but the IRS is the key enforcer," Hamburger said. "It's also going to help manage who might get health care."

In its 5-4 ruling last year, the Supreme Court upheld the law's mandate that Americans have health insurance, saying that Congress can enforce the mandate under its taxing authority and through the IRS.

As a result, the agency has to administer 47 tax provisions under Obamacare. They include the right to levy a penalty against businesses and individuals who don't provide or acquire insurance. Noting that the IRS will collect the penalties, the decision labeled them a tax.

The IRS also has to determine how to distribute annual subsidies to 18 million people who make less than $45,000 a year and thus qualify for subsidies in buying health coverage, as well as how to deliver tax credits to small businesses that buy coverage for workers.

In addition, the agency will collect taxes on medical devices and a Medicare surtax on people making more than $200,000 a year, as well as conducting compliance audits of tax-exempt hospitals.

The financial burden for all this IRS enforcement is expected to total $881 million for fiscal years 2010 through 2013, according to the Treasury Department.

But former IRS Commissioner Douglas Shulman told Congress last year that he would need another $13.1 billion for the job in 2014. It's uncertain as to whether the funds will be forthcoming from Congress, which has cut the IRS's budget in each of the past two years.

One step the IRS has taken on health-care exchanges is drawing another round of lawsuits that accuse it of forcing more people into the system.

Each state has been offered the chance to set up its own health-care exchange to allow residents to buy insurance at lower cost and with some financial assistance. If states choose not to set up an exchange, the federal government will run them.

Twenty-six states have said they will not set up their own exchange; seven others have opted to help organize them but not fund them. Because the exchanges are federally funded, residents in those 33 states would not be eligible for federal subsidies. But the IRS stated last year that they would be eligible for health-care premium subsidies.

Individual and small business owners coordinated by the Competitive Enterprise Institute filed suit against the decision in federal court in Washington last week. It contends that the ruling would force more businesses and people (who would probably be exempt from the mandate without the subsidies) into buying health insurance and subsequent penalties if they failed to purchase it.

The agency has not responded to the lawsuit.

"The IRS has a lot on its hands when it comes to Obamacare," Hamburger said. "There will be some rough spots ahead. There really hasn't been anything like this in decades in terms of sweeping reform legislation."

It's not clear if the IRS is to blame for one rough spot that has been encountered.

Saying that it can't meet the 2014 deadline, the Obama administration is delaying parts of the program intended to provide affordable coverage to small businesses and their workers. Instead of a marketplace with choices in the 33 states with federally run exchanges, small businesses will be limited to a more costly single plan until 2015.

What the IRS can actually enforce also seems a difficult question.

The law severely limits the agency's ability to collect penalties. It can ask for the money, but there are no civil or criminal penalties for refusing to pay it. The IRS cannot seize bank accounts or dock wages to collect it. No interest accumulates for unpaid penalties.The law allows the IRS to withhold tax refunds to collect the penalty but only if someone overpaid taxes.

And the IRS is still working on procedures for taxpayers to prove they have insurance.

Some of Obamcare is in effect. Parents can keep their children on their health insurance plans until age 26. The 2.3 percent tax on those making more than $200,000 to help pay for Medicare expansion is also on the books.

Upcoming provisions include that insurers cannot refuse coverage for preexisting illnesses, as well the individual and business mandates.

An estimated 27 million people will be eligible for health care by 2017, according to the Congressional Budget Office. That kind of number is going to put the IRS on the firing line, Hamburger said.

"They are preparing for it, but it's going to be tough to say the least," Hamburger said. "To know for sure if the IRS will be ready to handle in 2014 is hard to guess. But health-care reform is not going away, so they better be as ready as possible."