Attention Boomers: The Economy Needs You to Work Past 70 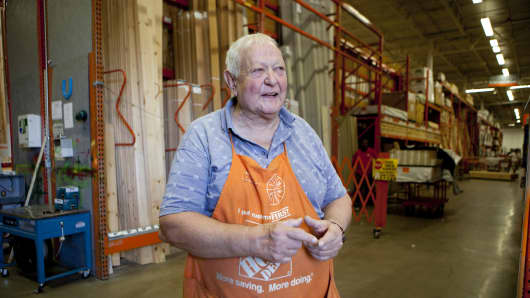 If you imagine that age 81 means shuffleboard, golf carts, and sitting on the beach, David Mintz will make you reconsider. The founder and CEO of food brand Tofutti, Mintz works 15-hour shifts, sometimes driving 500 miles a day to visit his factories. He sleeps four or five hours a night and works out every morning. "I'm working harder now than 20 years ago," he says.

Mintz and others like him are leading a shift toward working later into life. Just 11 percent of people older than age 65 were still working in 1993, according to the Bureau of Labor Statistics. Today, that figure has reached almost 18 percent – and it's climbing.

Most of these workers are not just putting in a few hours: A 2008 study of people age 50 and older who retired and then went back to work found that 54 percent were employed full time and 19 percent worked more than 41 hours a week.

(More from the Fiscal Times: 7 Reasons You Shouldn't Retire Now)

All of this could mean good news for the larger economy. As baby boomers move into their later years, the 65-and-over population will grow from about 13 percent in 2010 to a projected 20 percent by 2030. The rising population of seniors who work will bring stronger economic growth – if companies can retool to accommodate an older workforce, say economists and experts.

But if companies fail to plan ahead, they might also see costs mount: By one estimate, health insurance premiums for workers age 65 and older cost companies almost three times as much as those age 25.

People working in their later years could help with the country's fiscal problems, says Gary Burtless, a Brookings Institution economist who is finalizing a study on the issue. Every additional year that a person stays on the job brings more revenue to the federal treasury in income taxes. If current trends continue, working seniors will have a positive, if small, impact on federal deficits under the most plausible budget projections.

More working seniors also could lower demand for social services by cutting the number of Americans who don't have enough money in retirement. In 2008, the federal and state governments spent nearly $15,000 per elderly person on income security and tax credits, according to a report earlier this year from the Urban Institute. Every year that a person delays taking Social Security past his or her full retirement age (anywhere from age 65 to 67, depending on the date of birth), the check amount grows by 8 percent, says Sara Rix, who focuses on the economics of aging at AARP's Public Policy Institute.

That continues up to age 70, when everyone must draw a check. "You're not going to get that [8-percent] return anywhere else… and it's a guarantee," Rix says.

It may be hard to imagine with unemployment at 7.5 percent, but more seniors on the job could help alleviate a labor shortage in the years ahead. That's because the U.S. population is aging: While the proportion of seniors is growing, the percentage of those in their prime working age is stagnating, says Richard Johnson, an economist who directs the Urban Institute's retirement policy program. By 2030, if people retire at age 65, the number of workers per retiree will drop from 4.5 to 3, according to a 2010 study by the Rand Corporation.

"We really need older people to stay in the labor force to provide the workers that the economy needs to continue to grow," says Johnson. In an April 2012 survey of 430 human resource professionals, 72 percent said the loss of talented older workers poses a problem or potential problem for their organization.

(More from the Fiscal Times: 6 Beautiful and Affordable Places to Retire Abroad)

If younger people worry that older colleagues staying on the job might cut into their opportunities, those fears aren't supported by recent data. A study last fall by the Pew Economic Mobility Project found that from 1977−2011, every one percentage-point increase in the employment rate of older workers was associated with a slight decline in youth unemployment. That's partly because employed older workers also create jobs by starting businesses themselves, or offer skills that allow companies to expand operations.

But other experts worry that later retirement could shrink company bottom lines if the workers who stay do so because they don't have enough retirement savings. The typical household, age 55-64, had only $120,000 in their 401(k) or IRA account in 2010, according to a study last summer from Boston College's Center for Retirement Research. The report also noted that 13 percent of those ages 60-64 had no retirement account at all.

Those who feel obligated to keep working tend to have worse health and work in jobs that are more strenuous, compared with older knowledge workers who choose to keep going. Susan Conrad of Plancorp Retirement Plan Advisors says that among this group, health care, workers' compensation, and disability costs are higher than for others, while productivity is lower. A study by MassMutual Financial Group calculated that for companies with more than a thousand employees, increasing the portion of their workforce of those over age 60 from 10 percent to 30 percent hiked their health care and disabilities costs by about $2 million. Johnson also estimates that a company spends an average of about a thousand dollars more per year for an older worker.

Johnson argues, however, that there's not much evidence that older workers are less productive – their productivity simply takes different forms. They may make fewer creative breakthroughs and process information more slowly, in general, but their knowledge and experience improve with age. An older telephone salesperson might make fewer calls, for example, but sell more by drawing on years of experience, he says.

(More From The Fiscal Times: 7 Ways Boomers are Changing How We Retire)

A possible worker shortage in some fields is causing a number of companies to retool their operations to retain older workers. The shortage of nurses, for example, has led hospitals to redesign layouts so that work stations are closer to patients, says Jacquelyn James of Boston College's Sloan Center on Aging & Work. And the shortage of truck drivers has some companies redesigning vehicles to create more comfortable sleeping spaces, she says. Other firms are changing work schedules: The April 2012 survey of human resource professionals found that about a quarter of companies are offering more flexible work arrangements and part-time positions to attract older workers.

With U.S. birth rates dropping and the population getting older, encouraging more companies to create incentives for older workers to delay their retirement parties could benefit us all, says Johnson.